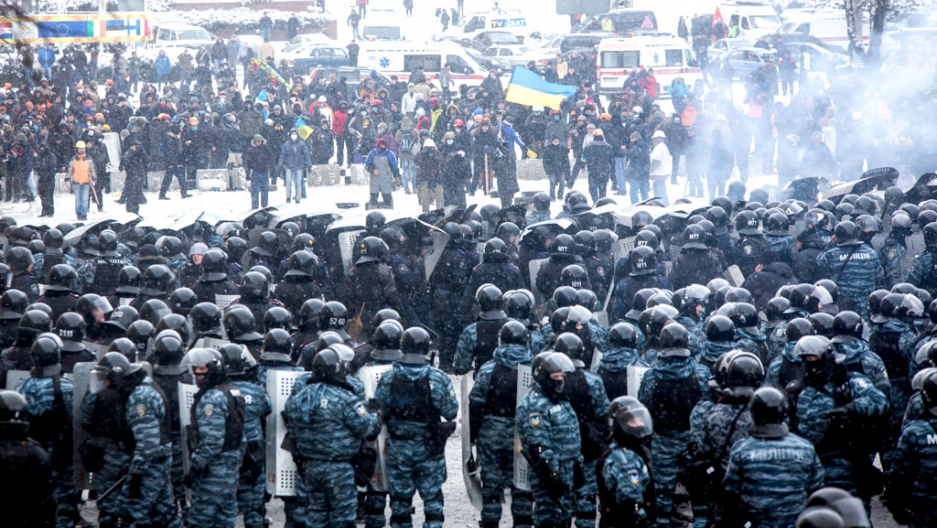 Protesters clash with police in the center of Kiev on January 22, 2014.
Credit: AFP
Share

Fierce clashes in Ukraine let up on Thursday after anti-government protesters agreed to a truce while opposition leaders met President Viktor Yanukovych.

The respite came after a day of bloody clashes in the capital of Kyiv, when at least three protesters reportedly died, two of them from gunshot wounds. The deaths were the first in months-long protests in Ukraine.

More from GlobalPost: What we saw on the ground in bloody, violent Kyiv

Demonstrators fortified their barricades overnight on Thursday with sandbags stuffed with snow while their frontlines were marked by burning tires.

The protests in Ukraine began in November, when Yanukovych rejected a deal with the European Union and forged closer ties with Russia.

A correspondent for Agence France-Presse in Lviv said demonstrators pushed past guards and stormed the offices of regional Gov. Oleg Salo.

The protesters found Salo and surrounded him, saying they wouldn't leave until he resigned. Salo, who was appointed by Yanukovych, reportedly signed the resignation and handed it over to the crowd.

No plans for state of emergency

Yanukovych told the European Commission chief Jose Manuel Barroso that he doesn't plan to introduce a state of emergency.

A spokesman for the Commission said Ukraine's president "reassured Barroso that it was not foreseen to install a state of emergency in Ukraine."

More from GlobalPost: Dramatic images of molotov cocktails and tear gas raining down on protesters in Kyiv

Olivier Bailly said the Commission wants "to see the situation calm down, the ending of violence against peaceful demonstrators and journalists." The EU "wanted to help" Ukraine hold dialogue.

German Chancellor Angela Merkel said, "We expect the Ukrainian government to ensure basic rights — particularly the possibility to stage peaceful demonstrations, to protect lives and that violence is not used."

Here are some of the dramatic scenes from the last few days, along with videos shared on social media of the clashes. GlobalPost did not verify the authenticity of the videos:

[View the story "17 dramatic scenes from Kyiv, Ukraine" on Storify]