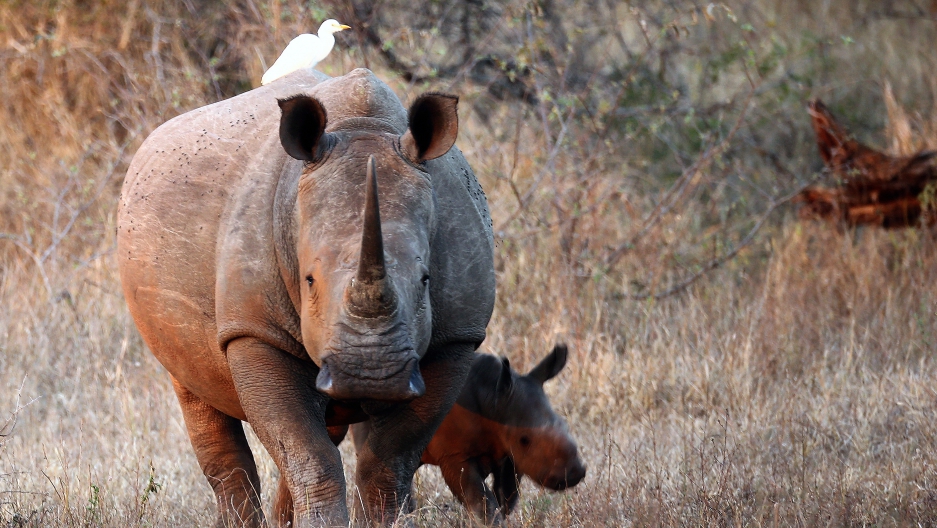 JOHANNESBURG, South Africa — The rhinoceros has become the cause du jour in South Africa, its image emblazoned on everything from wine bottles to shopping bags to rhino-shaped candles and rhino hoof-shaped gummy sweets.

Cars have kitschy plastic rhino horns strapped to the front and “Save the Rhino” bumper stickers plastered on the back. You can even buy bracelets adorned with tiny silver rhinos. They’re all part of the ever-expanding fundraising effort to help protect these iconic animals from ruthless poachers who kill them and hack off their horns.

But South Africa is losing its battle to save the rhino.

Hunted to near extinction in the 19th century before being rescued by conservationists in South Africa in the 1950s, the world’s biggest rhino population is once again under threat. Despite a myriad of efforts to raise money and awareness, the poaching wave that began in 2008 is only getting worse, year after year.

Government officials announced Friday that a record 1,004 rhinos were killed in 2013 — a significant jump from 668 the year before.

Experts say that with international organized crime syndicates behind the poaching, the problem is much bigger than South Africa, and that not enough is being done outside this country’s borders to stop it.

Mike Knight, who chairs the Rhino Management Group for southern Africa, said the poaching can’t be stopped without addressing the source of the problem: demand from countries like Vietnam and China. There, rhino horn is a pricey “medicine” ground up and ingested in the false belief it can cure everything from cancer to a hangover. Recently, rhino horn has also become a trendy party drug for the rich, despite its lack of any measurable effects.

A black dehorned rhinoceros walks at the Bona Bona Game Reseve, 200 kms southeast of Johannesburg. The animals' distinctive horns are hacked off by poachers to be smuggled to the lucrative Asian black market. (Stephane de Sakutin/AFP/Getty Images)

More from GlobalPost: Rhino horn is the new cocaine

Knight said there needs to be more intelligence-sharing between countries to counter poaching syndicates. The gangs behind the trade in rhino horn, he added, are also involved in trafficking guns, drugs and people.

“We’re trying to do as much as we possibly can here to slow down the rate of increase in poaching. But we can only do so much,” Knight said.

“The rhino crisis is not an African issue, it’s an international issue. If we do not have the full cooperation of regional and international partners, we are basically fighting a losing battle.”

Already in 2014, 43 rhinos have been killed by poachers, nearly all of them inside Kruger National Park, a popular safari destination for tourists. Of the 1,004 rhinos killed last year, 606 were in the park, a protected area.

Mozambique, which borders the Kruger reserve, has emerged as a transit point for rhino horns being smuggled out of Africa, and as a base for poachers crossing into the park.

South Africa's national parks authority said that more than 80 percent of incursions by poachers come from the Mozambican side of the park. Up to 15 heavily armed groups of poachers operate in the Kruger reserve at any time; they're especially active during full moons, when it is easier to see targets at night.

This has turned the Kruger park into a battlefield. Already this year, 11 suspected poachers have been killed in shootouts with park rangers and soldiers stationed at Kruger to protect the rhinos, officials revealed on Tuesday.

Tom Milliken, rhino expert for TRAFFIC, an organization that monitors trade in wildlife, said that both South Africa and Mozambique need to “decisively up their game” if they hope to stop the killing of rhinos.

“Rhino horn trafficking and consumption are not simply environmental issues, they represent threats to the very fabric of society,” he said in a statement.

Julian Rademeyer, author of the book “Killing for Profit: Exposing the Illegal Rhino Horn Trade,” said the poaching crisis is likely to get worse this year due in part to South Africa’s inability to tackle organized crime groups.

“If the trend is anything to go by in recent years, we’re going to see a lot more than 1,000 rhinos killed,” he said. “We don’t have a handle on organized crime in this country.”

Rademeyer said there is also a lack of urgency on the issue internationally, with plenty of meetings and conferences held to discuss the problem but not much action.

“The crisis is at the point where we have just about run out of time,” he said.

Then he amended his statement: “We already have run out of time.”