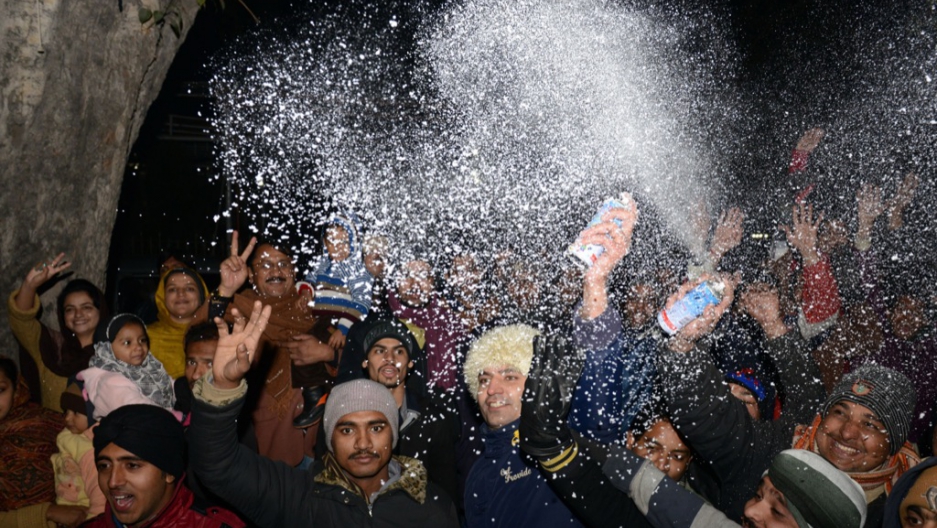 KARACHI, Pakistan — When the clock struck midnight this past New Year's Eve, instead of celebrating, I sat wincing as the air around me resonated with a familiar popping noise.

The sky was spotted with the occasional firework, sure. But this was the unmistakeable sound of AK-47s firing freely into the darkness.

Ah, aerial firing, the act of pointing a rifle into the air and shooting at nothing. It isn't a celebratory gesture specific to Pakistan — it happens among trigger-happy populations all over the world — but I've never been able to get used to the sound of jubilant whooping accompanied by gunshots. In spite of my many years in gun-loving Texas, the first time I heard firing like this was in Karachi in 2009, when Pakistan defeated Sri Lanka in the International Twenty20 cricket championship.

That summer night, it seemed like everyone who owned a Kalashnikov was out on the street. (Though the Small Arms Survey estimated in 2011 that there are just 12 civilian firearms for every 100 people in Pakistan — versus 89 per 100 in the US — I see more guns every day in Karachi than I did in a usual month in Texas.) I remember being naively horrified that police allowed the practice, an open admission of unregulated weapons ownership.

The next day, I learned something even worse: the bullets from aerial firing can kill. A fellow intern at a local news magazine where I was working watched a stray bullet pierce her older brother's skull as they stood on their roof celebrating the cricket win. He died two days later.

In the last year, I've heard various news reports of lives lost by stray gunfire after aerial firing. But there's no organization tallying up the injuries and deaths, and records on the number of people killed by stray bullets are impossible to find.

Since the late 1970s, the AK-47 has become a common sight in Karachi. By 1987, it was the weapon of choice for criminals in Pakistan, introduced into the country by the nascent jihadist groups that were appearing all over the country.

Though by some accounts use of the weapon has dwindled in recent years, its ubiquity and the gun culture it introduced hasn't. It's not just the aerial firing; arms are used to resolve any number of personal disputes in this country. There's even a thriving local economy devoted to making copies of the Russian assault rifle — Pakistan manufactures Russian, Chinese and Pakistani models of the popular gun for civilian purchase.

Every security guard I've seen — and these men litter the streets of Karachi — has a rifle slung around his shoulder. I've watched boys shorter than their rifles fire blanks and heard of 12-year-olds using stray cats for target practice. Everyone laments the homicide rate in Karachi, but the same people encourage their sons to learn to shoot a weapon. Boys of every class aspire to own their own rifle.

I've pointed out the disconnect to others, and have heard the same thing in response many times: It's a Kalashnikov culture in Pakistan, and I should focus my attention on the fact that there are no enforced gun laws, not that there are too many guns.

This year, Karachi's beleaguered police force at least attempted to limit aerial firing. Ahead of New Year's Eay, they even announced that the practice was banned over the holiday, and that anyone caught participating would be arrested.

From the noises I heard at the dawn of 2014, however, it didn't seem like many Karachiites believed that rule would be enforced. By late the next morning, one person had been confirmed dead and at least 10 were injured.