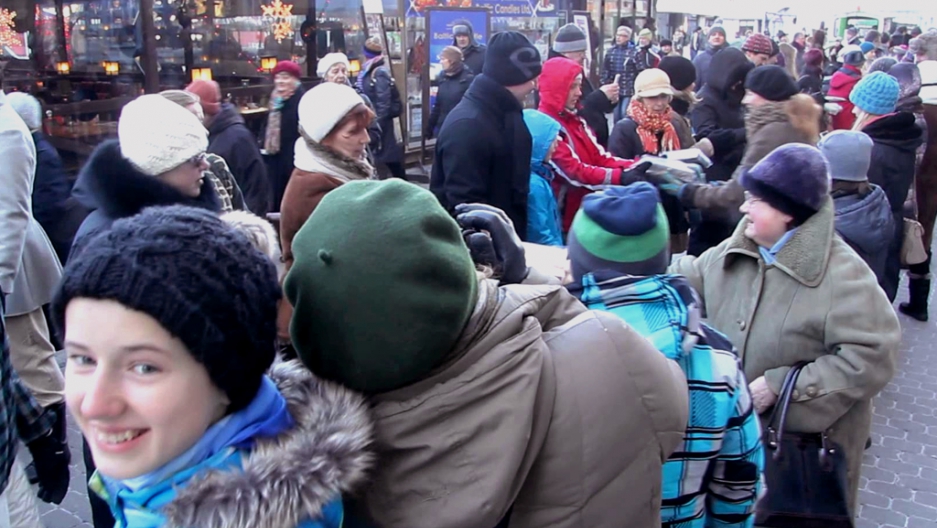 On Saturday, about 14,000 people in Latvia's capital formed a human chain of book lovers to kick off Riga's year as a 2014 European Capital of Culture. The crowd braved icy temperatures to pass library books — by hand — from the old National Library to the new building 1.2 miles (2 km) away. As you can see from this video, there was much dancing and rejoicing:

According to the AFP, Saturday's event recalled 1989 Baltic Way, a peaceful demonstration by citizens of the Baltics to demand independence from the Soviet Union. On Aug. 23, 1989, some 2 million people joined hands to create a massive human chain. They stretched 370 miles (600 km) and linked the Baltic capitals of Vilnius (Lithuania), Riga (Latvia) and Tallinn (Estonia). Within two years, all three countries were independent.

"The people who stood in the Baltic Way remember that feeling of being shoulder to shoulder with complete strangers. The people taking part in the book chain who are prepared to stand here on a cold winter day are taking this seriously too - we are literally standing up for culture."

More than 2,000 books were passed to the new National Library, with the rest (about 4 million) to be delivered later in a more conventional manner. The new building — dubbed "Gaismas Pils" (Palace of Light) — was designed by Latvian-born US architect Gunnar Birkerts and will open in August.

2014 is a major year for Latvia. The country adopted the euro on January 1 and is now one of the fastest growing economies in the European Union. As part of its cultural duties, Riga will host more than 200 events this year, including concerts, exhibitions, festivals, conferences and performances.