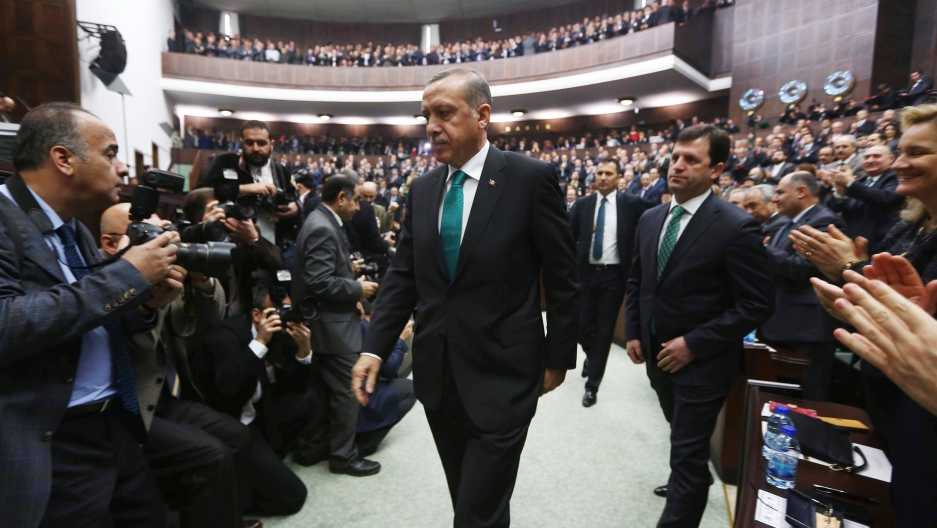 Turkey's Prime Minister Recep Tayyip Erdogan arrives to deliver a speech to the members of the Turkish Parliament in Ankara on January 14, 2014. Erdogan said his government was ready to withdraw a contentious bill curbing the power of judges — on certain conditions. "If the opposition agrees to constitutional changes governing this issue (the judiciary), we will freeze the proposal and if necessary will stop it from reaching the full parliament," Erdogan told his party in parliament.
Credit: Adem Altan
Share

That may not be surprising for this neighborhood, where Erdogan spent his teenage years. Elsewhere, however, others are beginning to question the motives of a leader who's becoming increasingly divisive.

For the past month, the government has been embroiled in a scandal over illicit property deals that's claimed three government ministers and dozens of parliament members. The unprecedented charges against officials from Erdogan's AK Party and their families have set off a power struggle between the government and the informal movement led by exiled cleric Fethullah Gulen, who's believed to have millions of  followers. The scandal has also raised fears that Erdogan may not be the democratic role-model Western governments and investors had held him to be.

Since news of the police investigation broke on December 17, Erdogan and others in the ruling Islamist-leaning AK Party have accused Gulen's supporters  — who dominate the country’s police and judiciary — of orchestrating the affair for political reasons. The AK Party has also retaliated by firing hundreds of police officers and reassigning police chiefs and judicial prosecutors, while Erdogan has sped up plans to transfer judicial power from the Supreme Council of Judges and Prosecutors to the Justice Minister. This week, President Abdullah Gul, who's seen as a more moderate force in the AK Party, signaled he may veto the move.

In Kasimpasa, however, admiration for Erdogan continues unabated. Twenty-eight-year-old Ismail, a security guard at a soccer stadium named after the prime minister, downplayed the political crisis.

“It’s similar to what’s been happening in Egypt," he says. "But Turkey’s not going to turn out like that because all people here love Erdogan and are behind him.”

“What Erdogan is doing is telling the world that the Ottomans are back," he adds. "Not in a violent or negative way, but that Turkey will become a global power."

It was here that Erdogan spent his teenage years during the 1960s selling lemonade and simit, the popular ring-shaped bread, a background that instilled in him "both an Islamic piety and a business-minded pragmatism,” according to the Turkish newspaper, Hurriyet.

At Istanbul’s Marmara University in the 1970s, Erdogan fed his interest in politics by joining the National Turkish Student Union and later, an Islamist party led by conservative politician Necmettin Erbakan, who would become prime minister in 1996 and often clashed both with Turkey’s powerful military and secular-minded Turks.

Kemal Kirişci, a Turkey expert at the Brookings Institution, said that the 1970s was a time when Turkish politics became diversified.

“One person who led to the opening of political space was Erbakan. He had an important electoral base then,” he said. “And that’s what was happening in Turkey when Erdogan began taking an interest in politics.”

Erdogan swiftly climbed the political ladder, serving as mayor of Istanbul from 1994 to 1998 until he was jailed for four months for giving a speech in public that was considered an attack against the ruling military. But by 2003, he was elected prime minister as head of the newly formed AK Party, and has remained in the post ever since.

Calls by GlobalPost to aides of Egemen Bagis, Turkey’s European Union Minister until his resignation in late December, were not returned. Attempts on Thursday to contact the AK Party spokesman Huseyin Celik also went unanswered.

With the government facing its biggest crisis for over 10 years, local elections in March — including for the post of mayor of Istanbul — are set to be hotly contested. Altough banners and buntings have yet to appear on the streets and avenues of Istanbul, the battle for the city’s top post is well underway.

Analysts see the city as a microcosm of the wider country, making Istanbul’s mayorship rich in political promise. Five years after Erdogan left the post, his newly-formed AK Party cruised to election victory.

“The Istanbul mayoral election may be more about the prime minister himself. I suspect many voters will cast their vote with national politics in mind rather than Istanbul issues,” said Kirişci of Brookings.

Despite the challenges to the government’s domination, supporters of Erdogan appear energized by recent events: Kasimpasa residents interviewed for this story said they believed Topbas would easily be reelected in March.

Yilmaz Nur, dressed all in black, surveys the street before him from a non-descript doorway facing the Recep Tayyip Erdogan soccer stadium.

“Foreign countries won’t be successful against Turkey,” he says, his words echoing common political rhetoric about foreign powers being behind the local Turkish opposition. “You can’t know what bad people will do in the future. But as a country, we are ready for them.”