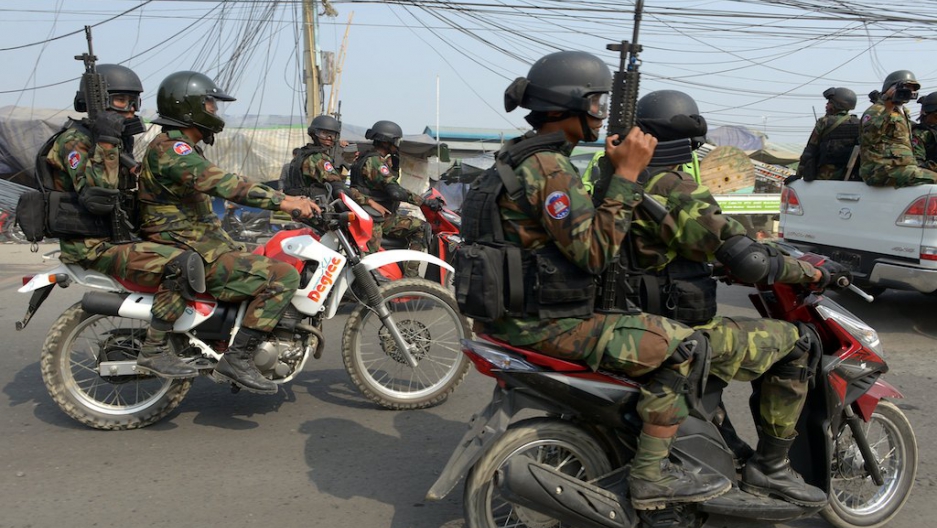 Cambodian soldiers dispersed opposition protesters from their rally base in the capital and halted further protests against the kingdom's strongman premier, on Jan. 4, 2014, a day after a deadly crackdown on striking garment workers.
Credit: Tang Chhin Sothy
Share

PHNOM PENH, Cambodia — In the Canadia Industrial Park, factories are mostly back in operation, bustling to fulfill orders for major Western labels. There are few signs of the brutal crackdown that recently afflicted this complex on the Cambodian capital’s southern outskirts.

Two weeks ago, the Cambodian military wielded guns and steel pipes to break up strikes by garment workers, who oppose the country’s new $95 monthly minimum wage. Five demonstrators died and dozens were injured.

Tensions remain high. The Cambodian government has banned protests indefinitely. More than 100 factory owners have gone on the offensive, filing lawsuits against the labor unions and claiming enormous losses and property damage.

Meanwhile, critics are irate over allegations that foreign governments — and particularly South Korea, a major investor — played a behind-the-scenes role in the events leading up to the Cambodian military’s crackdown. They contend that the Korean embassy in Phnom Penh shares blame because it lobbied an official from an elite agency whose role has nothing to do with labor strikes: the country’s National Counter-Terrorism Committee (NCTC).

As GlobalPost first reported, after the violence the embassy posted a statement explaining that it had appealed to military and counter-terrorism officials to protect Korean factories. “We believe that these efforts prompted deep consideration from government authorities and prompted them to a rapid response,” the embassy wrote.

The statement was quickly removed after it garnered disparaging comments.

In a subsequent letter to GlobalPost, Korea’s foreign affairs ministry argued that it was merely fulfilling its duty on behalf of Korean investors and did not urge a crackdown. It added that the Japanese and Chinese governments had reportedly made “similar requests.”

The Japanese embassy in Phnom Penh declined to comment. A spokesperson at the Chinese embassy could not be reached.

South Korea has not condemned the military’s violence against protesters. In a separate statement issued Jan. 15, the embassy indicated that Korean companies were the real “victims” in this dustup. It also distanced itself from its original narrative, claiming it briefly met with a civilian NCTC member (who holds two other top postings) rather than lodging an official appeal with the body.

“This is an extraordinary intervention to seek the protection of South Korean investments in the garment industry by providing physical security for the manufacturing plants and to break up worker strikes,” Thayer added. “The Korean embassy staff represent a democratic country that should show due respect for civil, political and human rights.”

Ever since President George W. Bush launched the “war on terror” 2001, many leaders — from Egypt to Myanmar to the streets of New York and beyond — have used counter-terrorism as a pretext for crushing adversaries.

By all appearances, the leaders of the NCTC — a powerful, well-funded body with a brigade-sized military unit reportedly in the hundreds — operate similarly, keeping an eye on legitimate opponents of the country’s longtime strongman, Prime Minister Hun Sen.

This committee functions at the highest level of the Cambodian government. It is chaired by the prime minister himself, and manned by his close ally, Om Yentieng. The prime minister’s son, West Point graduate Lieutenant General Hun Manet, commands its American-trained special forces unit. Experts tell GlobalPost that the NCTC acts as a personal intelligence service for the prime minister.

Despite the high-level attention and resources, Cambodia is not believed to be a terrorist target. Of the many problems that this impoverished Southeast Asian nation suffers, for nearly a decade terrorist violence has not been one of them.

While the NCTC is largely a civilian agency, it operates an elite special forces unit established in the mid-2000s with assistance from the US, Australia and South Korea, according to leaked American diplomatic cables. At the time, Washington was concerned that fundamentalist Islam may have been captivating the country’s Cham Muslim minority. South Korea’s role was likely motivated by its desire to gather intelligence on North Korean activities in Cambodia, according to Thayer.

Aside from a foreign-led bomb plot against the British and US embassies — foiled over a decade ago — for years the State Department has reported that Cambodia has not witnessed any terrorist incidents or significant activity.

With no authentic terrorists to pursue, Cambodia is known to have used the counter-terrorism label to target opposition party members, Buddhist monks, land rights protesters, and at least one persecuted ethnic minority.

In March 2013, Cambodian authorities accused a group of ethnic Khmer Krom asylum seekers in Thailand of creating an armed terrorist organization. The group had joined a peaceful opposition group based in Denmark. They were sent back to Phnom Penh and imprisoned under mysterious circumstances.

In 2009, a prominent activist fled the northeast when a court threatened to charge him with terrorist activities. The crime? Organizing protests against Cambodia’s notorious land-grabs, through which the government confiscates homes and farms in support of money-making schemes.

The NCTC has also absorbed parts of military units that “historically [have] blood on their hands,” pointed out Phil Robertson, deputy Asia director for Human Rights Watch. These include elements of Brigade 70, an elite force, “and Prime Minister Hun’s Sen’s bodyguard unit, who have been implicated in serious human rights abuses,” he added.

In suppressing the garment strikes, experts tell GlobalPost that the NCTC would not have needed to send its own operatives, given that the leaders in the committee hold sway over other military units. But Human Rights Watch told GlobalPost that armed NCTC personnel, who operate secretively and are not always easy to spot, have been present at demonstrations in recent months.

“The South Korean government should have directed its request to the police, who are the authorities who should be responsible for maintaining law and order,” Robertson said. “Human Rights Watch can see no plausible justification for Seoul to classify or consider this matter a ‘terrorist’ matter that would require the involvement of the NCTC.”

Putting out the fire

Neil Loughlin, spokesman for the Cambodian rights group Adhoc, concurred with Robertson. He said: “The right to protest is protected under Cambodian law, and even in the event that these protests turn violent I cannot see how this can be regarded as a matter for a committee set up to deal with terrorism.”

In response to written questions submitted by GlobalPost, Korea’s foreign affairs ministry declined to say whether it believed recent demonstrations were linked to terrorism, whether it condemns the use of violence against protestors, and whether it took any measures to ensure authorities would not use excessive force after the embassy expressed its concerns.

The most recent round of labor strikes, which started on Dec. 26, remained tense through the end of 2013, with at least one clash on Dec. 27.

Cambodian authorities at first acted cautiously against the demonstrations thanks to pressure from Western nations on human rights, according to an earlier Korean embassy statement that has since been removed from Facebook. In late December, Korean officials urged the Cambodian government to find a resolution, according to the statement.

Koy Kuong, a Cambodian foreign affairs ministry spokesman, told GlobalPost that he was not aware of any official letter being sent to his ministry or the NCTC regarding the strikes. Pol Chan Virak, a member of the counter-terrorism committee, declined to comment. Hun Manet, the son of the prime minister who leads its special forces unit, could not be reached.

Despite the outcry, military protection for investments is not new in Cambodia. Media reports have detailed the alleged involvement of members of the Royal Cambodian Armed Forces in land-grabs and other instances of state aggression. “Pragmatically, elements of the [Cambodian] military have been known to accept payment for ensuring property protection and security,” Thayer said.