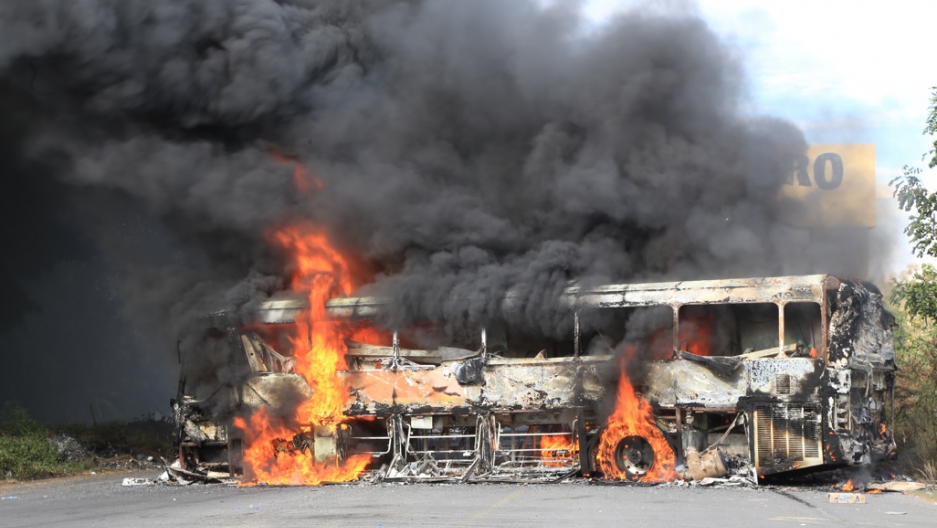 A burning bus in Paracuaro, in Mexico's western Michoacan state, was one of the stark signs of anger against the so-called self-defense militias.
Credit: Enrique Castro
Share

A clash between soldiers and militiamen in one town Monday night ended with multiple deaths — reports vary on how many, but the government has confirmed two fatalities. That's apparently hardened the militia leaders’ resolve to continue fighting.

Militia boss Jose Manuel Mireles, a doctor from Tepalcatepec who's recovering from plane crash injuries in a Mexico City hideout, says the vigilantes won’t give up their weapons until “the government assumes its responsibility” and arrests leaders of the feared Knights Templar cartel.

“When they re-establish the rule of law in all of Michoacan, then we’ll see how to accommodate all the people who out of necessity have to arm themselves,” Mireles told GlobalPost late Monday.

That defiant tone was unexpected. Earlier that day, national media had reported that Mireles said he would heed the authorities’ call for the vigilantes to lay down their weapons (mostly assault rifles and grenades).

The fast-moving events lay bare what’s been a muddled government response to the growing tensions in Michoacan.

Before, federal officials showed tacit, and at times outright, support for the militias, which call themselves “self-defense” groups. Now, the authorities are rushing to head off the advancing militias, who are clearly becoming Mexico’s big security challenge of 2014.

Mexican Interior Secretary Miguel Angel Osorio on Monday said federal forces were taking over security in Michoacan’s coastal lowlands and foothills — the so-called Tierra Caliente, or Hot Country — and demanded that the militias turn in their weapons.

“If we disarm they will kill us,” Estanislao Beltran, another militia leader, told a radio interviewer Tuesday morning, referring to the Knights Templar.

Taking their name from a medieval order of militant monks, the Knights Templar started several years ago as a cult-like offshoot of a feuding drug cartel.

The gang vowed to protect villagers from “materialism, injustice and tyranny.”

Instead, authorities say, they torment townspeople and local governments with extortion, kidnapping and killing, while dominating parts of the US-bound crystal meth smuggling industry.

So civilians armed themselves to defend against the gang's violence. The militia members claim to be farmers and townspeople fed up with the abuse. But many Mexicans accuse the militias of having rival gang connections, too.

And many more accuse local government officials of corruption that allows the violence to keep cycling.

Militia leaders claim that state officials have in fact nurtured the Knights Templar, and that federal officials refuse to go after gang leaders despite knowing where they are.

“I'm not saying the whole government is contaminated,” Beltran said in a radio interview. “But large parts are colluding with the gangsters.”

Read more: This map could mean militia mayhem for Mexico