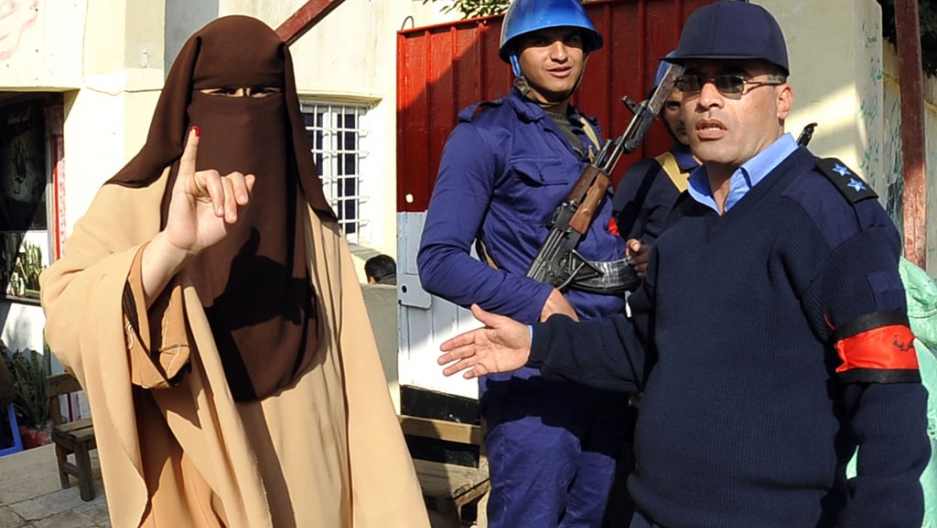 An Egyptian woman leaves a polling station showing her ink-marked finger near security forces standing guard on January 14, 2014 during the vote on a new constitution in the coastal city of Alexandria.
Credit: -
Share

Egyptians lined up to vote on a new constitution despite the threat of violence on Tuesday.

The referendum has been held up by the interim military-backed government as the first step to restoring an elected government since the overthrow of Islamist President Mohamed Morsi last July.

A bomb did explode outside a Cairo court on Tuesday, but no one was injured, according to a police general.

Many also view the referendum as a vote of confidence for Gen. Abdel Fattah al-Sisi, who is contemplating running for president.

"I am voting because it is not only my civic duty, but also to prove that what happened was not a coup," Omar, 24, told Reuters.

The Egyptian government declared the Muslim Brotherhood a terrorist organization on December 25, and has escalated its crackdown on members of the group ever since.

That didn't prevent an Islamist coalition led by Morsi's Brotherhood to call for a boycott of the "sham referendum." The coalition also called for "civilized peaceful protests" during both days of voting.

The Islamists view Sisi as the mastermind of a coup that opened the door to violence and an oppressive police state. However, many Egyptians view Sisi as a stabilizing force.

"We've had no stability for three years. It's chaos," Nayer al-Masri, 35, told Reuters. "We are going out to choose something better for our country."

"We must be with our police and army so that no one can terrorize us. Even if a bomb exploded in my polling station, I would vote," Salwa Abdel Fattah told Agence France-Presse as she waited to vote in Cairo.

External observers have criticized the Egyptian authorities' handling of dissent. The International Commission of Jurists, based in Geneva, called the draft constitution highly flawed.

"The referendum campaign has taken place within a context of fear, intimidation and repression, calling into question the fairness of the entire process," it said in a statement.

Agence France-Presse and Reuters contributed to this report.