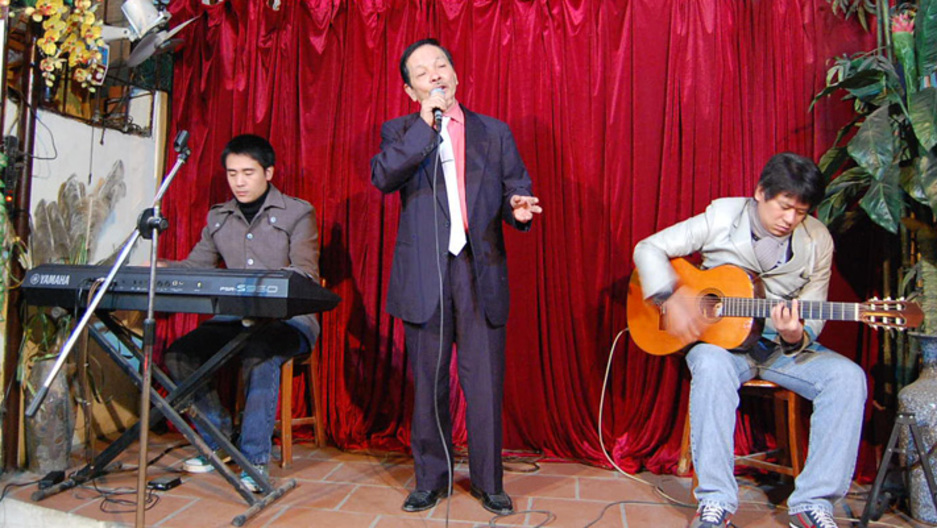 Nguyễn Văn Lộc takes the stage several nights a week at his cafe, performing many of Vietnam’s most popular love songs, in a style called "nhạc trữ tình," which means "romantic music."

During its war with the United States, North Vietnam wasn't just concerned with how the frontline battles were going, or the US air raids on its capital city. The communist leaders were also worried about what its citizens were singing.

The North Vietnamese government only wanted songs that encouraged people to fight for the nation. So most other music was banned, especially love songs.

That is how Nguyễn Văn Lộc ended up spending a decade in prison. Now 69, Nguyễn still remembers the song that got him in trouble. It's called "Niệm Khúc Cuối," or "The Last Song."

He says that when he was put on trial, Nguyễn was accused of singing this classic as a statement against the government.

The song is from a style called "nhạc trữtình," which means "romantic music." Most of it was written in the first half of the 20th century. It is usually about love and loss and broken hearts. Kind of like the blues. Nguyễn's been hearing it for most of his life.

"My father was a beautiful singer," he recalls, "so he'd sing to me this romantic music when I was in the cradle. At night, after work, he'd come home and hold me in his lap, and he sang this music to me. So at 7 or 8 years old, I already remembered the lyrics and melodies of many, many songs."

As a young adult, Nguyen started a trio with two acoustic guitarists. "During our free time, we gathered in a room and we closed the door and we sang to one another. And only a few close friends who really loved this music, we allowed them to join us and listen to us."

They had good reason to keep their music a secret. This was the late 1960s. North Vietnam's war with US and South Vietnamese forces was intensifying.

The communist authority wanted its citizens' minds on victory. Not the achy blues of nhạc trữtình music.

And there was another problem. The music was huge in South Vietnam. Songs like "Suối Mơ," or "Spring Stream," filled Saigon's bars, which were packed with cigarette smoke and American GIs looking for a good time. Văn Cao — now one of Vietnam's most celebrated composers — co-wrote this song, which became part of the soundtrack of South Vietnam's war effort.

So the North officially outlawed most of it as the sound of the anti-communist enemy. Nguyễn and his friends "knew that the state had banned the music, but we just didn't care. And we had no political agenda. We didn't go against any government policies."

But they were breaking the law. Somehow, the police found out. The musicians got called in repeatedly for questioning. Nguyễn says the authorities were sure he and his bandmates were being paid by anti-communist interests in South Vietnam and abroad to stir up trouble. The artists were asked if they were working for spies.

This went on for about a month: the group would be interrogated, and then released.

One day, in the spring of 1968, Nguyen headed down to the station on what he thought was another routine summons. He was 23 and a house painter who'd just fallen in love with a girl he'd met at his clandestine shows. He wouldn't see her again for 10 years.

"I was arrested," Nguyễn recalls, "under the charges of suspicion of spreading the depraved culture of capitalism, and destroying the culture of socialism. And then, they took me back home so they could search my house, but they found nothing but old lyrics and sheet music. That's all."

The whole group was sent to prison. One bandmate got 15 years. Nguyễn Văn Lộc did hard labor, serving out some of his time at the notorious Hanoi Hilton.

The trio's fate was an extreme and unusual one, says Nguyễn ThụyKha, a music journalist, historian and composer.

He says there were smaller cases of backlash or state reprimand, but nothing on the level of Nguyễn Văn Lộc's case. "If someone slipped and sang a little song and others heard it, they may have ended up in political trouble. Like criticism, or it may have affected their jobs. But this is because we were at war at the time."

He served in that war, as a communications expert for the red army. Even as an artist today, he says the wartime ban was necessary if North Vietnam was going to have the backbone it needed to fend off America's Goliath forces.

"Lost. Lost the war — that's what would have happened if we had kept singing those gloomy, weak songs," Nguyễn ThụyKha insists. "Meanwhile, we're living under US bombardment and air attacks. We would just be embracing one another and crying to die, if we sang that music. We couldn't do that."

But once the war had ended and Vietnam was on its way to peace, he says, "we come back and we appreciate the value of this music."

In fact, today Vietnam celebrates its old-school romantic music as part of the national heritage. Nguyễn Văn Lộc still remembers that day he was released in 1978. "I walked from the prison to the railway station to get back home to Hanoi. At that station, he says, "all the cafes were playing romantic music — the music I was arrested and imprisoned for. And I was shocked!"

For Nguyễn, this was like a slap in the face. Both of his bandmates died in poverty after they got out. Over the last three and half decades, he has struggled a lot, too. Mostly, he says, because of his criminal record.

Still, "there's no regret," Nguyễn says, not apologizing for his choices. "If I had regretted it, I wouldn't be here today, still singing."

Nguyễn's story isn't all about loss. That young woman he fell in love with before he was sentenced? They got married, and had 2 kids before she died in 2002. Today, Nguyễn's son is a successful guitarist.

There's also his coffeehouse, which Nguyễn has dedicated to the golden music of Vietnam. It's called "Cafe Lộc Vàng.""Cafe Yellow Lộc."

On a recent Saturday night, a keyboard player and guitarist warmed up on the cafe's small cement stage, in front of a maroon velvet curtain. About two dozen people sat at low tables, listening, and sipping Ha Noi brand beer.

In his beige suit and silk tie, Nguyễn Văn Lộc took the stage. He welcomed the house, then closed his eyes, and there was that voice. It's still has some of that cigarette smoke in it, plus a few drops of the powerful oily green tea he's always pouring for himself.

But mostly, it's romance. It's love — for the music, for this cafe he's built, for his country. And for his late wife, who he says he sometimes sees standing in the corner, listening to him and smiling.

Nguyễn took turns with several artists he'd hand-picked to sing at his cafe. The flowers printed on one woman's blue and yellow silk áo dài — the national dress of Vietnam — seemed as if they were spilling down the front as she sang the classics for an equally well-dressed crowd.

The audience was mostly older, but not entirely. Dinh Van Tien is a 30 year-old engineer who brought his girlfriend here for the first time. Many of their friends prefer pop or rap, but Thien says he'll take the blues over a night at a club. "This music is emotional, and it has deep feeling." Listening to nhạc trữtình, Thien says, "you're like a foreigner: you come here, and through the music, you can learn about Hanoi and Vietnam."

Nguyen Van Loc says more and more young people are stopping by to listen, and he's grateful for the support. Especially since it's taken several tries and thousands of dollars to have his own cafe.

He's sure things would be much easier if he hadn't spent his best years in prison. And if he didn't have a record as an ex-con.

Sometimes, he cries when he talks about the last 45 years. Then, he sits up straight, smoothes his jacket and smiles, as he pulls a fresh cigarette from the box.

"It's not easy to have what I have today," Nguyễn explains, clicking his lighter. "But I'm trying to preserve this music. And to gain back my pride. So I don't care about the money. I just want to sing proudly.

Nguyen doesn't look like he's spending a lot of time chewing on what could have been. He's got to get back on stage.