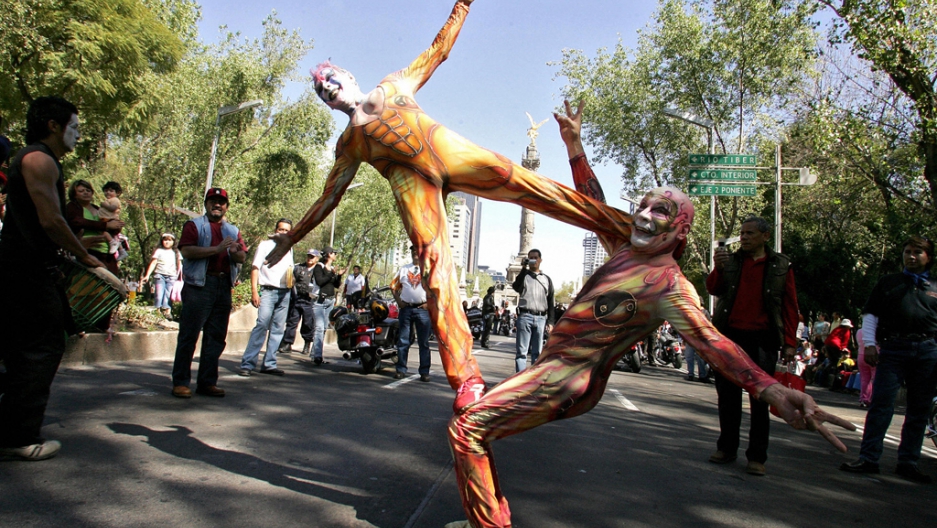 1. Gobbling late night, or rather very early morning, flame broiled tacos al pastor in one of the thousands of small stands sprinkled across the city

A taco stand in Mexico. (Rutlo/Flickr)

2. Driving one of the city's five million cars, unhindered by any but the most basic, and widely ignored, rules of a civilized road

3. Buying chewing gum, pirated movies, and just about anything else imaginable from vendors plying the packed tunnels and cars of the subway system

4. Drinking fine Mexican beer and an aged tequila or three with friends through an afternoon and into the night in a one of the hundreds of neighborhood cantinas

5. Joining the bicycle fests along the main thoroughfares that attract tens of thousands of riders every Sunday morning

6. Celebrating legalized gay marriage and other gifts of a politically progressive city government

7. Strolling the narrow and chaotic streets and the sprawling main plaza of downtown

Many of the oldest buildings were thrown up by the conquistadores using lava rock and other stones, torn from Aztec temples and palaces.

8. Oggling the naked protesters who arrive each spring to march along the central Paseo de la Reforma to demand God knows what

9. The chaos of hopelessly tangled traffic

It's quite often made far worse by any of the several thousand protests marches and street blockades that hit the city every year. But, hey, the chaos can be fun.

10. Cafe con leche and a steaming plate of chilaquiles — fried corn tortillas sauteed in spicy salsa and topped with an egg or chicken — in one of the ubiquitous Chinese cafes

11. Leaning back for a three-dollar, hot-towel and straight-razor shave in an oh so traditional barber shop

12. Slouching with hipsters in pulquerias, the once nearly extinct traditional and now rediscovered bars serving pulque, the viscuous and lightly fermented cactus juice that's provided a buzz here since long before the Spanish Conquest.

13. Spending long afternoons in any of the fine museums across the city

The Anthropology Museum itself requires a lifetime of dedication to take in.

16. The many thousands of small shrines to the Virgin of Guadalupe that pepper street corners, offices, shops and repair garages around the city.

17. Strolling mariachis and norteño bands and troubadours who fill bars, restaurants and streets with song

Tlaloc, the rain god of the Aztecs, lives.

19. The jugglers, acrobats, clowns and fire eaters that entertain motorists snared in traffic

20. Challenging lungs' resilience by breathing air filled with toxins, suspended particles and other goodies that once was estimated to be akin to smoking two packs of cigarettes a day

What doesn't kill you makes you stronger? Okay, this one isn't that fun.

When red poinsettias cloak the streets and parks, family and friends gather for parties lubricated with spiced and spiked punch, and children beat the hell out of treat-filled piñatas. Also, the streets become — for a short time at least — wonderfully quite.

23. Slipping out of town to one of the many acquifer fed spas that dot the countryside

24. The thick, hand patted corn tortillas, hot off the griddle, doused with salt and perhaps a bit of hot salsa

They still enjoy a huge following across the central Mexican highlands.

26. Sunday evening strolls through the Zona Rosa, the domain of Korean immigrants and gay clubs

27. Jacaranda season, February through April, when the blooming trees native to India blanket the city in regal purple