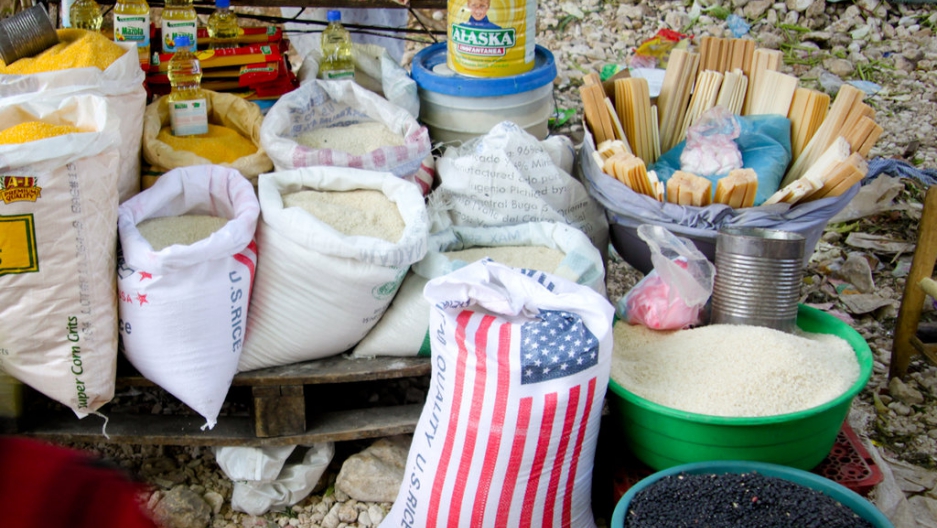 PORT-AU-PRINCE, Haiti — The idea that the delivery of American food aid needs an overhaul goes almost without question here in the capital of a nation still recovering from the devastating earthquake of four years ago.

Farmers in Haiti and many of their counterparts in the United States are joining foreign aid organizations calling on the United States to stop sending American crops to Haiti through what many critics say is the deeply flawed and wasteful strategy of the current, multi-billion-dollar US Department of Agriculture Food for Peace program.

"Unfortunately US policy doesn’t consider first the political interests of farmers abroad, but of its own,” said Camille Chalmers, director of a Haitian farmers’ association.

“But now there is a chance to change that,” he added.

A consensus has formed that something needs to be done to end the unintended consequence of food aid that actually ends up hurting some of the world’s most vulnerable people in developing nations like Haiti, where local farmers can’t compete against less expensive US crops.

The turning point in the debate over US food aid came when the US Agency for International Development (USAID)—the entity that oversees foreign aid—admitted the program is flawed, urging Congress to permit the agency to send cash rather than food to nations in need. Agency officials believe they could feed 2 to 4 million more people per year if they were allowed to spend more of their budget on procuring food aid locally in the countries where it is needed (another study put the figure of additional beneficiaries even higher, at 4 to 10 million people).

In Washington, the proposed reforms have been gaining support among legislators on both sides of the aisle: Democrats who defend US foreign aid spending and want to see the money stretch further, and Republicans concerned foremost with fiscal responsibility want to tighten up a wasteful program. Several libertarian-leaning think tanks including The Heritage Foundation, Cato Institute and Taxpayers for Common Sense support cash over food because it gives individuals in developing nations the ability choose for themselves what sorts of food to buy.

Even American farmers—who ostensibly have the most to lose if the program were to cease purchasing US crops—have come out in favor of the reforms, led by a letter from the president of the National Farmers Union.

President Barack Obama proposed an even more radical reform: removing food aid from the Farm Bill altogether, placing it instead in the international disaster assistance budget and two other funds so as to avoid the Title II restrictions entirely.

That’s because the US wasted $219 million over a three-year period through its food aid monetization program by which US crops are sent abroad on American-owned ships and sold to generate revenue for aid operations, according to a 2011 report by the US Government Accountability Office (GAO). Currently 15 percent of US food aid must be monetized in this way.

“Ocean transportation represents about a third of the cost to procure and ship commodities for monetization, and legal requirements to ship 75 percent of the commodities on US-flag vessels further increase costs,” according to the 2011 report.

American crops are so heavily subsidized that when they arrive in places like Haiti they sell at below-market cost, undercutting local farmers.

“Schools in the Artibonite (region of Haiti) give out American food. So a kid goes to school five days a week for 12 years and he eats something that his family could be growing themselves,” Chalmers said. “School is a model of what’s acceptable, so today the youth of Haiti are disconnected of the agricultural and culinary culture of their own country.”

According to the United Nations, 6.7 million Haitians—two thirds of the population—“struggle to meet their own food needs on a regular basis.”

And yet, a US House of Representatives heavily lobbied by the shipping industry rejected most of the proposed reforms in a June 2013 vote that left “the status quo in place, which means we will continue to spend more food aid dollars to reach fewer hungry people around the world,” wrote Timi Gerson, Director of Advocacy for the American Jewish World Service (AJWS), which has lead the push for reform along with Oxfam.

Instead of adopting the full reforms, the Senate passed a watered-down version that would allow just 20 percent of Food for Peace funding to be spent on local food procurement. Also in that bill is a measure that would increase funding to purchase food in-country (rather than buying it in the US) from $40 million to $60 million per year. The House version of the bill, however, would let that program expire. The House and Senate are expected to reach an agreement on the Farm Bill this month.

In Haiti, Chalmers said farmers are anxious to see if Congress will make any progress toward fixing a decades-old food aid policy so that Haitian farmers will see reduced competition form US food products.

“We have many people who are hungry. We have people who can only eat once a day,” Chalmers said. “It’s unjustifiable in a country with the capacity to feed itself.”

US one of the world’s only ‘food dumpers’

Since 1954 the United States has spent more than $100 billion on Title II food aid programs, nearly $1.5 billion of which went to Haiti including at least $200 million following the January 2010 earthquake. The US is the world’s largest food aid donor, giving about half of all global food aid, according to the GAO. But the US is virtually alone in the world when it comes to so-called ‘food dumping,’ or sending surplus or heavily subsidized food abroad en masse.

The New York Times reported in April that “The United States spends about $1.4 billion a year on food aid and is the only major donor country that continues to send food to humanitarian crisis spots, rather than buying food produced locally.”

In Haiti, Venezuela has outpaced the United States in funding the local procurement of food aid after Hurricane Sandy devastated Haitian crops and seed supplies in October 2012. According to the Associated Press, Venezuela’s “Aba Grangou” (Down with Hunger) program gave $30 million to 60,000 mothers to buy food for their children as well as to distribute seeds to farmers.

“Cash permits people to continue to buy food themselves, on their own and from their own people,” Chalmers said.

While Congress prepares to reject food aid reform this cycle, legislators are considering another bill designed to increase transparency in how the US government spends taxpayer money in Haiti specifically.

Last month the House passed a bill that would require the State Department to produce comprehensive reports on US assistance to Haiti post-earthquake, including a “description of the impact that agriculture and infrastructure programs are having on the food security, livelihoods, and land tenure security of smallholder farmers, particularly women.”

Advocates for food aid reform say independent reporting and evaluations of US aid are an important first step toward pinpointing the inefficiencies in such programs.

“Because it’s a bipartisan bill, it appeals to folks that approach this issue due to their interest in Haiti as well as those who are concerned about accountability to US taxpayers,” said Ian Schwab, who advocates on Haiti policy for AJWS.