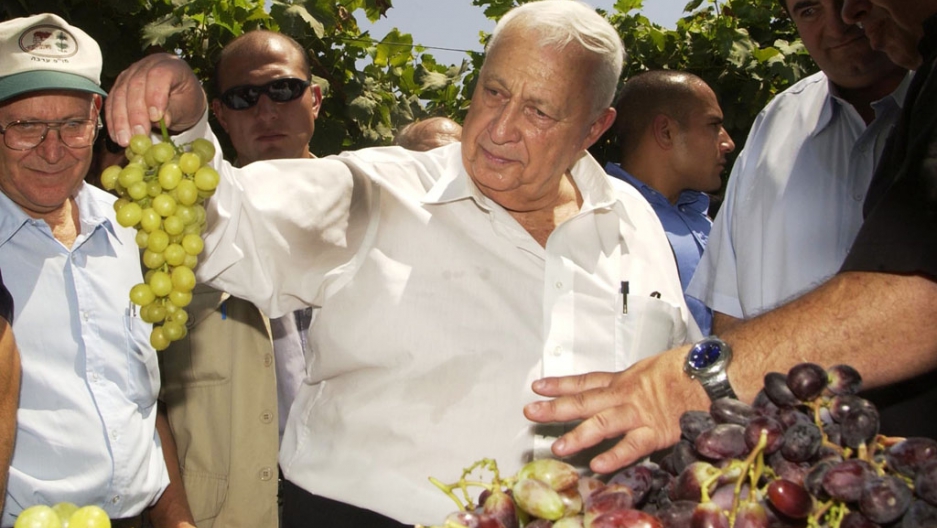 BEIT JALA, ISRAEL — In the controversial life of Israel's legendary Ariel Sharon, one fact is incontrovertible: he loved to eat.

Sharon was not an indiscriminate consumer, but rather a proto-foodie of sorts. His tastes ran to earthy Paleo-feasts involving glowing embers, heavily laden tables and premium, local fresh meat — preferably slaughtered by his own hands.

When stuck in Jerusalem, away from his beloved desert farm where he will be buried Monday, Sharon was known to crave the roast chicken produced in a small, cavernous restaurant tucked into a curve in a road in Beit Jala, a Christian town of 11,000 inhabitants located between Jerusalem and Bethlehem.

Sharon is well-remembered at Qabar by both regulars and employees, who have much to say about both Sharon’s appetite and his politics. During the early 2000s, the prime minister’s limousines were known to make regular pit stops at the restaurant. They would load up on takeaway for the ravenous head of state, who spurned the food available at his official residence.

Qabar is ubiquitously known as "Beit Jala Chicken," serving as it does one thing and one thing only —  roast, spachcocked chicken, charred on a modest outdoor grill, served with a set menu of sides: homemade hummus; tahini; chopped cucumber and tomato salad; chopped cucumber and tomato salad with tahini; spicy, meaty green olives; a glistening pond of green chili pickle; and its famous, inexplicably addictive garlic tapenade, an inscrutable cloudy mound of mild appearance whose flavor blossoms in the second bite, but never stings.

Hours have been spent trying to unlock the secrets of this condiment.

Sharon was said to devour the stuff.

"He would eat two chickens," confirms Qabar's owner, Nakhleh Qabar, 70, when approached on the night of Sharon's death.

Qabar, an attentive man with a steel-trap memory who prefers to be known as Abu Osama, has manned the grill without pause for 41 years, and is unfazed by inquisitive journalists ("so many people have written articles") adulatory heads of state, and, for that matter, moments of historical import. He is a member of the Greek Orthodox minority in largely Catholic Beit Jala, but the only sign of his faith is the restaurant's closure on Sundays.

Sharon is not the only leader who has enjoyed eating at his table: King Hussein of Jordan visited his previous restaurant, Everest, before 1967. Moshe Dayan, another iconic Israeli general and bon vivant, was in the habit of showing up "in two huge American cars, filled with girls." With considerably less ceremony, Avraham Katz-Oz, the gourmand minister of agriculture, would also drop by.

Sharon once arrived with a friend from a neighboring town, El Hader, and the two men argued loudly over the bill. Sharon eventually imposed his will and added the meal to his tab. Sharon loved fine food, but was not a big fan of formalities, and it is easy to imagine that Beit Jala chicken was a perfect fit: here, guests are expected to eat with their hands and are provided squares of grey paper for postprandial wiping. (The forks left by the piles of pita bread, which are perpetually ignored, are there only to facilitate shoveling humus.)

"God bless his soul," Qabar says quietly. "He came in here with 20 people once — but only he ate two chickens! He had a good appetite."

George Mukarker, a genial truck driver and a longtime regular who came by for some take away Saturday evening, recalled the night of the argument.

"I saw him here!" he exclaimed. "He sat here 25 years ago eating with some guy from El Hader, and finally fighting. Of course he won. He also ate more. He wasn't called Bulldozer for nothing!"

Not everyone in Beit Jala has pleasant memories of Sharon, of course.

Outside, by the grill, the faces of clients waiting in line clouded over when hearing Sharon's name.

Beit Jala lies almost exactly on the line between Israel (Jerusalem) and Palestine (Bethlehem). Its mainly Christian residents consider themselves Palestinian, but most have Israeli IDs, work in Israel and many speak Hebrew. During the Second Intifada during Sharon's term as prime minister, the town became known for the Palestinian militants who used its propitious geographical location to shoot at the adjacent Jerusalem neighborhood of Gilo, one of the quarters/settlements built immediately following the war of 1967 to protect Jerusalem from future invasion.

At the time, despite the intentions of the militants, residents of Beit Jala and Gilo who had never been particularly friendly were unified by the terror they faced daily. Since then, while Israelis do not rush Beit Jala chicken every Saturday with the abandon they felt before the uprising, emotions, like the violence, have waned.

By the till, Majed Rizik, an urbane Beit Jala native who works as clerk at the American consulate in Jerusalem, said that despite Sharon's final push for a diplomatic solution to the Israeli-Palestinian conflict, "he didn't go in the direction of peace. He had his own interests. He went in the direction good for his country and his people — and who can blame him?"

With that, Rizik picked up numerous tubs of garlic magic, some hummus, and headed out to get his chickens, all of which were destined for a party at home. "Remember, the Americans also pushed him," he threw over his shoulder.

With that, the focus returned to the food that had drawn both Sharon and his critics to this place. Abu Osama, who spent much of the evening behind his counter, surveying a steady stream of customers, was happy to discuss the particulars of his kitchen's delicacies.

What makes his chicken so good? "The chickens are from here, in Beit Jala." Does he use any special seasoning? "A little garlic."

And what about that crazy garlic paste, which seemingly no piece on either Sharon's unfettered but discriminating appetite, or Abu Osama’s bafflingly delicious roast chickens, may omit?

Here, in a GlobalPost exclusive, is the recipe:

Scrupulously peel enough cloves of garlic to half-fill your blender.

Top with an equally scrupulously peeled and boiled white potato.

Add the juice of one fat lemon.

Add to that enough olive oil to mostly cover the solid ingredients, and whip it as if you were making a mayonnaise, until it has become a snow-white emulsified mass with the texture of whipped cream.