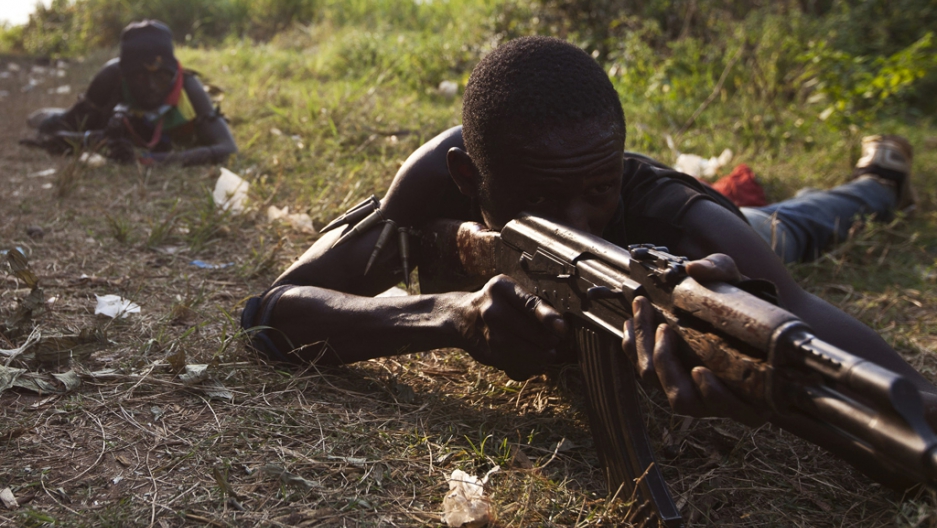 Anti-balaka militiamen, who were former members of the Central African Armed Forces (FACA), take part in a training session on the outskirts of Bangui on December 17, 2013.
Credit: AFP
Share

NAIROBI, Kenya — On Friday, the rebel-turned-president of the Central African Republic, Michel Djotodia, and his prime minister both resigned.

The move raises hopes that the country’s 10-month-long slide into anarchy might be halted.

The breakdown in CAR is one of the hottest hot spots in Africa right now.

Here's what you need to know about it:

Under the 10-year reign of Djotodia's predecessor, President Francoise Bozize, the Central African Republic, landlocked in the middle of the continent, earned its reputation as a “phantom state" — a structure that existed in little more than name, where corruption and misrule ensured the people remained mired in poverty despite an abundance of natural resources.

In March 2013, Bozize’s tenure ended as it had begun: with military force. The ousted president fled to Cameroon as rebels took over the capital.

From phantom state to failed state?

The Seleka rebel coalition was a marriage of convenience forged among the minority Muslims in the north of the country. It succeeded in forcing Bozize out, but its members shared little in common other than the desire for power. Then-rebel boss Michel Djotodia emerged as leader and sought to legitimize the coup by having himself declared interim president and then dissolving the rebellion, but many of his former comrades and fighters ignored his orders and instead split into armed factions.

Ex-Seleka forces went on the rampage, looting and killing with impunity and carrying out attacks on Christian communities. In response, Christian “anti-balaka” (meaning anti-machete) militias were set up to counter the Muslim ex-Seleka threat, pitching the country into an increasingly sectarian struggle, although it has not yet evolved into the genocide that some fear.

With the economy in tatters, fear and violence widespread, and the rule of law largely non-existent, a compelling case can be made for labeling CAR a failed state.

The African Union is sending 4,000 peacekeepers, but they have been slow to arrive, and are so far underfunded and largely ineffective. CAR’s former colonial power France — in an interventionist mood since successfully sending soldiers to counter a threatened Islamist takeover in Mali — pushed the UN to authorize the deployment of 1,600 French troops to bolster the African force which may, in time, be transformed into a full UN peacekeeping mission.

The European Union is also considering sending 1,000 soldiers to CAR. The foreign forces stand a good chance of pacifying the capital, Bangui, but most likely lack the numbers to re-establish law and order and disarm militias across the country.

Where’s the US in all this?

Ever since two Black Hawk helicopters went down in Mogadishu in 1993, America hasn’t been keen to put boots on the ground in Africa. Washington, however, has proved willing to pay for other country’s forces. In the case of CAR, the US has announced a $101-million support package for the French-backed African force that is trying to stop the killing, stabilize the country and contain its chaos.

Why does it matter?

The UN says that half of the country’s 4.6 million people are now in need of aid, while a million have been forced to flee their homes. Violence is brutal and routine — children have been press-ganged into militias and women raped.

It is a humanitarian catastrophe as well as a security threat in an unstable neighborhood: CAR border the two Sudans, both Congos, Cameroon and Chad. CAR is also thought to be the current hiding place of the fugitive leader of the Lord’s Resistance Army (LRA), Joseph Kony.

Finally, French officials have warned that Islamic terrorists from Nigeria’s Boko Haram and Al-Qaeda in the Islamic Maghreb (AQIM) could seek to take advantage of the chaos to build a safe haven in CAR.

Regional leaders at a summit in Chad forced Djotodia to step down on Friday. All 135 members of the CAR national assembly were flown to the talks since they have the legal power to force Djotodia out of office. Getting rid of Djotodia is a necessary step, but the power vacuum will have to be filled quickly to forestall CAR’s total collapse.