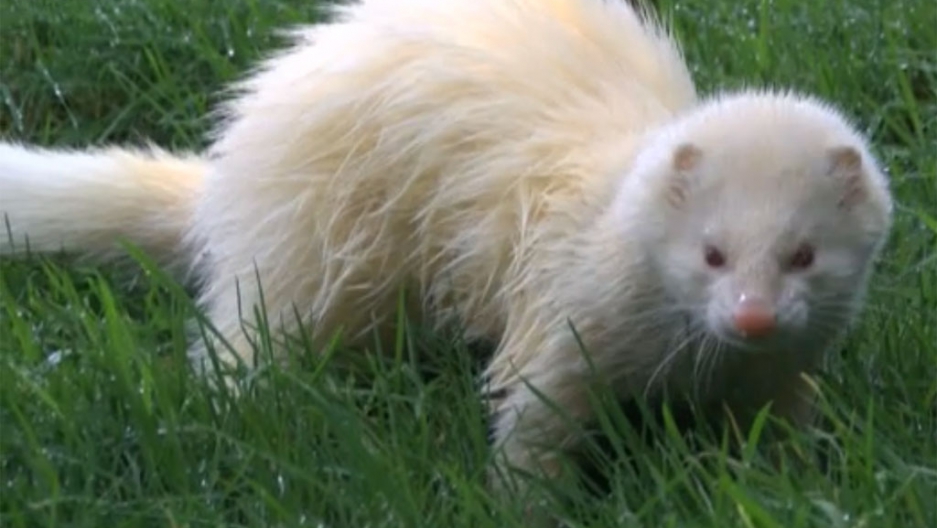 Grumpy Gareth the feisty ferret caught the attention of BBC on Jan. 10, 2014, reporting staff at Woodside animal sanctuary in Plymouth, England, are at a loss trying to adopt the wily weasel.
Credit: BBC
Share

We are worried for Gareth the ferret.

We're concerned he may never find his "forever" home, after the BBC brought his sad story to light, but also dubbed him “Grumpy Gareth.”

Unfortunately, Gareth has to go soon since he’s blocking the adoption of 11 other ferrets (who are unfailingly well-behaved, no doubt).

“It would have to be someone who has had ferrets in the past,” said Nicky Angwin, a supervisor at Woodside Sanctuary in Plymouth. “He is nippy, so they have to know how to handle a ferret correctly.”

See, that’s not a good start.

Should the tabloids latch on to that catchy nickname, the four-year-old “weasel” may never leave the English animal sanctuary he’s called home for the past nine months.

If there’s one thing we journalists know, it’s PR spin, and Grumpy Gareth has viral potential. Move over Grumpy Cat, there's a new ferret in town.

Paradoxically, while rescuers search for a new home for Gareth, there are owners across England searching for their stolen ferrets.

Yes, purloined polecats are a real issue for pet owners and professionals who use them for hunting rabbits and moles.

More from GlobalPost: Cheer up Grumpy Cat, you just landed another lucrative endorsement

Ferreter James Bradley told The Wall Street Journal he lost 27 ferrets to thieves last February alone. Theories abound as to why thieves are stealing the animals. Some suggest ferrets are being used by drug cartels or in dog fighting and badger-baiting rings.

"They leave everything of value and just take the ferrets," Bradley said of the thieves.

Sadly, nobody has tried to steal Gareth. After all, who is going to want a grumpy ferret that bites? He might never shake that reputation, regardless of his endorsement potential.

Surely, he can’t be that bad?

“He came into the sanctuary because he was too destructive to be an indoor ferret,” the sanctuary's website reads. “He needs an outdoor activity centre with lots to do and play with and will need to be the only ferret. Gareth will be suited as a fun house ferret rather then a cuddly pet. He can be temperamental, so isn't always friendly.”

Well, here’s another lesson in good spin-doctoring for those at Woodside: When trying to put capricious canines, finicky felines, rambunctious rodents or even unruly ungulates up for adoption, you might want to soften their images first.

“You would think he would like to spend his waking hours socializing,” Angwin added.

“But he is his own worst enemy.”

Right, we give up. You’re on your own Gareth.