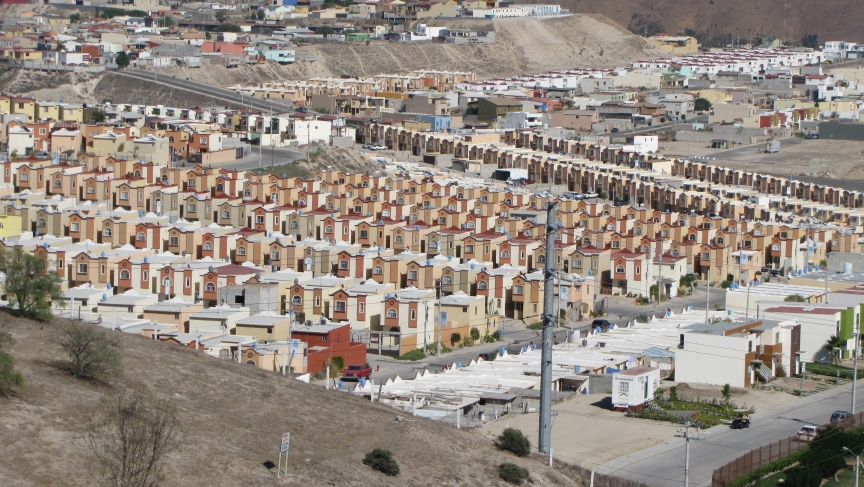 Planned housing developments continue to be built on the outskirts of Tijuana. Mexican authorities say they want to promote infill development and sustainable housing.

If you visit Tijuana in Mexico, you'd be unlikely to stumble upon a suburb like Villa del Prado. You would only get there by heading southeast of the city's urban core, through miles of sparsely populated hills, junkyards and humble ranches.

If you got there, you would find a small city, filled with row upon row of identical, one- and two-story units — 14,000 of them.

In the past few decades, millions of Mexicans became homeowners thanks to higher salaries and government aid. The increased demand fuelled a boom of low-cost suburbs around Tijuana and other cities.

Locals call the houses in this type of suburb pichoneras, or birdcages, because they’re so small. Some are only 300 square feet. Yet people bought into the idea of having their own home — even if it’s a tiny one — in a manicured neighborhood.

Ruth Betancourt moved to Tijuana eight years ago with her husband and infant daughter, and they bought a house in Villa del Prado.

“When we first got here, it was quiet,” Betancourt says. “There weren’t many people. Most of the houses weren’t occupied yet. It was a nice place; that’s why we picked it.”

At the time, those new, empty houses signalled hope: a fresh start in a brand new suburb on the edge of a bustling metropolis.

This type of planned development sprang up on the outskirts of Mexican cities starting in the 1990s. In Tijuana, there are about 15 of them. They're modelled on the American suburb, says Larry Herzog, a professor of city planning at San Diego State University.

“It’s often built because of fear of crime. People often want to get away from the city. They want to move somewhere where they feel safer,” Herzog says.

These suburbs were largely fuelled by a Mexican government agency called Infonavit, which finances mortgages for Mexican workers. Infonavit aimed to move beyond the shoddy building and erratic urban expansion that had plagued cities like Tijuana.

Over the years, Villa del Prado filled up. Some residents opened restaurants, stores and Internet cafes on the ground floor of their homes. A street market sprang up.

But recently, the neighborhood has begun to deteriorate. There are abandoned and vandalized homes on nearly every street. The cul-de-sac where Betancourt lives has four abandoned homes — some with missing front doors and windows. One house is filled with trash; another has walls covered in graffiti.

“People get high in these abandoned houses. They sleep in them and keep tabs on the neighbors’ comings and goings, so they can break into their homes and rob them,” says Betancourt.

The neighborhood built on a dream of safety is now crime-ridden.

And Villa del Prado isn’t alone. There are an estimated 50,000 abandoned homes in Tijuana; across Mexico, there are 600,000.

Here's what happened in Villa del Prado and some of the other low-income suburbs. Like in the US, many people lost their jobs when the global economy tanked, and they could no longer pay their mortgages.

But beyond that, some of the developments were built in the middle of nowhere. Planners expected the city to grow up around the neighborhoods, but often that didn't happen. And now the developments feel isolated.

“Other investors aren't coming in and building shopping centers,” says Herzog. “There are no clinics nearby, so people are very isolated.”

“Armed robbers broke into a house across the street. The pregnant woman who lived there was so scared that she miscarried,” Betancourt says. After that, the family moved to a safer neighbourhood.

Housing authorities are aware of all of these problems. They concede that they’ve made mistakes with the suburban model, and now they’re trying to correct them.

“Our new goal is quality of life for the homeowners it serves, and quality surroundings,” says Alejandro Arregui, who represents the mortgage agency, Infonavit, in Baja California.

He says the Mexican government is now focused on sustainable housing, that's close to where people work, shop and play.

In neighborhoods like Villa del Prado, Arregui's agency is working with private companies and foundations to fix up homes and resell them.

One firm has already restored and resold more than 600 homes throughout Tijuana.

If the city wants to restore all of its abandoned homes, it's got about 49,400 to go.