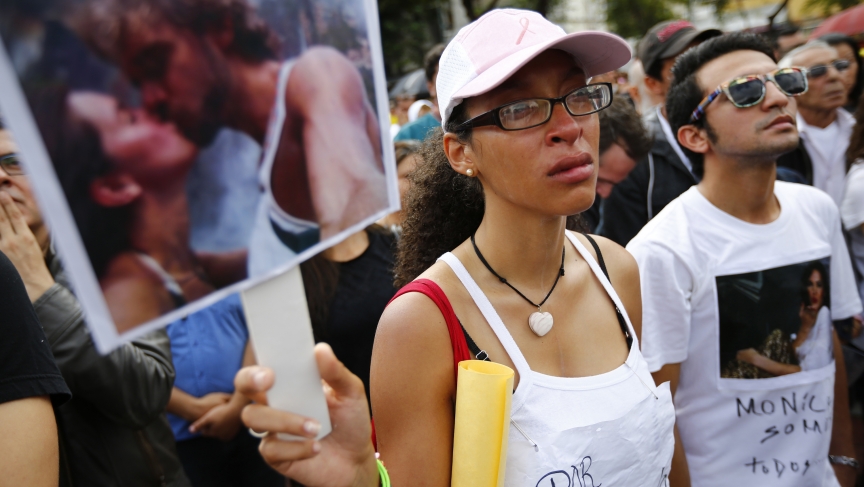 A fan of former Miss Venezuela Monica Spear reacts while taking part in a demonstration against violence in Caracas, January 8, 2014. Gunmen shot dead Spear and her ex-husband in the latest high profile case of violent crime in the South American nation.

Venezuelan beauty queen and actress Monica Spear spent her life in the spotlight.

But her murder this week has put the spotlight on Venezuela's skyrocketing violent crime rate. Spear and her former husband were killed during a robbery, while driving on a quiet stretch of highway outside of Caracas.

"Something unexpected happened after the shock of the murder of this couple," said the BBC's Vladimir Hernandez. "The political and opposition leaders in Venezuela have been brought together — trying to agree on security policies to avoid cases like these from happening."

Maduro called the killing of Spear "a slap in the face,'' but he did not propose any structural changes to law enforcement, despite the country's high crime rate.

"In some areas, for instance, people when they are driving at night, they would just jump the lights," Hernandez said, "they wouldn't stop because they are afraid they may be carjacked, they may be kidnapped, they may become targets for criminals ... In Caracas, carpooling is more about safety because of fear of traveling alone."

Police said Spear and her companion tried to protect themselves from the armed gunmen by locking themselves inside their car, which had been disabled by tire punctures. But the attackers fired into the car.

The crime problem has a number of underlying causes, which include easy access to illegal weapons, a corrupt and overstretched judicial system and violent, overcrowded prisons. And there is a high level of distrust of law enforcement officers.

"There are many cases of criminal violence where police officers, sadly, have been involved," Hernandez said.