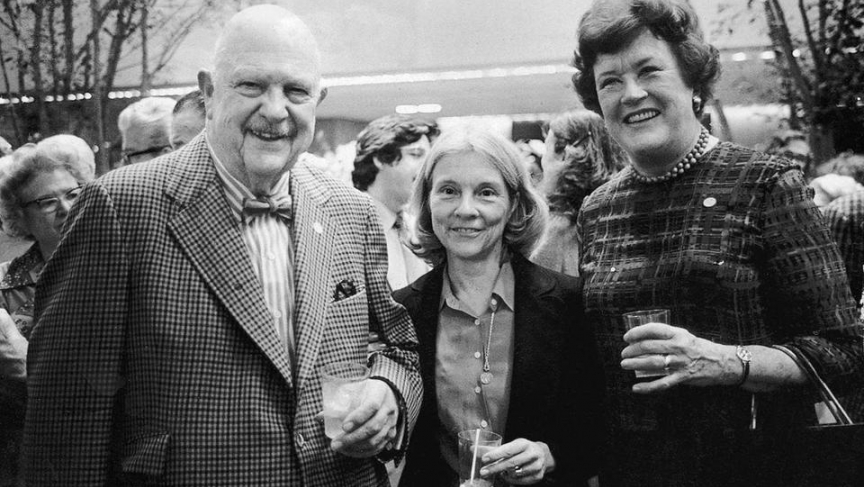 From "The Tenth Muse: My Life in Food" by Judith Jones

In the late fall of 1970, three American food legends — James Beard, Julia Child and M.F.K. Fisher — found themselves in Provence, France. And that, says Luke Barr, a grandnephew of Fisher, changed the way Americans eat to this day.

Barr just published a book about that meeting, "Provence, 1970." He says until 1970, good cooking in the US mainly meant French cooking. And that's because of Child, Fisher and Beard who, as Americans, had visited France in the '30s and '40s and discovered wonderful food, even as simple as crusted-bread and butter, that they couldn't find in America and then brought it back.

The three had deep attachment to France and Europe, and they taught Americans how to cook — especially Julia Child, whose television show was widely popular.

But by 1970, the '60s had happened, the civil rights movement had happened — all kinds of political turmoil had happened — and US culture was changing, as well. People were no longer interested in French cooking. Instead, they were talking about Indian food and wanting to cook Chinese food.

Then, when the three foodies met in Provence in 1970, they ended up sharing their ideas on food, from taste to style of cooking and authenticity. But it wasn't really a planned trip.

Barr says that Child and her husband decided to go for a vacation to their house in Provence, France, to celebrate her second volume of "Mastering the Art of French Cooking," which was a huge bestseller. Barr's great-aunt, Fisher, had a long-planned trip to France with Barr's grandmother and agreed to meet Child in Provence.

Beard was attending a diet clinic in nearby Grasse. He was very overweight and struggling to lose the excess.

"So it was really a coincidence that they all found themselves there in the late fall/winter of 1970, together," Barr says.

Their meetings and conversations proved to be crucial in defining America's culinary future. They sorted through their thinking and that helped them pave their separate ways away from what had become the rigid and snobbish rule of French cooking into today's broad, all-inclusive food culture.

Julia Child visits a cremerie while on location in Provence, France for The French Chef. (1970/WGBH Media Library & Archives)