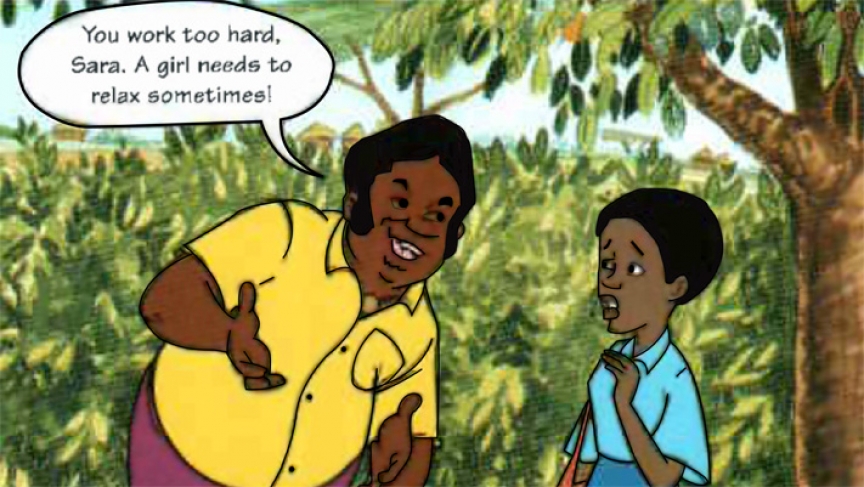 An image from an animated film called "Sara: The Trap," produced by UNICEF and designed to teach young girls in Africa about sexual exploitation by older men, or "sugar daddies."

Sima (not her real name) lives in a small, dilapidated house in a sprawling township on the outskirts of Cape Town, South Africa. Most nights, she and her siblings go to bed hungry.

“We don’t have food at home,” she said. “We just drink water and go to sleep.”

Her mother works part-time as a cleaner. Her father is unemployed. Her parents fight all the time.

“I wish I could just go away — not be with them while they are fighting,” she said.

A few months ago, while visiting her older sister who lives a few blocks away, Sima was washing clothes near the road. A man approached her. She thought he looked stylish and interesting.

She gave the man her phone number. He called her that night. The next thing Sima knew, they were dating.

Sima didn’t know the man’s age, but she guessed he was in his mid-twenties. Sima is sixteen.

Students warned of the risks

According to health experts, sexual relations between older men and younger women have been a significant driver of the AIDS epidemic in Africa. These relationships, common in many areas, have enabled HIV to move quickly from one generation to the next.

In fact, studies have shown that the rate of HIV among school-aged girls in South Africa is nearly three times higher than among school-aged boys. The reason for the gap, South Africa’s minister of health said last year, is "sugar daddies" — older men who have sex with much younger women.

Like many schools in Africa, the Centre of Science and Technology (COSAT) — a public high school near Cape Town — cautions girls about these relationships. In a recent class at COSAT, students discussed the dangers.

“You don’t expect to be the only one in [a relationship with] that sugar daddy,” said Sihle, a junior. “There can be, like, five of you [with] that same guy.”

But while some girls focused on the risks of dating older men, others spoke about the benefits.

“Sometimes it’s nice to have a sugar daddy, because you live a fancy life, you wear posh clothes, and people will notice you,” said Zethu, a junior.

When the class ended, I spoke with the teacher, Zoe Bikwana. She said she often has a hard time convincing girls to end relationships with older men.

“It really gets difficult to get through to young people, to stop [dating older men],” she said.

After years of counseling students, Ms. Bikwana has come to a rather chilling realization — that most girls know what they’re getting themselves into.

“They do see the risks,” she said. “But they’re prepared to take them.”

Sima, the sixteen-year-old who recently got involved with an older man, is a case in point. She was a junior at COSAT and she had been warned of the risks. Yet she started spending a lot of time with the man.

Sima could tell that some people judged her harshly. They would stare at her and make snide remarks.

“Sometimes you just wish you could put the person who is judging you into your shoes [to] feel how hard your shoes are,” Sima said.

After all, she said, the older man was giving her love and support — unlike her father. For her, the relationship meant food, clothes, and a comfortable place to stay.

But the relationship interfered with other aspects of her life. Sima began missing school. It was then that Ms. Bikwana, the teacher from COSAT, stepped in. She arranged to give Sima some money, thinking that might pull her out of the relationship.

“She got support from school, she was given groceries at some point,” Ms. Bikwana said.

But it didn’t work. Sima stopped showing up for classes altogether. Eventually, she was expelled.

Ms. Bikwana said she felt like she had done everything she could. “[It] really saddens me as an educator, because I feel that I cannot do anything,” she said.

Meanwhile, Sima said she had fallen in love with the man. She felt she was finally enjoying life. But then, the man called her and delivered some unexpected news. He was moving.

“He told me that, the next day, he is going to Pretoria, and he has the tickets and everything,” Sima said. “I was so shocked.”

“I asked, ‘How could you do that? Are you just now leaving me just like that? Just going away and leaving me with all the loneliness?’” she said.

The man didn’t say much. He was sorry. He would call her.

Sima was devastated. She had to move in with her parents again.

“It’s back to that normal life, that old life, and I don’t want to go back there,” she said.

Sima is now trying to pull her life back together. She is hoping to re-enroll in school this year. She thinks she should probably avoid relationships for a while.

But she said, honestly, if she is approached by an older man again, she is not sure what she’ll do.