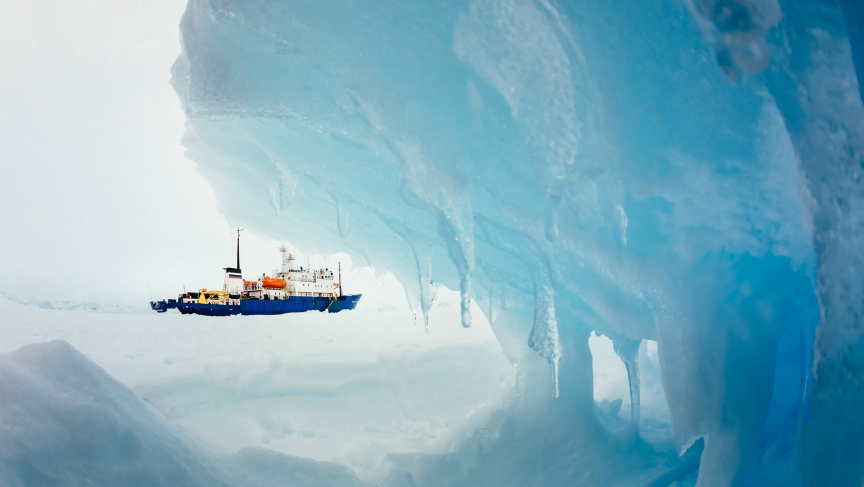 The MV Akademik Shokalskiy is pictured stranded in ice in Antarctica, December 29, 2013.

Fifty-two scientists, tourists and journalists spent Christmas and New Year's stranded by thick ice on the Russian ship Akademik Shokalskiy in Antarctica's Commonwealth Bay. While stuck, the journalists reported about their onboard celebrations of the holidays.

Their dramatic rescue, last Thursday — using a helicopter from the Chinese icebreaker Xue Long to ferry them to the ship Aurora Australis — made international news.

But since the rescue, some polar scientists have been asking questions about the "Spirit of Mawson" expedition, which was named in honor of a trip a century earlier by Antarctic explorer Douglas Mawson.

"They are not upset that a rescue effort had to be made and that ships were moved," said New York Times Dot Earth blogger Andy Revkin. "They're upset that the basic need for it was an expedition that they see as kind of frivolous."

The US Coast Guard's Polar Star icebreaker was sent to free the Chinese icebreaker, which sent the helicopter that rescued the passengers from the the stranded vessel.

"The Polar Star is supposed to be clearing ice in McMurdo - the big American/international Antarctic base," said Revkin. "It's not [at McMurdo] because of the operation [to rescue] Spirit of Mawson."

The rescue mission involved significant cost and risk — and it affected other science programs.

"I think the 'grump' factor is that this operation seemed to take place in Commonwealth Bay, where there was an unusual amount of sea ice," said Revkin. "It was not unexpected that you could have this kind of event transpire."

Some scientists were also frustrated by what seemed to be the carefree attitude of those on the trapped ship. The passengers participated in a New Year’s Eve singalong that was posted on YouTube.

"There are graduate students for whom this is a once-in-a-lifetime opportunity," said Revkin. "There is certainly educational value. But the question is, was it worth taking the risk ... into a bay [that] any satellite image could show you was surrounded by sea ice that could move."

Chris Turney, the leader of the Spirit of Mawson (or Australasian Antarctic) expedition, rebuked his critics in an article in London's Observer newspaper.