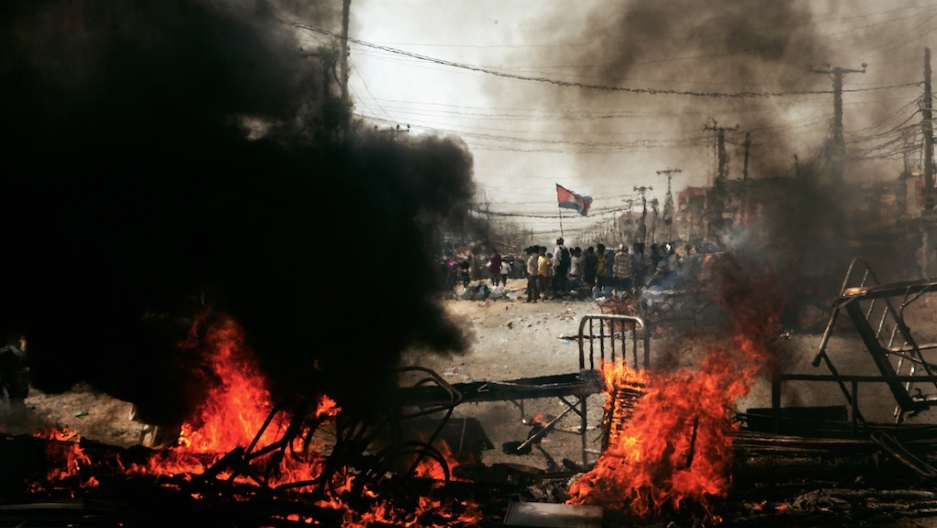 Protesters await police behind a burning barricade on January 3, 2014 in Phnom Penh, Cambodia. Dozens have been injured, and at least five people have reported dead after police broke up demonstrations by garment workers demanding wage increases. South Korea is now boasting a behind-the-scenes role in the crackdown.
Credit: Omar Havana
Share

Editor’s note: This story was originally published on Jan. 7, 2014. Please scroll to the end of this article for a response that South Korea’s Ministry of Foreign Affairs sent GlobalPost on Jan. 9. 2014. GlobalPost stands by the piece in its entirety.

There is truth to this, but it's rare to uncover on-the-ground examples of how this string-pulling works.

Cambodia's current conflict over garment wages provides one such example, GlobalPost has learned.

In recent months, the impoverished Southeast Asian country has been enmeshed in a series of strikes involving garment workers who stitch clothes for Western brands. Workers are demanding a doubling of the minimum wage, saying they can’t live on their current $80 monthly income.

Although the garments are destined for the US, Europe and Japan, South Korean companies reap much of the financial gain, playing the role of middleman between laborers and Western brands. Korean-owned factories employ legions of low-wage workers, churning out clothing for fashion-hungry markets. In 2012, Seoul was the largest investor in the country with $287 million in projects, beating out its behemoth of a neighbor, China.

Now, South Korea has emerged as a behind-the-scenes actor in the crackdown. The embassy admits that in recent weeks it has been running a backdoor campaign to protect Korean business interests. This campaign has included turning to the brutal and battle-hardened Cambodian military to implement security measures.

Seoul and Phnom Penh maintain a brotherly bond that goes beyond money. South Korea’s previous president was also an economic adviser to the Cambodian prime minister. Korea was the first democracy to congratulate the ruling party on a July 2013 election win that human rights groups say was loaded with irregularities — and that sparked the wave of labor and political demonstrations that ended late last week.

In other words, there are "national" interests at stake. Those interests have apparently translated into protection for Korean companies — particularly as protesters stepped up their game, launching raucous assaults on factories.

On Thursday, an elite paratrooper unit showed up at a protest armed with batons and steel pipes, beating a dozen monks and demonstrators in front of a factory run by Yakjin, a joint Korean and American corporation that supplies garments to Gap, Old Navy, American Eagle and Walmart.

On Friday, the repression took a darker turn. Hundreds of battlefield troops, including some from the prime minister’s personal bodyguard brigade, shot and killed five demonstrators in another area of Phnom Penh, the Canadia Industrial Park.

Sound terrible? Not everybody thinks so.

In a long-winded statement in Korean on Monday, the South Korean embassy took credit for convincing the Cambodian government to “understand the seriousness of this situation and act swiftly.” It cited high-level lobbying over the past two weeks as contributing to the “success” of protecting business interests.

The embassy boasted that Korean factories at the Canadia Industrial Park, where the Friday killings took place, were handed a special favor as a result of diplomats’ efforts. Their buildings were the only ones to get special protection from soldiers, the statement claimed. Seeking resolution to the strikes, Korean officials pushed their case to dignitaries who don’t exactly put labor strikes in their portfolio: the powerful head of Cambodia’s Counter-Terrorism Unit, who reports directly to the prime minister, and other top military officials.

“As a practical measure, military forces and police have been cooperating closely with us to protect Korean companies since we visited the capital defense command headquarters with Korean businessmen to tell them about the situation, and as a result, to prevent any arson attempt or looting, military forces are directly guarding only Korean companies among many factories in the Canadia complex,” read the statement, discretely posted on an official Facebook page that is not widely viewed (see screenshot at the bottom of this article).

Another statement added that, since December 27, Korean officials have appealed in a letter to Prime Minister Hun Sen, the country’s strongman for nearly three decades. Unable to meet directly with the dictator, the embassy held talks with members of his cabal: Om Yienteng, chairman of the government’s human rights committee, Ouch Boritth, one of many “secretaries of state” in the Ministry of Foreign Affairs, and at least four other top officials.

Not everyone agrees with the embassy’s version of events. Yakjin, the garment maker,insists that military police arrived in the spur of the moment owing to protest violence on Thursday. The clear-out, the company says, wasn’t planned. “People, and not just the labor union, gathered and tried to literally push into the factory,” said Kong Sokunthea, an administrative officer at the center. “There is a military unit behind the factory, and a worker [inside the factory] knew a soldier, so we asked the military to step up.”

“The military came in front of the factory door and tried to convince the workers to return, but they declined, so the military got a few people. The government’s order was also the reason why the military was able to subjugate the strike in such a fierce manner,” she said.

She denied that Yakjin had been in cahoots with the Korean government, and was unaware of any Korean meetings with the military.

A representative from Yakjin’s head office in Seoul hung up on GlobalPost when asked about possible government involvement.

Government officials and industry representatives interviewed by GlobalPost, too, could not confirm that any discussions took place between Korean and Cambodian officials. “I don’t know about any meeting between the higher-ups, but there could be a request or suggestion from the businessmen as it is the economic zone…they must have requested we help maintain security and protect their interests and properties,” said Kheng Tito, a spokesman for the military police.

Even if there was Korea-Cambodia engagement, “I don't think private sector had any authority to order the military to take action,” said Ken Loo, secretary general of the Garment Manufacturers Association of Cambodia (GMAC), a membership body of garment companies.

On Tuesday, GMAC dismissed the five deaths as “collateral damage.” The group complained that weeks of labor unrest will cost the industry $200 million, the Cambodia Daily reported.

Among Cambodian soldiers at the scene of a demonstration, GlobalPost also identified an individual bearing a South Korean flag emblem on his army fatigues. The individual, who has not been identified, was captured in a video of the demonstration aftermath posted on Facebook on Thursday (he appears at the one-minute mark; screenshot below). His identity could not be verified.

Government officials denied the individual had any connection to the Cambodian or Korean militaries. “He could be the company’s security guard,” said Kheng, although he appears to be wearing a military uniform. Phay Siphan, a spokesman for the Council of Ministers, told GlobalPost: “The Cambodian military unit does not have Korean flag bearers. What you saw could be a private individual and not a unit from Korea.”

But others weren’t so certain. Over the past decade, the South Korean military has dispatched a handful of retired officers to advise the Royal Cambodian Armed Forces, said one Korean scholar of Cambodia who asked not to be named.

And South Korea is a known patron of the prime minister’s bodyguard unit, Brigade 70, despite reports of human rights abuses — including the shooting last week.

In 2011, for instance, Seoul helped fund a $28 million tank storage facility run by the brigade. But human rights groups accuse the unit of numerous abuses, including a 1997 grenade attack at an opposition rally that wounded an American aid worker and invited an FBI investigation.

Screen shot of statement posted by the Korean Embassy on the Cambodian garment strike crackdown. (Update: the statement has since been removed.)

Editor's note: Below is the full text of a response that GlobalPost received on Jan 9, 2014 from South Korea's Ministry of Foreign Affairs:

Dear Editor and Mr. Geoffrey Cain of The Global Post,

The Ministry of Foreign Affairs of the Republic of Korea (ROK) would like to exercise the right of reply in connection with The Global Post’s online article titled “South Korea pulled strings as Cambodia’s military cracked down on protesters” (January 7, 2014, 11:16). Accordingly, I would like to request The Global Post to publish the ROK Foreign Ministry’s position as below.

1. After the Cambodian government announced its minimum wage on December 24, 2013, the Embassy of the Republic of Korea in Cambodia received requests from local Korean garment producers, whose safety was threatened by demonstrations, that they be provided with protection.

° In response, since December 26, the ROK Embassy has continuously requested for the Cambodian government’s cooperation in protecting Korean residents and companies in the country.

° It is the responsibility of the ROK government to protect its nationals overseas and therefore request the host countries to protect their safety when necessary.

° The embassies of other countries in Cambodia, such as China and Japan whose companies are operating in the country as well, are said to have made similar requests to the Cambodian government.

2. On January 4, the day after the firing on protesters, the ROK Embassy, concerned over the safety of Korean companies and nationals in the Canadia Industrial Park, together with the head of the Korean fabric manufacturers’ group in Cambodia met with local military authorities in charge of the Industrial Park area, toured it and requested that guard for the Korean companies and nationals be enhanced.

° Six Korean companies operate in the Canadia Industrial Park where the firing occurred.

3. As can be seen from above, the ROK Embassy, in the early stages of protests, requested that the Korean companies and nationals be protected. As demonstrations led to bloodshed, posing a greater threat to the safety of the Korean nationals and companies, the Embassy requested that guard for them be enhanced.

° In this sense, some parts in The Global Post report - for example, “South Korea pulled strings as Cambodia’s military cracked down on protesters”; “South Korea urged Cambodian forces to protect corporate interests”; “South Korea has emerged as a behind-the-scenes actor in the crackdown”; “The embassy admits that in recent weeks it has been running a backdoor campaign to protect Korean business interests” - are incorrect and misleading.

4. With regard to the crackdown by Cambodia’s elite paratrooper unit in front of Yakjin on January 2, the ROK Embassy and Yakjin had nothing to do with the crackdown at all.

° According to Yakjin, the company had never requested involvement of that military unit.

° Additionally, a certain media reported that according to the ROK Embassy, Yakjin got the unit mobilized through personal connections. However, such report is by no means true.

° The ROK side knows nothing about the individual with a South Korean flag emblem on his army fatigues captured in a video of the demonstration.

° The ROK government has never provided army fatigues to Cambodia.