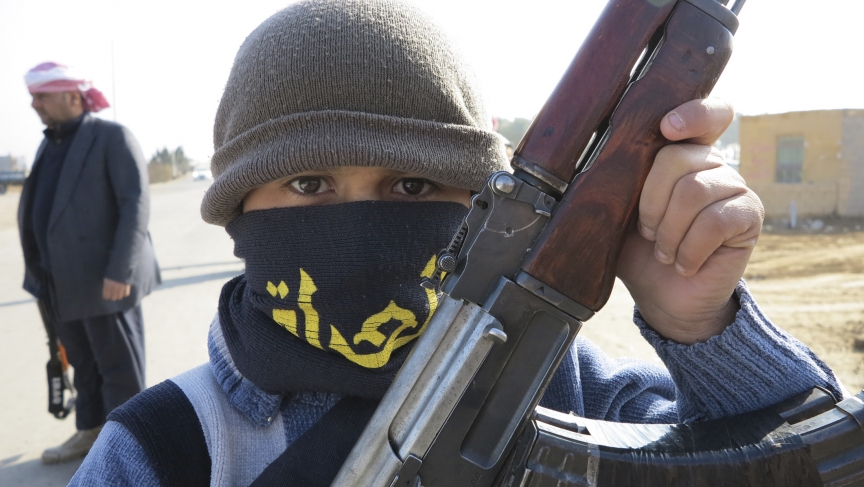 A boy holds up his Kalashnikov rifle on the streets of Ramadi, Monday. He's part of a tribal militia being raised to take part in the fighting between the Iraqi government and al-Qaeda linked militants. His militia appears to be on the government's side at the moment.

The headlines out of Iraq at the moment sound eerily familiar to Americans: An assault on Fallujah is delayed because of fears about civilian casualties.

Fallujah saw fierce battles between US forces and insurgents during operation ‘Iraqi Freedom’ and the battle for Fallujah in 2004.

The difference is that, now, US troops aren't involved with the fighting. The headlines describe the current battle raging in Iraq's western Anbar province between the Shiite-dominated Iraqi government and insurgents in the majority Sunni region.

The BBC's Rafid Jabouri in Baghdad says the fighting stems from a long-running power struggle between Iraq's Shiite and Sunni politicians. While Iraq's government is based on a power-sharing agreement, the Sunnis complain that they don’t have any say when it comes to security issues and that the military has an anti-Sunni bias.

In Fallujah, most of the residents are Sunni Arabs, and many oppose the government of Prime Minister Nouri al-Maliki (a Shiite). “However, many Sunnis were also scared to see al-Qaeda militants take control of two major cities in their province last week. That’s when key tribal leaders decided to fight al-Qaeda instead of the Iraqi government,” he says.

Al-Maliki has appealed to the residents of Fallujah to drive out al-Qaeda-linked militants, says Jabouri. And many expect Iraq's military will attack the al-Qaeda group in Fallujah soon.

Pete Mansoor is watching the latest unrest in Fallujah closely.

Mansoor is a soldier. And not just any soldier. He helped shape the counter-insurgency strategy that turned the Iraq war around for the US.

Mansoor was founding director of the US Army/Marine Corps Counterinsurgency Center at Fort Leavenworth, and went on to put his theories to the test as executive officer to General David Petraeus during the surge in 2007. He has a new book called "Surge: My Journey With General David Petraeus and the Remaking of the Iraq War."

"It's very disappointing," he says, referring to the recent fighting in Iraq. "To someone who spent 28 months of his life in Iraq, watched a couple of dozen of my soldiers die, and all the blood and treasure expended, it's deeply, deeply disappointing that al-Anbar and other portions of Iraq have spiralled downward the way they have in recent months."

Mansoor blames the sectarian policies of al-Maliki for alienating the Sunni population of Iraq. But he also criticizes the Obama administration for disengaging from Iraq so completely, and failing to rein in al-Maliki.

Still, he rejects the idea that American sacrifices in Anbar were in vain, "because I'm not sure that al-Qaeda is going to succeed in what they're doing right now." Mansoor says America should get re-engaged with Iraq, but not send troops back. "I think at this point, that's water under the bridge. This is a no go-back game. It's not like Monopoly where you can return to go and collect $200 and move on. At this point, we're going to have to do the best we can without US forces on the ground."

Mansoor also criticizes Prime Minister Maliki for the way he is handling the troubles.

"They've turned away some of the tribes that were such a significant part of the turnaround in Anbar in 2006 and 2007 and beyond. The Abu Risha clan, for instance — the initial tribe that allied with US forces in Ramadi — it's been sidelined by the government. I think this is the wrong way to go about it. These are people he's going to need on his side" if he's going to get al-Qaeda out of Anbar province again, he adds.

Mansoor acknowledges that the government has won the support of the biggest tribe in Anbar — the Dulaimi confederation. "It's certainly important. But, again, you want all of them on your side, if you can. It doesn't make any sense to alienate any of them, if you can help it."

He says it's relatively simple for outsiders to identify key players and influence them. "General Petraeus used to like to say that Iraqi tribes are like re-runs of the Sopranos. They all have a trucking company, a construction company and an import/export business. You win support by giving them things, and by making deals. It's business to them."

The US gave them contracts and jobs and training. "In return, they gave us intelligence and offered security services in their neighborhoods," Mansoor says. "It's just common business dealings. It just happens the business includes war-fighting."

Looking ahead, Mansoor says the US must work with al-Maliki, despite his shortcomings, and try to moderate his sectarian political behavior.