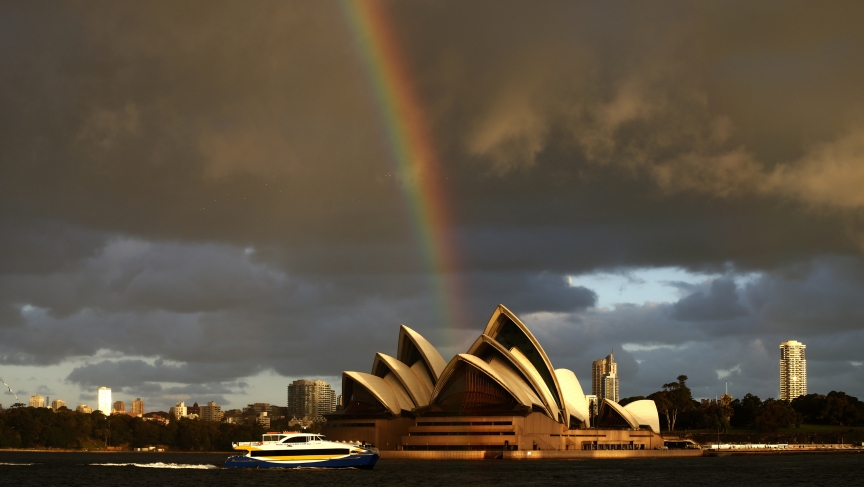 A passenger ferry navigates past the Sydney Opera House on a sunny afternoon in central Sydney in July. Australia is suffering a record heat wave now in January — during its summer.

As much of America shivers — or prepares to shiver when the ominously termed polar vortex moves east on Tuesday — our English-speaking cousins in Australia are drooping under a nasty heatwave.

In fact, the Courier Mail in Australia reports that it's been so hot that bats are literally dropping like flies. Tens of thousands of bats died in 10 different colonies around the country.

At least 34 locations around Australia, in recent days, have hit records for their hottest days ever. Some locations reported temperatures as high as 121 degrees Fahrenheit.

Quagmire du jour: What should the US do with South Sudan?

South Sudan is the world’s newest state — and now one of the most dangerous. In the last month, the fledgling African country has degenerated into a civil war between different ethnic groups. All of which begs the question is it time for the US to intervene?

The Atlantic’s G. Pascal Zachary argues that we should turn to the pages of history to find a way forward for South Sudan — indeed, for any new country that seeks to form: trusteeship. Zachary says in exchange for constraints on sovereignty today, they'd get a more stable democratic future.

Ten years ago, Islamist extremists came near to holding the Iraqi city of Fallujah, and were only dislodged by a brutal US military offensive. Today, Fallujah is in the hands of al-Qaeda affiliates.

Iraq's prime minister has called on local residents to "expel" the extremists, but so far, al-Qaeda remains in control. Writing for the Huffington Post, Al Eisele, editor-at-large of The Hill, argues that as goes Fallujah, so goes Iraq. It was the case in 2003, when the US military dislodged extremists, and it is likely still true today. The current situation in Iraq doesn't bode well for democracy — or even security. And not just in Iraq.

Next time you sip a glass of wine, think of your nose

Many of us have enjoyed a good wine or two. And odds are, we've probably had some lousy ones, too. But what makes the difference between the two is actually quite small. About 99.9 percent of wine is identical from bottle to bottle, glass to glass. The differences develop in the final .1 percent of wine — and it has less to do with our tongue and more to do with our nose, Science Friday reports. So next time you have a really awful glass of wine, just hold your nose.

No one would describe Saudi Arabia as a country known for its gender equality. But, last week, there was a small step forward for women’s rights — the opening of the first female law firm.

According to Arab News, Bayan Mahmoud Al-Zahran opened a firm focusing on helping Saudi women. Al-Zahran is the first Saudi woman licensed to practice law in the country and says her goal is to help fight for women's rights and women's issues. She argues male lawyers often can't or won't understand what women need.

Remember, soap is for washing and milk is for drinking

Authorities have an urgent public health message for young mothers in China. Please feed your breast milk to your child, rather than converting it into a novelty soap.

The Taiwanese website Watch China Times reports on a trend in China where mothers are converting leftover breast milk into soap and selling it on various websites, claiming it whitens skin. But health officials warn that not only is there no evidence it whitens skin, it's possible that this soap will transmit diseases.

Meet the man who counterfeits the world's most famous diamonds — legally

The best diamonds in the world contain mysteries. And years ago, John Hatleberg was unlocking the mystery of one of the most famous when he found a new calling. PRI's The World tells the story of his decision to make his own rare diamonds — by knocking off the originals. He's so successful that diamond owners seek him out to copy their jewels.

The polar vortex that has swirled across much of the continental US has prompted countless comparisons. It's colder in Kansas than Alaska. It's colder in Minnesota than Mars. And Chicago is just plain cold. But take heart. Siberia is still colder. Despite an unusually warm winter that saw municipal officials parading around in bathing suits just a few days ago, temperatures there this weekend were in the ballpark of -40 degrees, according to The Siberian Times.