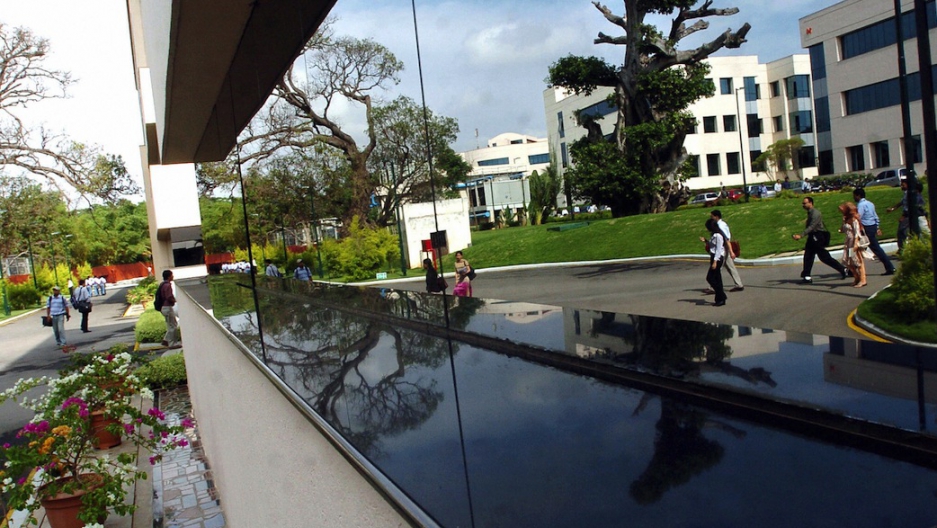 NEW DELHI, India — When news about an American company hiring Americans gets widespread coverage in India, there’s clearly something unusual going on.

So why would Indian newspapers, TV stations and financial websites be interested — arguably more interested than most US media — in the announcement by New Jersey-based IT firm Cognizant Technology Solutions that it will create 10,000 new American jobs?

The short answer is that most of Cognizant’s 166,400 staff are based in India. Only 29,000 work in the US, mostly at the firm’s headquarters in Teaneck, NJ.

Cognizant is a major player in the global outsourcing industry, and India is the world’s outsourcing hub. But most of its revenues come from the US.

In its most recent quarter, the company reported earning $1.78 billion in the US, boosted by “Obamacare.” Insurers and states hired Cognizant to help code online insurance exchanges.

For many Indian techies, working for a company like Cognizant is a chance for a US transfer and a slice of the American dream.

And those 10,000 new American jobs that got so much Indian media attention may mean 10,000 fewer jobs for them.

The US Congress created the H-1B visa program to enable American companies to hire foreigners with exceptional skills. Instead, critics say, it is increasingly being used to find workers willing to accept lower salaries. The program allows up to 65,000 high-skilled foreign workers to work in the US for up to three years. Competition is intense: The visas are handed out on a first come, first served basis and it took just four days for the 2014 quota to be filled after it opened on April 1, 2013.

Most come from India — 64 percent of last year’s applicants, according to the White House. Four Indian firms — Cognizant, Infosys, Tata Consultancy Services and Wipro — brought more than 26,000 Indians to work in the US in 2012 under the H-1B visa scheme, according to research by Professor Ron Hira, of the Rochester Institute of Technology.

Getting an H-1B visa has become a major career step for many IT graduates, and a major source of profit for the outsourcers.
For Indian workers, a job in the US means opportunities and money. For the outsourcing firms, the Indian IT workers are significantly cheaper than their American counterparts — by about 25 percent.

Tech companies have been lobbying to increase the cap — Facebook founder Mark Zuckerberg set up pressure group FWD.us to campaign on immigration issues. Microsoft founder Bill Gates has been a long-time advocate of making it easier for foreign-born high-skilled workers to immigrate.

“Since these [outsourcing] companies depend on the program so heavily they flood in applications,” Professor Hira told GlobalPost.

“The firms ‘bank’ visas — keep people back in India on the bench and then utilize them when needed. Also, they rotate workers in the US to ensure they don't establish roots, and rotate them back and forth to India. These firms are growing so fast that they need a bank of visas to meet any new growth.”

In the face of such intense competition, companies have been tempted to break the rules.

In October, Infosys paid a $34 million settlement to the Federal Government — a record for an immigration case — over allegations of “systematic visa fraud and abuse of immigration processes.”

Unable to get its cheaper Indian employees to the US to work on short term contracts, Infosys used a different visa — the B-1, normally given to foreign businessmen who need to travel to the US to complete deals.

According to an official from the Department of State’s Diplomatic Security Service, special agents spent two and a half years examining the records of 6,500 foreign Infosys employees on B-1 visas.

“Instead of attending ‘business meetings and discussions’ … many of these individuals … were working for Infosys in the United States, in violation of the conditions of their B-1 visas,” the official told GlobalPost via email.

Infosys employees were even given lists of words and topics to avoid when applying for the B-1 visas, including “implementation, design & testing, consulting” and “work, activity.”

The official was unable to comment on “ongoing investigations” but said the department wanted to “raise awareness about how the visa process is being circumvented.”

There are several other recent cases.

In addition to these cases, which cost US workers' jobs, US officials have been forced to defend the foreign employees from exploitation by the outsourcing firms.

In February 2013, Mumbai-based Tata Consultancy Services paid a $30 million settlement over its practice of forcing employees to sign over their tax refund checks when they finished working in the US.

There is an ongoing case involving 18 American IT workers who claim they were laid off from their jobs at Molina healthcare in Long Beach, California, to be replaced by Indian workers hired by Cognizant.

Despite these abuses, the IT industry says too few graduates come out of American universities to meet demand for jobs.

President Obama backed a bill passed in the Senate in early December, which would increase the 65,000 cap on H-1B visas to 115,000.

Yet several researchers say their work contradicts the IT lobby.

Unemployment rates are high for information systems graduates, with 14.7 percent out of work.

The competition from foreign workers also depresses wages for Americans. The average hourly wage for computer and mathematics graduates was $37.27 in 2000, and $39.24 in 2011 — an average rise of less than 0.5 percent per year.

And research from the Economic Policy Institute contends that only half of American students who graduate with a degree in science, technology, engineering or maths ends up with a job in that field.

According to a paper by Professor Hal Salzman and other researchers, a third to half of new IT jobs go to foreign workers rather than graduates.

Based on figures from the State Department, the Department of Homeland Security and Current Population Survey data, they estimate that 160,755 foreign workers were given H-1B or other work visas for IT jobs in 2011, out of 483,692 jobs that went to candidates with a bachelor's or master's degree.

“It has nothing to do with any lack of American workers,” Professor Hira said. “It is simply that the foreign workers will work for less.”

Neither Mark Zuckerberg nor FWD.us responded to GlobalPost's requests for comment.