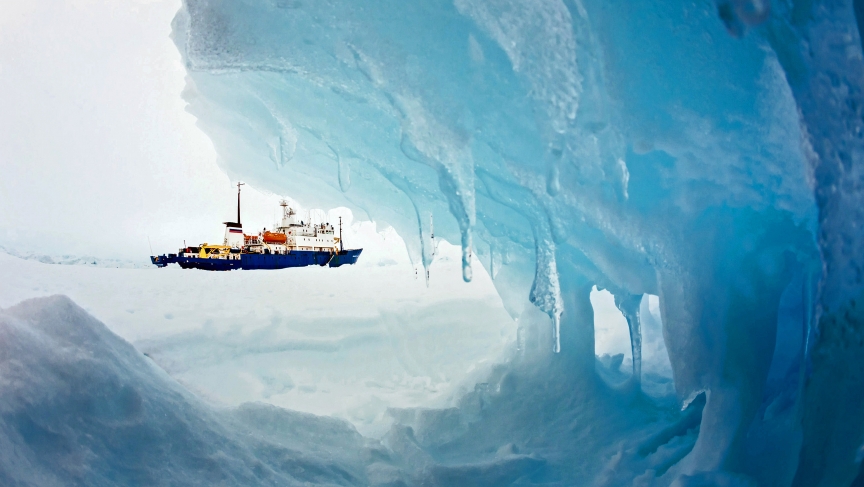 The MV Akademik Shokalskiy was stranded in ice off Antarctica on December 29. After a blizzard finally cleared, the Russian ship's 52 passengers were airlifted to a nearby icebreaker on Thursday.

The drama of that Russian research and tourist ship that’s been locked up in the ice near Antarctica is finally over, at least for the ship's scientists and paying passengers.

The MV Akademik Shokalskiy has been icebound since it sailed into a blizzard in unusually cold temperatures on Christmas Eve, at the start of the southern summer. The weather since then had been too lousy to allow icebreakers to come to the rescue.

But Thursday, in a truly international operation, all 52 passengers of the Russian ship were airlifted by a Chinese helicopter to an Australian icebreaker.

The BBC's Andrew Luck Baker was along for the ride the whole way. He decribed a 15-minute, “white knuckle” helicopter ride over the ice to bring the passengers to the Australian icebreaker Aurora Australis.

That ship will ferry the passengers back north to Hobart Australia, in Tasmania.

Meanwhile the Akademik Shokalskiy's 22 crew members will stay behind. But Australian Maritime Safety Authority spokesman John Young says neither they nor the ship are in danger.

"It's fully operational, it's fully prepared to be in the ice, it's well-stored and well-provisioned,” Young told the BBC. “The risks would be low for the crew."

The ship is icebound roughly 1700 miles south of Hobart.

It had originally set out to recreate an Antarctic expedition from 100 years ago, which also did not end well. Even worse, in fact. Two members of that expedition died and the ship's captain ended up stranded alone in Antarctica for more than a year.

By that measure the voyage of the MV Shokalskiy was something of an over-long Christmas party.

A timeline of the voyage of the MV Akademic Shokalskiy through just before the airlift of its passengers on Jan. 2.