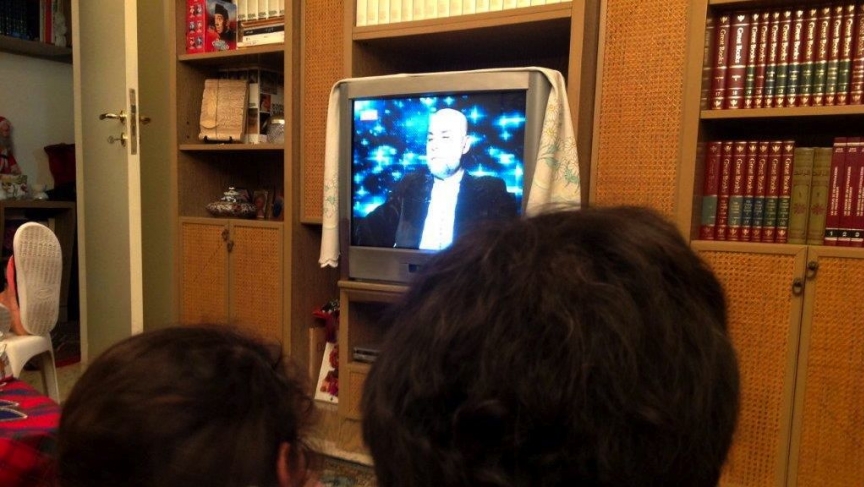 A Lebanese family watches TV fortune teller Mike Feghaly give his predictions for 2014.

On New Years Eve, a few hours before midnight, I sat with a family in the outskirts of Beirut.  We were piled into the living room, watching a serious-looking man on TV get interviewed.  On a background behind him, stars streamed past.  And stenciled onto his collar were the letters M and F.  They’re his initials.

This is Mike Feghaly.

Feghaly is one of a handful of future predictors in Lebanon.  New Years Eve is the profession’s big night, when they make their most watched and grandest predictions.  Each TV station has its own celebrated predictor, and OTV has Mike Feghaly.

We watch as he moves through a variety of topics quickly.  Feghaly says that Suleiman Frangieh, a politician in Lebanon, will become the president of the country.  He predicts the Maronite Christians will get their own pope.

The Lebanese family bursts out laughing.

In a country known for its patchwork of religious communities, I was curious to know who’s actually watching these secular future predictors, and why.  So on New Year's Day, I took to the streets.

A college student told me, “No, I don’t believe in them at all.”  It was a common response.  One woman who works at a local grocery store told me in translation, “They’re liars, they don’t know anything, and I think only God knows the future.”

When I pressed further, people usually admitted to watching, but only for entertainment.

I did manage to find a few believers, though, including one woman in downtown Beirut who was walking her dog.  She admitted with a shy smile that she did watch the future predictors on New Years Eve.  And when I ask her what they said that was worth remembering, she repeated the word for “assassination” four times in Arabic.

A concierge at a nearby apartment complex told me in translation, “We watch [these predictors] to see what awaits us in the future.”

One man from Syria said he watched last night to learn how his country would fare in the new year.  But he switched his TV on too late, and he only heard a general discussion about the fate of the entire Middle East.

I looked back at last year’s predictions for 2013.  Some came true, like the one that tsunamis would hit multiple countries in the world.  Others were false, including the one that we would be mourning the loss of Lady Gaga.  And many were so vague that they pretty much had to come true.

Regardless of which predictions are true or not for 2014, the family I was visiting outside Beirut had switched over to a different program in the moments leading up to the new year.

One with a countdown.