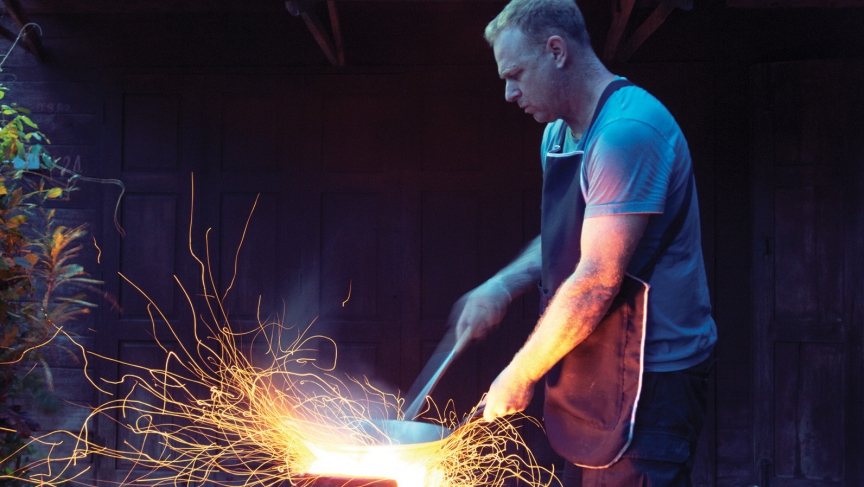 There are just some recipes you won’t find in Chef Andy Ricker’s latest cookbook, “Pok Pok: Food and Stories from the Strees, Homes and Roadside Restaurants of Thailand” or on his restaurant's menu.

"I would try to reproduce these dishes [and] I was having a terrible time because I couldn’t find the ingredients that I needed," he says. "My solution to not being able to get those really specific, regional things was to just—I don’t make those dishes at the restaurant."

And Ricker, the James Beard award-winning chef based in Portland, OR, is all right with that.

Pok Pok, his restaurant with locations in Portland and Brooklyn, has already garnered acclaim from foodies and critics around the world. And with a new year on his plate, Ricker reflects on his travels to Thailand and how one mushroom opened his eyes to the country's diverse cuisine.

I had come to Chiang Mai to see my old friend who I had grown up with, who had moved to Chiang Mai, married a local woman and they had a couple of kids. And he was working as a financial consultant, she, as a teacher at the university.

Chiang Mai is in the north of the country in northern Thailand—it’s landlocked, so there’s a lot of jungles, rivers, mountains. And the people there tend to eat a lot of gathered herbs, they farm rice, they catch fish in the rivers and the food there is entirely unlike the center part of Thailand, where there’s a lot of coconut milk, limes, all that kind of stuff.

And in May, in Chiang Mai, in northern Thailand, there's a lot of wild mushrooms that start popping up and one of them is called het-top. Het, meaning mushroom and top --I don't know what that means, but it’s kind of like a 'puffball' mushroom. It's kind of dark brown, kind of rubbery, a little bit bitter and my friend, Lak Nan, knew of a place where the guy really knew how to make a good version of gang het top.

It’s like a brothy soup-- it had some pork ribs in it and some local greens, that were unlike anything I’ve ever had before. There were lots of chopped herbs in it, that I couldn’t really identify as well as the mushroom, that had flavored [the soup] to be kind of bitter. So it was this dark, herbaceous, bitter soup that wasn’t sweet at all...or sour --it was just really kind of mouth-filling without being heavy.

I had this moment where I thought ‘Oh, well of course the fact that this mushroom only exists at a certain time of the year --this must be some kind of a keyhole for me to recognize the northern Thai regional cuisine.' From that point on, I was really intrigued by the fact that this dish existed, so I figured there must be other things out there too.

So I started pestering my friends, and their families and I started going back to Thailand every year, for two, three months at a time and just began to cook with people, go to the markets, pursue my education. And now I’ve got 20-plus years under my belt, of just going there and really obsessively pursuing the cuisine of that region.

So when I first got back to the States, I would try to reproduce these dishes [and] I was having a terrible time because I couldn’t find the ingredients that I needed. My solution to not being able to get those really specific, regional things was to just—I don’t make those dishes at the restaurant. So we don’t serve gang het-top at the restaurant because it doesn’t exist here.

In a way it’s what keeps things special for me when I go back to Thailand, I know that I’m going to find something there --whatever time of year I go-- that I may only be able to get there, in that time. It just makes me want to go back again, and again, and again.

To try the gang het-top soup, Ricker experienced in Chiang Mai, you'll need to hop on a plane to Thailand. But, in the meantime, here's a recipe from Ricker's new cookbook for another northern Thai soup called, Jaw Phak Kat.