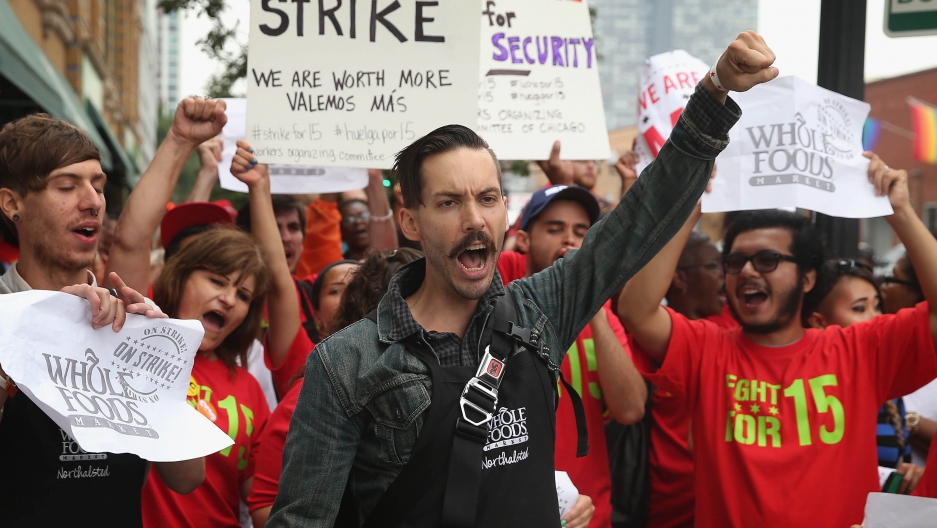 July 31, 2013- Whole Foods Market employee Matthew Camp protests with other employees and union activists outside a Whole Foods Market store on July 31, 2013 in Chicago, Illinois. The demonstration is one of many scheduled against fast food and retail stores in several cities nationwide. The campaign, dubbed "Fight for 15", calls for workers to be paid at least $15-per-hour and have the right to form unions without retaliation. Similar protests are scheduled in New York City, St. Louis, Detroit, Milwaukee, Kansas City and Flint, Michigan.
Credit: Scott Olson
Share

Lawmakers have voted to raise the minimum hourly wage by as much as $1 in some states. In New Jersey, for example, the state’s minimum wage will increase by $1 to $8.25 an hour.

The policy changes mean that, starting Jan. 1, 21 states will have minimum wages that are more than the federal minimum of $7.25 an hour.

The National Employment Law Project said as many as 11 more states plus the nation’s capital are likely to look at minimum wage increases in 2014.

An ABC/Washington Post poll published last week found that two-thirds of Americans think the minimum wage should go up. More than one-third of respondents said an increase to $9 per hour is reasonable.

Washington currently has the highest state minimum wage of $9.19 an hour.

Fast food workers and Wal-mart employees staged protests in least 100 cities this year to call attention to their requests for a $15-an-hour wage.