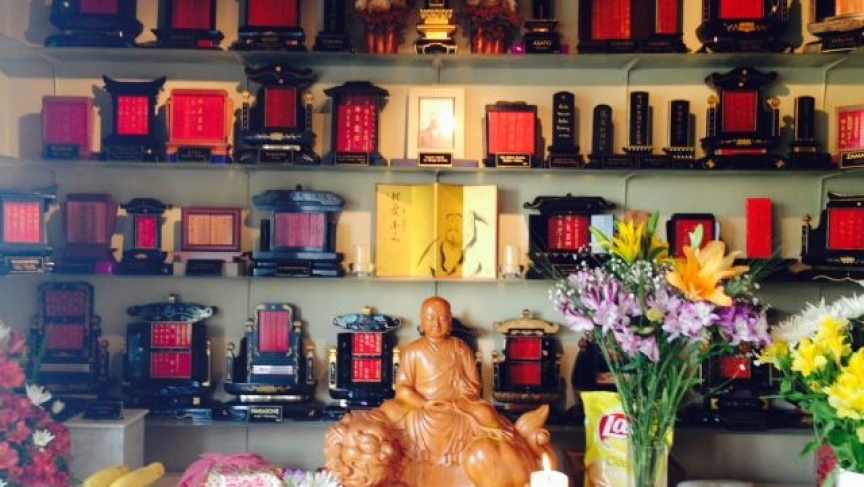 A small group of people from the Japanese community recently gathered at the temple in Lima to chant and make offerings to their deceased relatives. On the altar were plates of sandwiches and cakes; even a bag of Lay’s potato chips.

One of the unintended consequences of Peru’s booming economy is that life in the capital is becoming more stressful. Lima is covered in construction sites, competition for the best jobs, and housing is brutal, and traffic is horrendous. Still, people there are finding creative ways to relax in the midst of all that. Some of them are turning to Buddhist meditation.

The oldest Buddhist temple in South America is just outside Lima, in a town called Cañete. It’s one large room with tile floors that feel cool under bare feet. The enormous altar is filled with incense, flowers, and small wooden statues that represent members of Japanese families that started migrating here in the early 1900s. Some families have also chosen to leave actual remains, in urns wrapped in knotted bundles of white cotton.

“Those urns contain remains of the first immigrants who came to Peru,” says Carmen Toledo, the temple caretaker, pointing to a few urns on the highest shelf.

She tells me that after Brazil, Peru has the second largest Japanese population outside of Japan. They hung onto a lot of traditions, Toledo says, building this temple and also incorporating Japanese food into Peruvian cuisine. But she also mentions that now fewer and fewer people come to worship here. Those who do are usually elderly because most of the children of Japanese immigrants converted to Catholicism.

When I talk to Aurora Oshiro, the monk who leads the Buddhist community in Lima, she says most of the people who show up at her small temple downtown don’t have Japanese roots. They seek out Buddhism for other reasons.

“Most people tell me they come to find a little more serenity, to not get annoyed so much, or even because the doctor told them they needed to come."

Oshiro adds that “people seem to be starting to look inside themselves more.”

Maybe that’s because they’re looking for something to counter Lima’s seemingly infinite chaos, says Julio Hevia, a Lima psychologist. He cites the example of the city’s crazy traffic, with its every-man-for himself sensibility: “Until finally at some point, you’re at the very edge of a collision, and someone has to give in. You see this happen all over the place, over and over.”

It’s one reason Mariana Soria, who’s in her thirties and works in arts administration, now goes to the Buddhist temple in Lima to meditate twice a week. Soria’s family doesn’t have Japanese roots, and her parents are devout Catholics. She began meditating about a year ago.

“I think that I’m looking at things that I didn’t look at before. I’m interacting with people in a different way than I did before -- and I’m referring to all sorts of things: family, friends, my work colleagues, situations I find myself in,” Soria says.

On a recent Sunday, a small group of people from the Japanese community gathered at the temple to chant and make offerings to their deceased relatives. On the altar were plates of sandwiches and cakes; even a bag of Lay’s potato chips.

“The ceremony is important to me because I want to follow family tradition,” says Pedro Iré, who is in his late sixties.

Aurora Oshiro, the Buddhist monk, says connecting these two worlds – offering a space for the Japanese community, while integrating people from other backgrounds – is what keeps the temple going. And while Lima might be a more stressful place, she says it’s also become more accepting.

“Lima used to be more closed. Now people aren’t so suspicious of Zen meditation,” she says.

She adds that her shaved head doesn’t scare them anymore.

Annie Murphy reported her story in conjunction with our partner program Radio Ambulante.