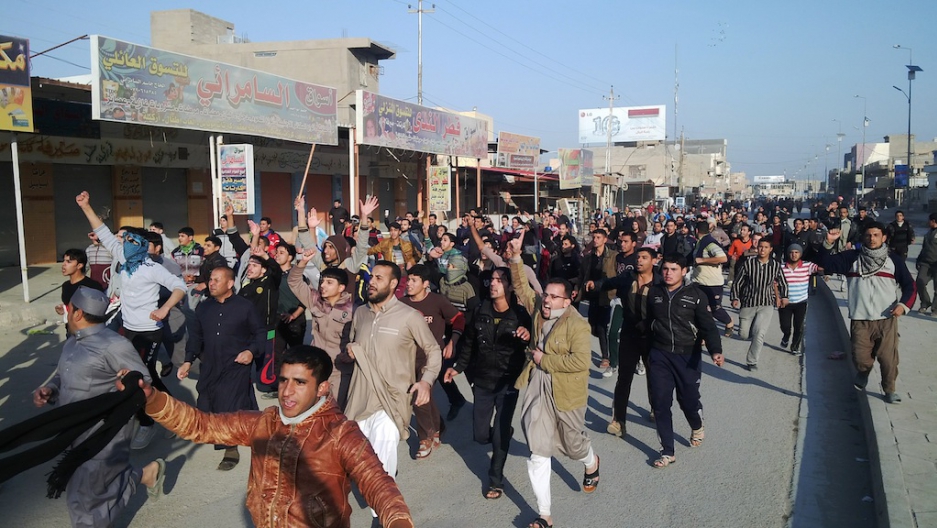 Iraqis march during a protest against the arrest of MP Ahmed al-Alwani in Ramadi, west of Baghdad, on December 28, 2013.
Credit: AZHAR SHALLAL
Share

At least 13 people are dead following the tearing down of a Sunni Muslim camp in western Anbar province by Iraqi police on Monday.

The camp was erected a year ago in Ramadi by Sunni protesters. They wanted to draw attention to what they claim is the marginalization of their sect by Prime Minister Nouri al-Maliki's Shia Muslim-led government.

Maliki had accused protesters of sheltering Al Qaeda-linked militants at the camp. Eight days ago, he ordered the Sunnis to evacuate the camp because it had become "a headquarters and a cover" for Al Qaeda.

Denouncing Maliki's government as a "sectarian government that wants to smash and eradicate the Sunni people in its country,” Sheikh Abdul Malik Al-Saadi, an influential Sunni cleric, urged Sunni ministers and parliament members to resign to protest the operation.

Forty-four Iraqi MPs announced their resignations on Monday. The parliament members demanded "the withdrawal of the army... and the release of MP Ahmed al-Alwani," a Sunni who was arrested by the government on Saturday.

More from GlobalPost: Sunni and Shia divided in Iraq, the land of Cain and Abel