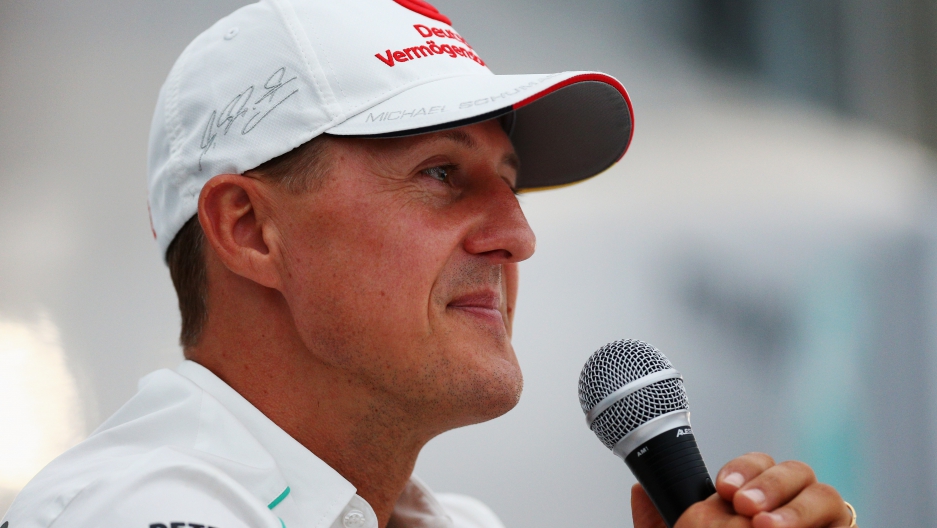 Michael Schumacher of Germany and Mercedes GP announces his retirement at the end of the season during previews for the Japanese Formula One Grand Prix at the Suzuka Circuit on October 4, 2012 in Suzuka, Japan.
Credit: Clive Rose
Share

Michael Schumacher, legendary Formula One driver, is fighting for his life in hospital after a ski accident in the French Alps on Sunday.

Schumacher, 44, the most famous race car driver in the world, suffered a severe head trauma and slipped into a coma after crashing while skiing at the Meribel resort in France.

He reportedly hit his head on a rock.

Authorities said that he was rushed to University Hospital Center of Grenoble and required immediate brain surgery.

Initial reports said that Schumacher's injuries were not serious but later reports clarified their severity.

On Monday, Jean-Francois Payen, head of intensive care at Grenoble, said Schumacher was "in critical condition. One can describe it as life-threatening."

The hospital said Schumacher suffered from "major brain trauma" and while his limbs moved "spontaneously," he was not able to respond to questions.

Neurosurgeon Stephan Chabardes said a post-operation scan revealed "widespread lesions on both sides of the brain."

"We ask for understanding that we cannot give running updates on his condition. He wore a helmet and was not alone," said his assistant in a statement.

After his operation, Schumacher was moved to an intensive care unit in the hospital where doctors are keeping him in a state of hypothermia to cool the brain to 34 to 35 degrees Celsius and reduce pressure caused by swelling.

"The problem with any acute brain injury is that the brain is a very delicate organ. The skull cannot expand, so when the brain swells, the pressure goes up, and it constricts its own blood supply. It cuts the oxygen to the brain and worsens the damage, and that could potentially kill him," Peter Andrews, professor of intensive care at Edinburgh University and an expert in using hypothermia to reduce brain pressure, told the Guardian.

It is believed Schumacher owns property at Meribel resort, and was skiing off-piste (unmarked slopes) near the Dent de Burgin area of the resort when he fell.

He was reportedly skiing with his 14-year-old son when the accident occurred.

Schumacher began his Formula 1 racing career in 1991. He retired in 2006, having won a record seven world titles, most of those with Ferrari.

CNN reported that Schumacher was a fearless skier who had decades of experience.

"Schumacher wasn't a skier when he joined Ferrari (in 1996) but by the end he was excellent. Each year Ferrari used to have a media week in the Alps in Italy and they would always have a race — and it was always Schumacher who won. He was a genuinely quick skier."

He added: "But he was always very mindful of the danger around him. I approached him for an interview at the top of the slope and he said it would have to be quick as he wanted to check the piste. That meant he wanted to make sure he understood the slopes, the cambers, even though it was only a fun race."

Celebrities and racing colleagues tweeted their condolences to Schumacher and his family following the news:

Come on Michael, give us one of those race stints at pure qualifying pace to win through, like you used to. You can do it.

Thoughts are with Michael Schumacher and his family. Hard for me to accept as I always believe that he was invincible.

#OMG can't believe the news, Schumacher is fighting for his life after ski crash. #KeepfightingSchumacher pic.twitter.com/ujULkbAURq

My thoughts are with Michael Schumacher at this tough time.. Michael more than anyone has the strength to pull through this.