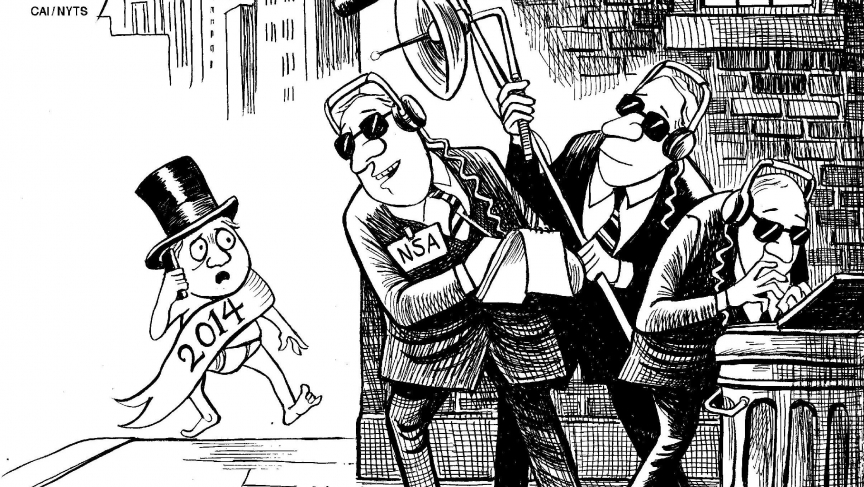 The NSA prepares to welcome in the new year.

Some Chinese officials may have just had their New Year's resolution dictated to them by the Communist Party.

A new regulation directs government leaders to "refrain from smoking in government offices, schools, hospitals, sports and cultural venues and on public transport," according to The New York Times. The new regulation also directs Communist Party officials to encourage others not to smoke in public places.

China has tried to ban smoking in public places with various intensity since 1993, but those efforts have largely been unsuccessful. The new measure, which was announced on news programs on Sunday, seems like an effort to amp up the pressure and get smoking pushed out of the public space.

France tells Uber to park it — for 15 minutes

France says its cab industry is threatened by Uber, the popular American ride-calling service that's expanded to several overseas cities. In order to make things a little easier for cabbies, a new law requires Uber drivers to wait 15 minutes before picking up passengers. Uber has vowed to fight the new measure, which snuck through Parliament largely unnoticed. The measure applies to other similar services as well, including SnapCar and LeCab, Engadget reports.

With the Olympics in Sochi little more than a month away, the spate of terrorist bombings in Russia are presenting a big problem for Russian President Vladimir Putin, who has invested a great deal of personal pride in these Olympic games. The Guardian writes that the attacks are an indication that the Kremlin's strategy for dealing with the North Caucasus has failed.

The twin bombings, which killed 32 and injured more than 100, bode ill for security at the Olympics. In fact, this summer, Russia's chief insurgent leader, Doku Umarov, warned that he would blow up Sochi specifically.

Detroit had a troubled 2013, becoming the largest city to file for bankruptcy court protection. As part of the bankruptcy, the city sold the famous Packard Plant — a building that spans nearly 40 acres and closed more than 60 years ago. Spanish developer Fernando Palazuelo, who lives in Lima, Peru, bought the building and has big plans for a major makeover.

Palazuelo says he was shocked by the price he paid for the building — a mere fraction of what he would have had to pay in Spain, or even in Peru these days. He paid just $400,000. He plans to overhaul the whole thing, which he says will take at least another $350 million, and turn it into a mixed-use space, with light industry and tech companies, artists' studios and apartments, PRI's The World reports.

Singer-songwriter Beck is being accused of trashing the $11,000-a-month Malibu mansion of German Inglourious Basterds actor Til Schweiger. Beck rented the home from 2010 to February 2013, according to The Independent. Schweiger has filed suit against Beck, accusing him of doing "unauthorized" work on the building that cost almost $41,000 to repair. Schweiger is seeking more than $56,000 in damages and unpaid rent. Beck contends the mansion was already in bad shape when he moved in — and has sued to get his $11,000 security deposit back.

It's time to move for the US Marines

The US Marine base on Okinawa is finally moving — after 17 years of false starts and delays. Marine Corps Air Station Futenma, which has been used by US forces since the end of World War II, will be shuttered and the US Marines based there will move to a new base on the north side of the island — an area less populated than the current, heavily urbanized area. Many on Okinawa had called for the base to be relocated off Okinawa entirely — something the central Japanese government and the US Pentagon were opposed to.

While some Marines will be shifted to new bases in Guam, Australia and Hawaii, a large contingent will remain. PRI's The World reports on the different reactions to the current plan.

An Antarctic blizzard has forced Australian officials to suspend a mission to rescue a Russian ship trapped in ice near the southern continent, according to The Jakarta Globe. The Australian icebreaker Aurora Australis turned back just 18 nautial miles from the MV Akademik Shokalskiy, the Russian ship that's been trapped for nearly a week with 74 people on board. There's no word when the weather will subside so another rescue attempt can be made.