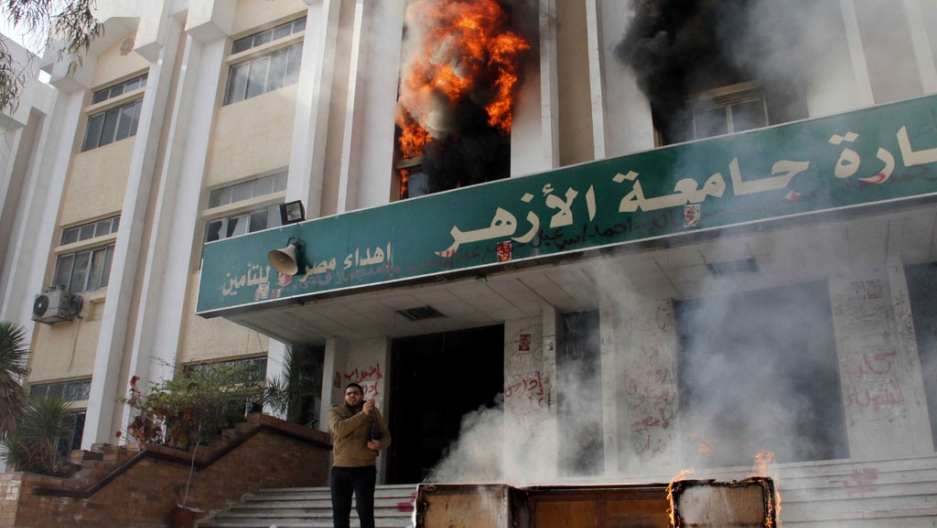 A man stands outside a faculty building at Cairo's Al-Azhar University after student supporters of the Muslim Brotherhood stormed it on Dec. 28, 2013.
Credit: Khaled Kamel
Share

CAIRO, Egypt — The designation of the Muslim Brotherhood as a terrorist group marks a deep divide in Egyptian society, fueling suppression not only of the Brotherhood but of the broader democratic opposition as well.

"There is a transition toward fully entrenched autocracy," said Shadi Hamid, director of research at the Brookings Doha Center think tank.

Egypt's cabinet announced Wednesday that the Muslim Brotherhood, whose candidate for president, Mohamed Morsi, ruled until his military-backed ouster in July, would be considered a terrorist group.

The cabinet cited the Brotherhood's alleged involvement in a string of violent attacks including the bombing of a security building the previous day, which killed 16 people, but offered no evidence to support its claims.

A jihadist group based in the Sinai peninsular, Ansar Bayt al Maqdis, took responsibility for the attack.

“By rushing to point the finger at the Brotherhood without investigations or evidence, the government seems motivated solely by its desire to crush a major opposition movement,” said Sarah Leah Whitson, Middle East and North Africa Director of Human Rights Watch, a New York-based watchdog, in a statement.

Lawyers here called the validity of the decree into question, arguing that only the courts have the power to lawfully designate a group as terrorist.

Nonetheless, the Ministry of Interior announced a series of penalties which it said would apply to those organizing or participating in Brotherhood activities such as demonstrations. Leading a demonstration, they said, could be punishable by death.

Khaled Mansour, director of the Egyptian Initiative for Personal rights said: "In terms of legal impact, this decision, at best, is ambiguous and probably has no consequences in a court of law. A court would have to base such a designation on investigations and evidence."

But Nathan Brown, a professor of political science and international affairs at George Washington University who has studied Egypt's judiciary, argued that in the current, vitriolic political climate the cabinet decision "may well lead to a political atmosphere in which the evidentiary standard for making charges like this goes way, way down."

An Interior Ministry source, who spoke on condition of anonymity, claimed that the ministry had evidence of coordination between jihadi groups and the Muslim Brotherhood, including the office of former president Morsi during his presidency. The source declined to disclose any further details.

Lawful or not, the announcement has inaugurated a new phase in the suppression of the Brotherhood, which has officially been banned by court-order since September, and whose leaders are almost all in jail or exile.

Six demonstrators in support of former President Morsi were killed as security services cracked down on protests Friday and Saturday. More than 300 have been arrested since Thursday, according to reports.

Local offices associated with the Brotherhood were raided, and a private television station advertised a telephone hotline for members of the public to report Brotherhood members. Private newspapers exhorted the government to greater efforts.

Al-Watan, a nationalist daily, wrote on Wednesday: "From the people to [armed forces chief] El-Sisi: We granted you the mandate … and we will slit the terrorists' throats." Al-Youm Al-Sabaa carried a banner reading: "the people demand the execution of the Brotherhood."

A poll by the Egyptian Centre for Public Opinion Research indicated that 35 percent blame the Brotherhood for Tuesday's bombing, while only 6 percent blamed the jihadist group which claimed the attack.

Analysts argued that the level of polarization and violence is such that there is little prospect that the group will compromise or return to peaceful institutional politics.

Shadi Hamid, of the Brookings Doha Center, who studies the Brotherhood said: "Every time there are rumors that the Brotherhood is talking to the regime you see real opposition from the rank and file saying — how can you sell us out like this? The base has no interest in making a deal, for them it's very personal now. They've all had friends or relatives who have been killed."

A young Muslim Brotherhood member who has been involved in protests for the last six months told GlobalPost at a downtown cafe that more than 15 of his friends had been killed since Morsi's ouster, and that he was determined not to abandon the cause for which they had died.

At times nervous that he was being watched by an informant, he nonetheless said that his branch or "family" of the Brotherhood was still functioning, albeit at a lower level and more secretively than before. Since the terrorist designation, he said, police had been making more of an effort to arrest demonstrators.

He spoke on condition of anonymity.

The crackdown extends not simply to the Brotherhood but also to all the revolutionary movements and liberal opposition. Three leading members of the April 6 youth group, a leading force behind the 2011 revolution, were sentenced to 3 years hard labor last week for organizing unauthorized protests. In some quarters, they are referred to as a "fifth column."

Now, members of the Brotherhood hope that the current government gradually loses support, much as they did during their year in power, due to a failure to meet the expectations of the street.

Hamid says the Brotherhood "wagers that in six months to a year the regime coalition will erode because of worsening economic conditions and that things will move gradually in their direction. Their strategy depends on the economy getting worse."