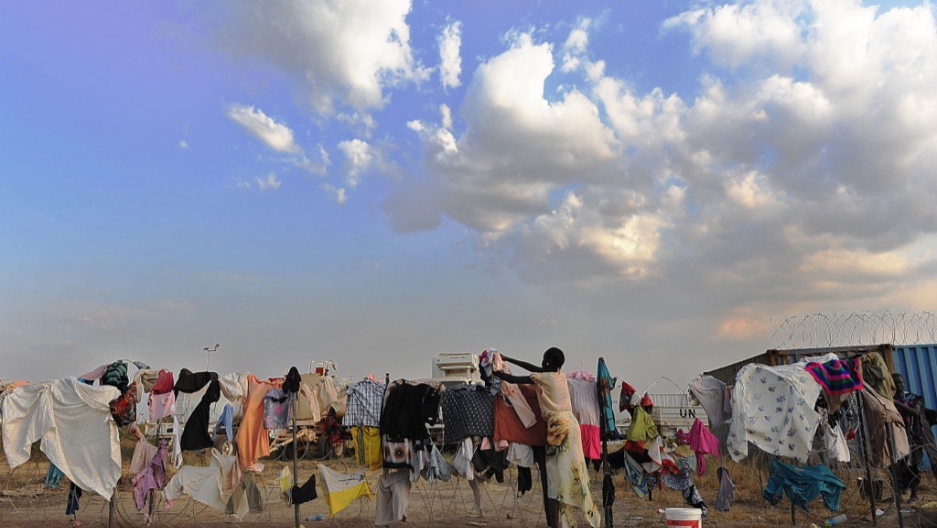 A South Sudanese girl puts her family's laundry out to dry on a barbed-wire fence at a makeshift camp at the United Nations Mission in South Sudan (UNMISS) compound in Juba on Dec. 22, 2013. At least 62,000 people have already been forced from their homes in the latest violence, 42,000 of whom have sought shelter at UN compounds, turning the bases into de facto refugee camps.
Credit: TONY KARUMBA
Share

The government of South Sudan was committed to an "immediate cessation of hostilities," East African leaders announced in a statement on Friday, urging rebel leader Riek Machar to commit to the same.

The heads of state issued the statement after a meeting of the Inter-Governmental Authority on Development (IGAD) in Nairobi. The group urged opposing sides in South Sudan to hold talks by Dec. 31, and agreed to consider taking further action if hostilities did not come to an end within four days.

"[IGAD] welcomes the commitment by the government of Republic of South Sudan to an immediate cessation of hostilities and calls upon Dr. Riek Machar and other parties to make similar commitments," a communique from the 23rd Extraordinary Session of IGAD said.

Machar told BBC News via satellite phone that the rebels needed assurances that the ceasefire was serious and would be properly monitored before they could agree to it. "Until mechanisms for monitoring are established, when one says there is a unilateral ceasefire, there is no way that the other person would be confident that this is a commitment," he said.

He also reiterated the rebels' demand for the release of all 11 Machar allies detained by the South Sudan government for plotting a coup be released. Two detainees have been released so far.

"Let it be known that we in IGAD will not accept the unconstitutional overthrow of a duly and democratically elected government in South Sudan. Violence has never provided optimum solutions," said Kenyatta.

Meanwhile, both sides insisted they were in control of Malakal, the capital of oil-producing Upper Nile State, following reports of heavy fighting overnight.

Rebel spokesman Moses Ruai Lat said "the whole of Malakal" was now in the control of Machar loyalists, who have already taken over Bentiu, capital of neighboring Unity State.

More from GlobalPost: How South Sudan ended up at the brink of civil war

The conflict in the barely two-year-old nation has seen 121,600 people fleeing their homes, according to the UN. While an estimated 25,000 were displaced in the capital alone, some 63,000 people have sought refuge at the UN's peacekeeping bases in Juba and the towns of Bor, Malakal, Bentiu and Pariang.

"This is an extremely difficult time for the people of this new nation, and it is crucial that aid agencies have the resources they need to save lives in the coming months," said Toby Lanzer, the UN humanitarian coordinator in South Sudan. "There are at least 90,000 people who have been displaced in the past 10 days."

The UN also announced on Thursday it was speeding reinforcements to its peacekeeping force in South Sudan.

"We are working on 48 hours delivery of several of the critical assets that we need," and the first reinforcements should arrive by Saturday, the world body's special envoy to the violence-wracked country, Hilde Johnson, told journalists via video conference from Juba.

Earlier this week, the UN Security Council agreed to nearly double the size of its peacekeeping mission in South Sudan to 12,500 soldiers.