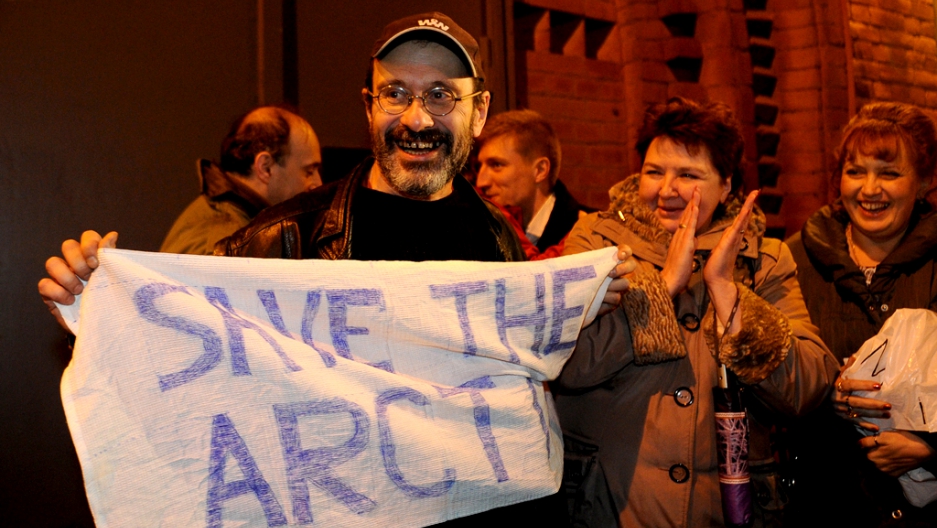 Greenpeace International activist, one of the "Arctic 30," Dimitri Litvinov from Sweden holds a banner as he leaves a SIZO detention centre in Saint Petersburg, on November 22, 2013, after being released on bail.
Credit: OLGA MALTSEVA
Share

Russia has begun issuing exit visas to the activists who were arrested aboard a Greenpeace protest ship, while the last criminal case was dropped against the 30 involved.

"Fourteen people have been given a visa," Greenpeace spokesman Arin de Hoog told Agence France-Presse. "They will depart from Russia in the coming days."

More from GlobalPost: These attention-grabbing stunts devised by Greenpeace are amazing

The remaining crew members are expected to be granted their exit visas by Friday.

Swedish native Dmitri Litvinov, the first activist to leave Russia, was allowed to depart for Finland by train on Thursday, reported the Associated Press.

The Russian parliament voted to extend a pre-Olympics amnesty decree to the Greenpeace activists, ending their two-month-long detention.

The 30 activists and journalists were arrested in September after two of them boarded a Russian oil rig in protest against Russia's oil extraction in the Arctic.

Although they may have been released, the Greenpeace activists have not given up their environmental crusade — declaring, per a Greenpeace release, that "there is no amnesty for the Arctic."

"Right now my thoughts are with our Russian colleagues. If they accept this amnesty they will have criminal records in the country where they live, and all for something they didn’t do. All because we stood up for Arctic protection," she said.

Here's a Reuters video looking at the Greenpeace amnesty offer: