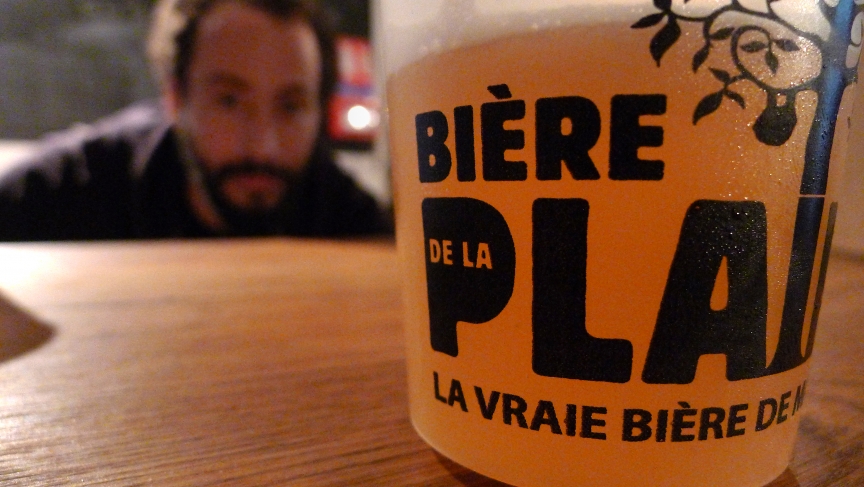 Salem Haji, co-owner of one of the few microbreweries in France, inspects his latest blonde IPA at his brewery, Biere de la Plaine, in downtown Marseille.

In the southern port city of Marseille, France, one man is brewing up a bit of a beer culture, in a country traditionally valued for its wine.

At an outdoor terrace in Marseille, three couples bring their glasses together to make a toast — with beer — regular, old, watery, tap beer. In French, one of the gentlemen in the group says, “Hey, this beer quenches the thirst,” which, if you think about it, doesn't seem like a very French answer.

The French don't just sit down at a bistro and order alcohol to quench their thirst. They order booze because it goes well with buttery foie gras, pungent raclette or plain old brie cheese. In other words: the French order wine. In this country, beer has traditionally been left out in the cold.

But why? Why is it that, in a country where food and drink are so valued, beer has been overlooked for so long?

“I think it is because since 60 years ago, after the war, we started to have industrialization of beer,” says Salem Haji, who co-owns Marseille's first, and only, microbrewery. “And the beer became this alcoholic water that we know now. The big breweries bought the small ones just to get a monopoly. So people thought, beer is just refreshing.”

His shop is called Biere de la Plaine. It is part store, part bar, and part tubes, tubs and bottling machines. His goal: to crush the beer stereotypes in France, like a cigarette under his boot.

“I think cheese and beer goes better than cheese and wine, especially red wine,” he says. But I remind him that what he’s just said is considered blasphemy in France.

Haji then turns his attention to one of a steady stream of customers coming into the store. As he's explaining how his IPA has hints of mandarin orange to a very excited, if not perplexed-looking guy, something occurs to me:

He's the Walter White of microbrew. Haji nods knowingly and mentions a recent newspaper article that featured his microbrewing endeavors. He says they published a photograph of him in a large apron.

But ‘Brewing Bad’ is brewing pretty well. I know this because Haji is plying me with his latest brew called Chinook — a beer made with hops from the Pacific Northwest of the US. And it’s even available in local wine shops — another first in Marseille.

“I like to eat smoked fish with [Haji’s] porter or stout,” he says. “I asked myself, ‘why?’ Then I realized the stout has a hint of soy sauce in it, so, in my mouth, I have the sensation that I'm eating sushi.”

Across France, microbrews are quickly gaining fans. The fan-base is largely centered in the north, where taxes on really good Belgian beers have turned some French into barley and hops entrepreneurs. Marseille, a city in the south of France, is a far-flung frontier of microbrewing. But Haji's confident he's got a hit on his hands.

So, at the dive bar across the street, I put the IPA to the ultimate test. I buy a round of industrial tap beer for a couple of wobbly-legged clients named George and Jacques. Then I take one of Haji's bottles from my bag and pour it in a second glass. George sniffs Haji’s IPA, takes a sip, and almost seems to forget it's beer.

“There's a little something there,” he says, licking his lips. “What is that? I wouldn't say sugary, but fruity. I couldn't say what — but it is very agreeable. Grapefruit perhaps? Or violet.  I find that very nice.” He finishes the glass — without sharing.