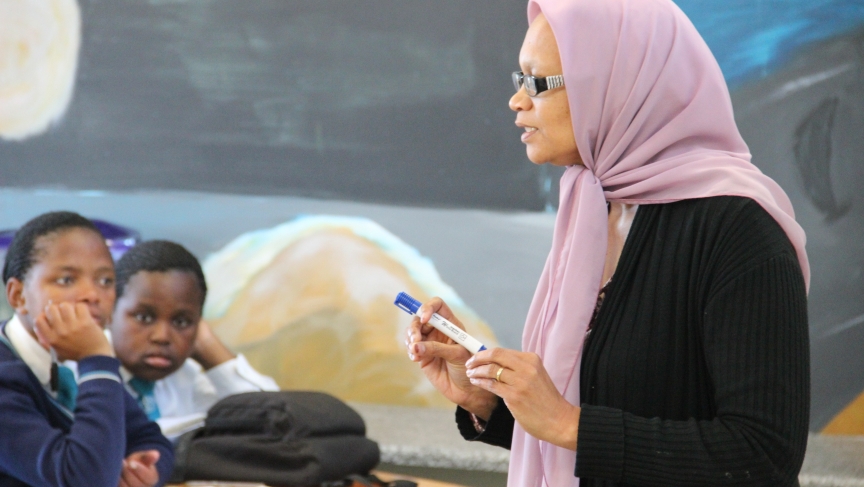 On a recent morning, Phadiela Cooper closed the door to her office. She is the principal at the Centre of Science and Technology (COSAT), a public high school near Cape Town, South Africa. A nervous ninth-grader stood in the corner.

“You are in serious trouble,” Mrs. Cooper said to the girl.

A science teacher, Estelle Van Schoor, then laid out a list of complaints against the student: “Your attitude, your behavior, your disrespect…” The girl had been repeatedly disrupting class.

“So, we’re going to call in your parents to discuss this issue,” said Mrs. Cooper, the principal. “Because this is going to stop, right now.”

The girl was sent back to class. Mrs. Cooper leaned back in her chair and sighed. I asked if she and Mrs. Van Schoor were as upset as they looked.

Mrs. Cooper said she finds it hard to act tough with COSAT’s students. Like many of them, she grew up poor. When she was a student, she could barely afford school supplies.

“I had to look for where am I going to find money to buy exam pads or pencils to take notes,” she said. “It was a struggle.”

Despite those challenges, she excelled in school. Still, when she finished high school, she didn’t think college was an option. Her parents expected her to work and support the family.

But her teachers encouraged her to apply to college — and helped her get a scholarship.

“I suppose they saw potential in me, and they saw that I would be able to succeed. I didn’t believe that much in myself then,” Mrs. Cooper said.

After she graduated from college, she wanted to teach and encourage more students to pursue higher education — the way her teachers had encouraged her. So she taught high school math.

From teacher to principal

Mrs. Cooper says she probably would have stayed a teacher forever, but she was forced to make a change. A few years ago, COSAT’s principal left the school. Mrs. Cooper says she expected one of the other more experienced teachers to take the position. Instead, those teachers approached her. They told her she had what it takes to be a good principal — a strong work ethic and good people skills.

“And then they said, well, if you don’t do it, then who’s going to do it?” she recalled. “So I was sort of gently coerced into the job.”

South Africa, like some other developing nations, doesn’t require principals to have an advanced degree or formal training in school administration. Mrs. Cooper simply rose to the job through the ranks.

She said the transition from teaching to being a principal has been harder than she expected.

Part of the problem is that COSAT is stretched thin. There is no assistant principal, so Mrs. Cooper oversees all administrative work. The school can’t afford a counselor, so that job falls to her. And the school has no nurse, so Mrs. Cooper often plays that role, too. Earlier this year, a twelfth-grader named Lusanda developed a serious stomach problem, and she said it was Mrs. Cooper who looked after her.

“She took me to my doctor. She was very worried. She even called me at night,” Lusanda said.

But looking after everyone else has taken a toll on Mrs. Cooper.

The most difficult part of the job has been managing the staff.  Earlier this year, she felt that some teachers weren’t working hard enough, and she feared that the quality of instruction at the school was falling. But she didn’t know how to confront the teachers.

“How do I sit a teacher down and tell her or him, ‘Listen, you are not performing’?” she asked. “I don’t have the heart to do that.”

She avoided tough conversations. Her stress levels grew. Then, a few months ago, she reached a breaking point. She couldn’t sleep. She had memory problems — sometimes forgetting entire conversations.

“There was a stage where I actually couldn’t function. And that’s when I realized that I had to go to the doctor and talk about this,” she said.

The doctor diagnosed her with acute stress.

That episode led Mrs. Cooper to an important realization: she needs professional training to be a more effective principal. So she applied to a program, called the Principals Academy, that teaches leadership and management skills. She was recently accepted and begins the program this month.

Under Mrs. Cooper’s leadership, COSAT has excelled. It has one of the highest graduation rates of any public high school in South Africa. The teachers praise what she has accomplished, but Mrs. Cooper sees how much farther she has to go.

“I need to still learn so much for me to do a real proper job of being a principal,” she said.