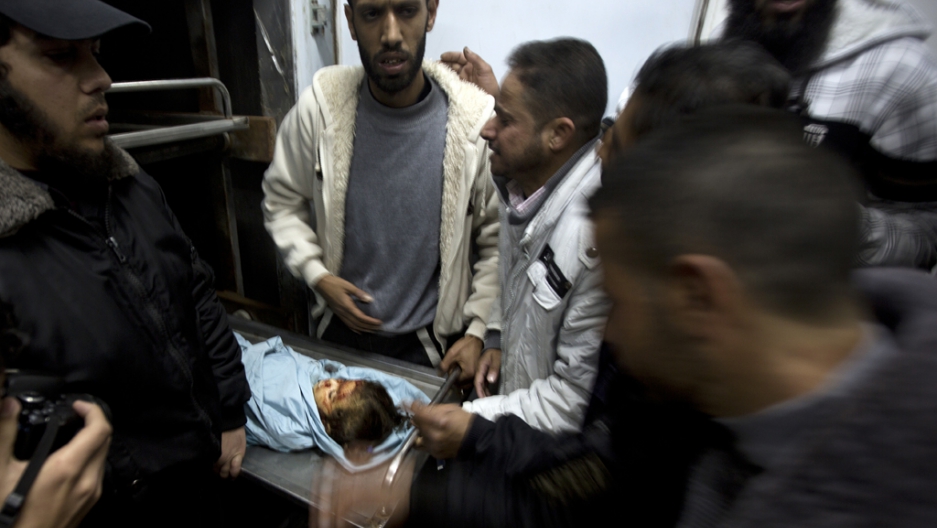 A relative of three-year-old Palestinian girl Hala Abu Sabikha identifies her as she lies in the morgue of a hospital in Deir al-Balah in the central Gaza Strip on December 24, 2013.
Credit: MAHMUD HAMS
Share

The BBC cited doctors saying the girl's mother and two brothers were also wounded in the airstrike.

Medics named the girl as Hala Abu Sabikha from the central Gaza Strip.

The Israeli military confirmed it had carried out an airstrike on Gaza Tuesday, in retaliation for the shooting of an Israeli civilian.

The man, who was reportedly doing maintenance work on the border, was shot by a Gazan sniper and pronounced dead on Tuesday.

Israeli media identified the man as Salah Abu Latif, 22, a civilian employee of the IDF killed on his first day on the job at Israel-Gaza border.

More from GlobalPost: Israel built a new border wall to prevent migrants from 'smuggling in terror'

He was the first Israeli killed on the Gaza border in over a year.

"This is a very severe incident and we will not let it go unanswered," he said in a statement.

"Our policy until now has been to act beforehand and to respond in force, and this is how we will act regarding this incident as well."

The Israeli Defense Forces released this statement about the airstrike:

A Gaza sniper killed an Israeli civilian early Tuesday by firing a single bullet at his chest. The individual was shot while doing maintenance along the Israel-Gaza security fence in the northern Gaza Strip. This is the first Israeli civilian killed in the vicinity of the Gaza Strip since Operation Pillar of Defense.

Noga Tarnopolsky contributed to this report from Israel.