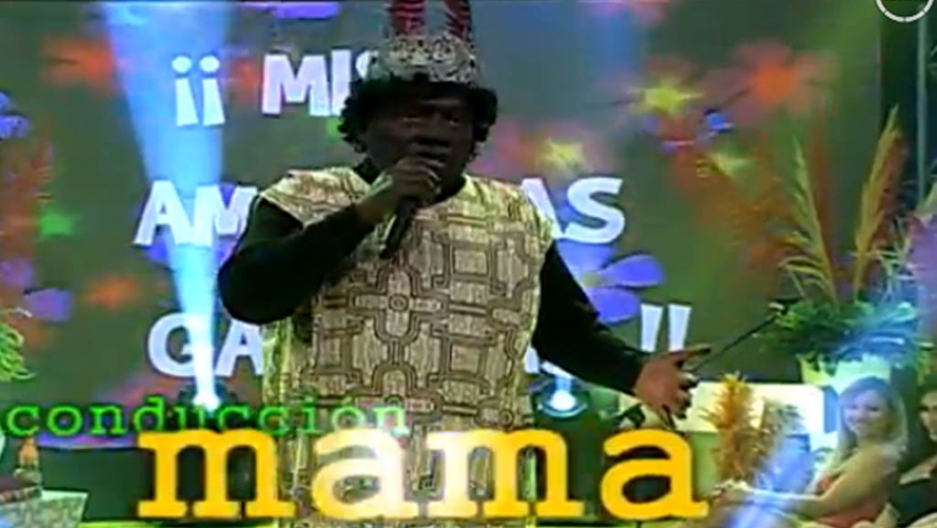 LIMA, Peru — When one of Peru’s leading TV stations was fined for racism earlier this year, you might have thought it would drop the offending comedy character, Negro Mama.

But despite the 74,000 soles ($26,000) sanction, Negro Mama continues to star in Frecuencia Latina’s raucous flagship entertainment show, “The Humor Special,” which airs at primetime on Saturday night.

Critics say the character, played by comedian Jorge Benavides, in blackface, and made up with grotesquely flaring nostrils and thick lips, relies on crude stereotypes.

Not the least of those is that the character — which despite the name is male — is dimwitted, as you can see here in this recent skit about bribing a police officer.

“It is denigrating, an embarrassment,” says Jorge Ramirez, head of ASONEDH, a nonprofit that provides legal aid to Afro-Peruvians.

“We are where the United States was in the 1950s. It would be unthinkable today there but it still exists here.”

Frecuencia Latina declined to comment. But for Ramirez and other black activists, Negro Mama highlights the plight of the Afro-Peruvian community and the casual bigotry that its members routinely endure.

Although lauded for their music, food and athletes — above all in Peru’s two most popular sports, soccer and volleyball — prejudice against them is widespread.

Ramirez, a defense attorney, talks of a judge who refused to believe he was a lawyer rather than a suspect, and of being mistaken for a chauffeur when he parks his car in upmarket neighborhoods.

He also mentions how, while dining recently in a restaurant, a woman at a nearby table warned her child that Ramirez, a large black man, would carry her off if she did not behave. “It was not even under her breath,” he says of the remark. “It was virtually in my face.”

Roughly 10 percent of Peru’s 30 million population is thought to be descended from African slaves.

Most live on the coastal plain, where their ancestors once were forced to work on sugar and cotton plantations. But no one knows for sure as the last time the national census included Afro-Peruvians as a category was in 1940.

That is about to change. Officials are researching the best questions to determine ethnicity, including for Afro-Peruvians, in the next census, scheduled for 2017.

Campaigners hope that will finally put an end to the “invisibility” that human rights groups say has cloaked Afro-Peruvians since they were freed as slaves in 1854.

According to the Defensoria del Pueblo, Peru’s official human rights watchdog, 54 percent of Afro-Peruvians say they have been verbally abused in the street as a result of their race. And 44 percent say they are discriminated against in stores.

Meanwhile, Afro-Peruvians are overrepresented in jails and underrepresented in universities, while 70 percent have failed to seek medical treatment due to a fear of being discriminated against by medical staff.

In a 2011 report, the Defensoria warned that the discrimination faced by blacks in Peru “generates worrying psychological impacts due to the low self-esteem as a consequence of racism.”

Part of the problem is rooted in the country’s education system, says Dante Ponce de Leon, of the Defensoria. “The contributions of Afro-Peruvians are not recognized,” he adds.

“They teach you: ‘They were slaves. We brought them over here. A president, Ramon Castillo, freed them.’ They [Afro-Peruvians] are represented as passive. It is a way of reaffirming their condition of slavery.”

Discriminating on grounds of race is actually illegal in Peru. Introduced in 2000, Article 323 of the national criminal code punishes it, including inciting others to racist acts, with up to 120 days of community service or three years behind bars.

But prosecutions are all but unheard of. “Many people don’t denounce racism. Afro-Peruvians don’t even realize it is crime,” says Ramirez. “They think it is a normal attitude.”

Roughly one-third of Latin Americans, around 150 million people, are descended from African slaves, according to the Organization of American States. The group's human rights arm says they continue to suffer “structural discrimination” across the region in everything from education and health care to housing and, of course, the job market.

Yet, Ramirez and others believe the plight of Afro-Peruvians may be the most intense in Latin America, partly due to the community’s failure — so far — to organize, and the lack of awareness here, among blacks and others, about racism.

“When you talk about Peru, you think about Machu Picchu and the Incas,” says Marco Antonio Ramirez, a 21-year-old law student and leader of Ashanti, a new grouping for young black professionals.

“Even Peruvians think that. People think we are all Andean or indigenous. We [Afro-Peruvians] are invisible. We don’t have [Afro-Peruvian] leaders. There are artists and athletes but not other role models.”

Meanwhile, the first and only Afro-Peruvian cabinet minister to date, internationally acclaimed singer, Susana Baca, lasted just three months in her job as culture secretary in 2011, clearly out of her depth and unwilling to give up her concert tours.

But Monica Carrillo, of LUNDU, the group that launched the complaint against Negro Mama, believes that as well as laws and leaders, public attitudes need to change.

Only then, when viewers switch off shows, will TV stations like Frecuencia Latina drop the kind of crude racial stereotyping that ceased to be acceptable in many other parts of the world decades ago.