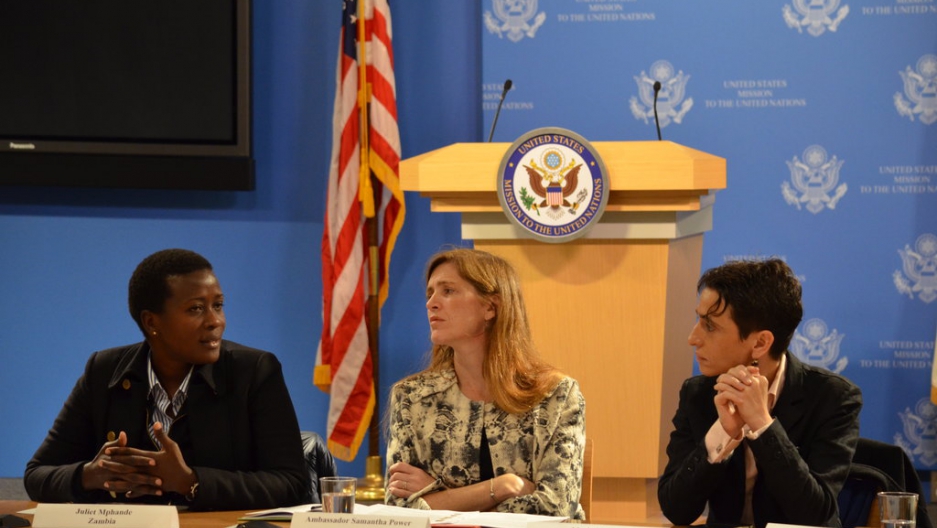 For gay rights activists in most African countries, the fight for same-sex marriage is a long way off. The prevalence of homophobia — hate crimes, societal repression and government-encouraged intolerance of gay sex — is so severe that many gay people cannot live openly and African activists who ask the government for fundamental human rights risk imprisonment or death. A number of experts say such activism could actually make the problem worse in some countries.

Case in point: the Ugandan parliament passed a law Friday that would imprison gay people for life for committing acts of “aggravated homosexuality.” The bill had been a matter of global activist concern since its introduction in 2010, though the new law excludes the death penalty clause that earned it the moniker the “Kill the Gays Bill.”

In Zimbabwe, the issue of homosexuality had been a key feature of President Robert Mugabe's re-election campaign, gay rights offices have endured raids and its members been detained.

And Cameroon and Nigeria are considered among the world’s most anti-gay countries—places where people have been sentenced to years in prison and activists have been killed in targeted attacks.

Experts are also asking the international community to focus on Zambia, where homophobia has collided with freedom of expression, leading to blatant speech violations. The country has criminalized same-sex sexual activity, making it punishable by up to 14 years in prison. In April 2013, an activist was arrested and charged with "inciting the public to take part in indecent activities" the day after he appeared on live television arguing that the country should respect same-sex relationships. Anti-gay sentiment is so intense, activists have said, that sometimes young gays and lesbians are turned in to police by their own families.

Conditions are similar in Malawi, Namibia, Ethiopia and other African nations.

These issues were exactly the topic at a delegation hosted by the International Gay and Lesbian Human Rights Commission (IGLHRC) in the second week of December.

The gathering drew together over twenty LGBTI (lesbian, gay, bisexual, transgender, intersex) advocates and human rights activists from all around the world for inter-regional meetings with United Nations officials, government representatives and the media. The conference, which took place in New York City, included representatives from foreign missions and of several nations including the United States, United Kingdom and the European Union. Activists Chesterfield Samba of Zambia’s Gays and Lesbians of Zimbabwe (GALZ), Gift Trapence of Malawi’s Centre for the Development of People, Friedel Dausab of Namibia and Juliet Mphande of Rainka Zambia made up the Africa delegation.

The human rights defenders, officials and representatives discussed the need for change in Africa, and talked about the monumental challenges each of their countries face, ultimately receiving commitments to help from Western officials like President Barack Obama’s newly appointed permanent representative to the UN, Samantha Power.

Power pledged to "do everything" she can to support African activists’ "urgent and ultimately lifesaving and life-giving work."

"To continue changing laws, ending violence, enlightening minds, and opening hearts, we must go forward on every front – locally, as you all demonstrate, and globally," she said.

She strongly criticized countries that deny LGBTI communities the right to live freely, specifically singling out Russia’s ban on gay "propaganda" to minors as “outrageous” and “dangerous.”

The Western form of activism, according to Zambian Reverend Kapya Kaoma of Christ Church in Hyde Park, Massachusetts where he currently lives, operates through a mode of “shouting it out and making public statements," usually in front of the press, which is more harmful for African gay rights than it is helpful.

"Western human rights organizations are putting so much pressure on their leaders to publicly speak out against what they perceive to be homophobia," said Kaoma, author of Globalizing the Culture Wars: US Conservatives, African Churches, and Homophobia. This approach "may work in the US," he said, but it does not work in Africa.

Displays like those of British Prime Minister David Cameron, who in 2011 said his government would consider withholding foreign aid to commonwealth countries that enact severe anti-gay legislation, such as Uganda’s bill, now law..

President Barack Obama in the same year announced that the US administration would consider a country’s LGBTI rights record in the allocation of foreign aid. And in June 2013 Obama held a joint press conference in Senegal with Senegalese President Macy Sall, saying, "I don't believe in discrimination of any sort."

But threats to cut foreign aid, and public criticism of African government leaders, many are saying, undermine locals’ advocacy work.

“We’re not asking the UK or foreign governments to cut aid to Africa,” said Zambia’s Juliet Mphande. “LGBTI individuals are also Africans, so ultimately we all benefit from that aid.”

The problem, Namibia’s Friedel Dausab argued, is that such drastic, public stances reduce the work of advocacy groups to that of Western-inspired “neo-colonialists.”

“Cameron went out of his way and made it very difficult for us," said Dausab who works in HIV prevention. "All of a sudden, we’re tagged as puppets of Western imperial values. What Cameron should have done is to acknowledge that the anti-sodomy laws we have are a legacy of British colonialism in the region.”

Rev. Kaoma agreed. Threats of punitive measures from the US and UK, he wrote in a 2012 article, do little more than “legitimize religious conservatives’ contention that homosexuality is a Western import. Human rights advocates–rather than US Christian Right actors–are cast as neocolonialists.”

“This dynamic raises questions about whether Western diplomacy might be practiced more effectively away from the lights and cameras,” the article continued, adding that diplomats must stand firm and cannot back down when they threaten to sanction countries with institutionalized homophobia.

At the conference, Kaoma said that President Obama might have achieved “a lot of good” had he called the president of Senegal, for example, for a closed meeting and told him he was concerned about the livelihoods of LGBTI citizens in that country.

“In the US context, it works to be public,” he said. “In Africa, it reinforces the myth that the western word is the one which is exporting homosexuality into Africa."

But Ambassador Power rejected that perception, saying “to criticize the criminalization of LGBT status is not cultural imperialism. To deny gays and lesbians the right to live freely and to threaten them with discrimination and even death is not a form of moral or religious Puritanism. It’s in fact barbarism.”

The activists ultimately suggested that the challenge in Africa is democracy, good governance and access to justice. There is a need, Malawi’s Gift Trapence said, for Western nations to invest more heavily in the empowerment of Africans to claim their rights, so that they can then “take their own countries to task.”

Western human rights and LGBTI advocacy communities, as well as Western media and embassies, should consult more closely with local gay-rights groups in Africa and create opportunities for activists to connect with their own African leaders and diplomats, the discussion concluded. Western governments should provide concrete resources including scholarships to help LGBTI Africans go to school and conduct research since, often times, a lack of supportive families inhibits their abilities to receive an education, placing them among the least educated communities in Africa.

Providing these resources without applying the public pressure that so often fosters a backlash, Kaoma wrote, can eliminate the idea of Western-imported homosexuality.

“They [Westerners] have already shown that it can be highly effective to challenge the US Christian Right individuals and groups who fan the flames of homophobia,” he said. “Exposing their true neocolonial roots is essential in order to defend LGBT people throughout sub-Saharan Africa.”