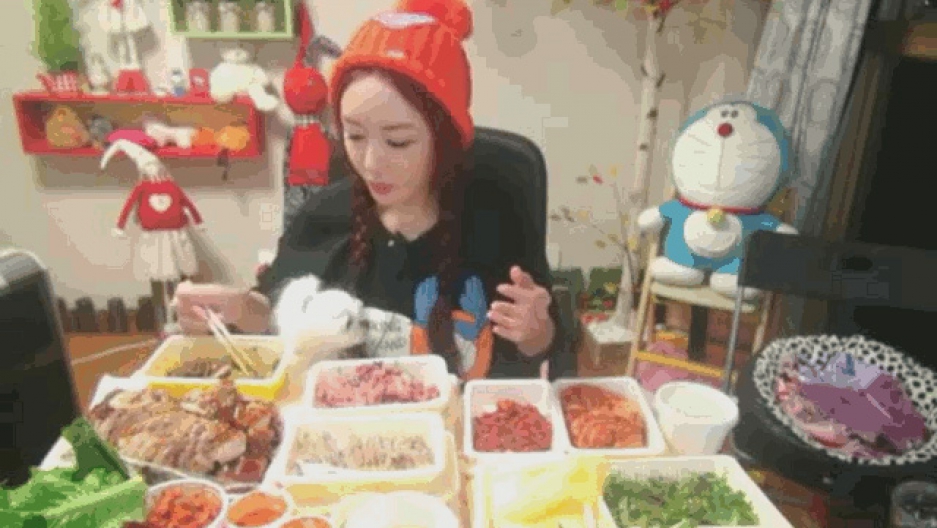 The Diva, a broadcast jockey on Afreeca TV, enjoys her dinner while live-streaming it to thousands of fans.
Share

Remember the one about how you're not supposed to talk with your mouth full?

Korea didn't get the memo.

It's called "mok-bang" — a combo of the Korean words for "eating" and "broadcast" — and it's basically that: people live-streaming themselves eating dinner.

Usually they are pretty excited about what's on the menu. Behold:

The "mok-bang" trend really took off this fall on Afreeca TV, which is a peer-to-peer, live-streaming service in South Korea, according to the Korean gaming website, kotaku.com.

Afreeca TV differs from YouTube in that viewers pay the live-streamers, or "broadcast jockeys," a virtual currency called Star Balloons as a way of saying thanks.

The origin of this trend is unclear, though some speculate that it is a response to loneliness and not wanting to eat alone. For many it does seems to be a genuine social outlet:

Others appear to be in it for the athleticism involved in eating many cartons of spicy noodles and the subsequent sense of accomplishment one gets from such a feat:

The trend mashes performance and voyeurism in its own special blend.

Meet The Diva. She is a popular broadcast jockey. According to kotaku.com, The Diva is a consultant by day. And by night? She eats. A lot. Like, thousands upon thousands of calories for hours on end.

Sometimes in an evening, The Diva will scarf down two medium pizzas. Other nights, it's 30 fried eggs and a box of crab legs or five packets of instant noodles. Then, there was the night she ate 12 beef patties, 12 fried eggs, three servings of spicy pork kimchi soup and a salad.

Perhaps unsurprisingly she says she has gained 20 lbs since starting her "mok-bang" career.

She also said she spends upwards of $3,000 on food a month now that she is sharing her meals with the world, something she started doing because she was bored.

And here is BJ Lebi, showing off her ability to multitask by eating dinner and answering viewer questions simultaneously.

People want to know things like, "What are you eating? How much can you eat? How often do you use the restroom?"