The 'Great Proletarian Cultural Revolution' turned China upside down for the whole decade starting in 1966. Now, some aging participants in those years of political upheaval are looking back at their own actions and they are offering an apology for what they did.

It was a political fight that spread from the very top of the Chinese leadership to nearly every corner of the People's Republic. The purges, denunciations and violent attacks hurt countless millions of people. Those branded as 'class enemies' were publicly humiliated, forced out of their jobs and homes, and sent into exile. Unknown thousands were simply beaten to death.

The Cultural Revolution is still too politically taboo for open and public debate in China. But on the outskirts of Beijing, there is a theme restaurant called 'Red Classic' that nonetheless celebrates the era of revolutionary fervor.

The waitstaff does double duty as performers, decked out like the infamous 'Red Guards' of the Cultural Revolution. They were the revolutionary youth and fanatic supporters of Mao Zedong responsible for much of the unrest during the late 1960s and early 70s.

The actors strut across the stage chanting political slogans and singing patriotic songs.  "Long live Chairman Mao!" they shout. And they put on a skit in which poor villagers put a dunce cap on a landlord to put him in his place.

The scenes here would be all too familiar to much of the Chinese public who lived through the late 1960s and early 70s. At first glance, the theme restaurant appears to be nothing but good kitschy fun.

But some would find it pretty disturbing.

“The actions of the Red Guards were destructive,” 67-year-old Chen Xiaolu told me from his home in a high-rent district of Beijing. “They were wrong.”

“China has not yet learned the lessons of the Cultural Revolution,” Chen said.

These words carry some weight. Chen is a successful business consultant, a Party member, and the son of Grand Marshal Chen Yi. The late General Chen was a comrade of Mao himself and a former head of the People's Liberation Army.

The general's son was at the center of the storm when the Cultural Revolution began in the summer of 1966. The young Chen organized a meeting to criticize teachers and administrators at Beijing's elite Number 8 Middle School. And things got out of hand.

“The event took place in the music hall,” Chen explained. “The violence happened on the stage, so all the students could see. It was a very formal event, so the influence was extremely bad.”

Chen said 10 or more teachers and administrators were beaten bloody that day. Later, the school's principal killed herself. Another teacher was beaten to death by students.

“It was similar to Pandora's Box,” Chen explained through an interpreter. “Once you've opened the box and let the evil out, it's very difficult to put them back in.”

Chen said he has always felt guilty about his participation in those events. What moved him to do something about it all these years later were some photos from the time showing teachers at Chen's school being abused with students standing by.

This past summer, Chen and a few of his old schoolmates arranged a meeting with some of their teachers from the middle school. They wanted to say they were sorry to the teachers for the role they played as students and revolutionary youth in the upheaval that caused so much suffering. In a letter posted online, Chen wrote:

"I bear direct responsibility for the denouncing, criticism, and forced labor re-education of school leaders, some teachers and students. In the early stages of the movement, I actively rebelled and organized the denunciations of school leaders. When I later served as the director of the school’s Revolutionary Committee, I wasn’t brave enough to stop the inhumane persecutions, because I feared I would be accused of protecting the old ways and being a counter-revolutionary. It was a terrifying time."

In Chen's view, the heart of the problem during the Cultural Revolution was that China lost sight of its own constitution, the rule of law and respect for human rights. By apologizing for his own actions, he said he and former schoolmates hope to generate more discussion about the era.

“We wanted the future generation to know what happened during the Cultural Revolution,” he said.

“People need to remember, for the sake of China's future.” 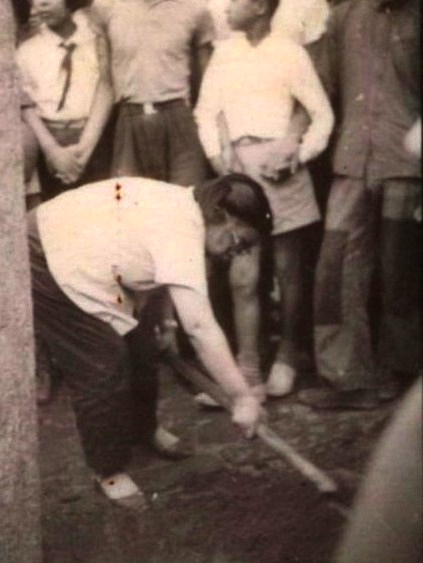 One of the photos that brought back bad memories for Chen Xiaolu.

Others have come forward with expressions of apology, which is not an easy thing to do in a country that places great value on saving face. A recent episode of a Chinese reality show called “Please Forgive Me,” featured a 61-year-old man apologizing to one of his middle school teachers.

The man named Zhang said he was 14-years-old at the time. He confessed to taking advantage of the chaotic situation during the Cultural Revolution to unfairly criticizing a teacher he didn't like. The teacher was roughed up by students and then fired. Zhang said he took part in the reality show because he felt bad about what happened and wanted to seek forgiveness from the teacher.

It is worth pointing out that the apologies from both Zhang and Chen are personal. These were not official expressions of remorse from the Chinese government, which would rather not have people looking too closely at one of China's darkest chapters.

Wu Di is the editor of an academic journal disseminated by email about the Cultural Revolution, called “Memory.”

“I do not think that these apologies will have a big impact on people reflecting on the Cultural Revolution or the Mao era,” Wu said.

“These [personal] apologies lack reflection on why people were beating people.”

Wu said the violence during Mao's final years in power did not just come from individual members of the public making bad decisions. “These actions had a social context,” he said.

Wu agreed with the point made by Chen, that people need to understand the Cultural Revolution better. They need to talk about it, read about it, and look at what went wrong, he said. But, “the authorities do not encourage this,” he added.

“What would be really meaningful is for them to come clean.”