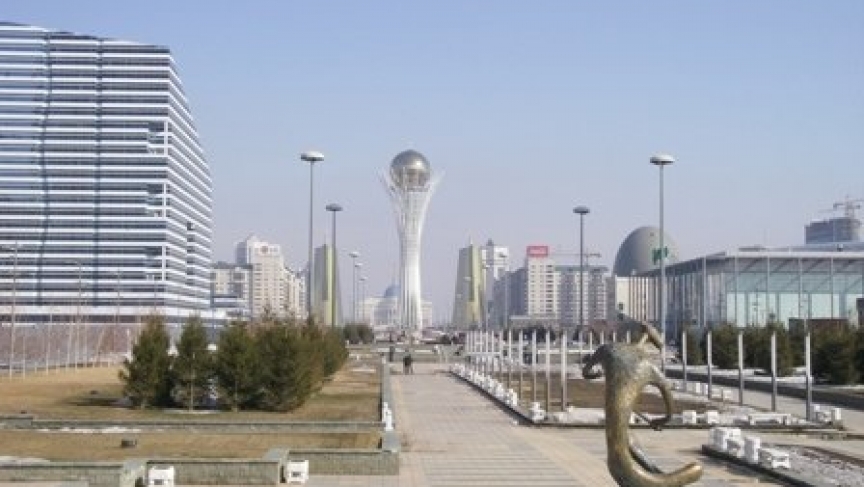 The Baiterek towers in Kazakhstan's capital.

Tim Suchsland taught English for two years in the US Peace Corps in the small remote village of Yavlenka, Kazakhstan. And that inspired him to submit a question for our World Quiz.

But rather than take us to Yavlenka, Suchsland wants to know about the capital of Kazakhstan, a place he described as "a totally different world compared to where" he was serving.

"It's a fast growing and dynamic city that has had many names over the years,  Akmola, and later Tselinigrad during the Soviet years, and then it was conveniently named "Capital" in 1998. What is 'Capital's' Kazakh name today?" he asked.

The answer to the World Quiz today is the capital's Kazakh name: Astana.

"Teaching English in Kazakhstan to Kazakh and Russian kids was worthwhile and great experience especially coming straight out of college and going into this foreign country and teaching," Suchsland said. "It's interesting just because as the only American that most people in my village would ever see, some people thought we were spies, some thought we were just inexperienced kids, but students were really fascinated by who this stranger is and where is he coming from."

Suchsland says he still remembers some of his students: Alibek, Shinar, Gullah, and Nassia.

"A majority of the people speak Russian in Kazakhstan, it's kind of the lingua franca of the country but the government is putting a lot of effort to reviving Kazakh the language," he added. "The expression that I learned best is 'Men qazaqsha soyley almaymen' — which means 'I do not speak Kazakh' but whenever I said that when people asked me if I spoke Kazakh, they just loved it. They thought it was amazing that an American could even say that."

But back to Astana. The country is really pushing the capital as this new symbol of the republic, Suchsland added.

"They talk about a building called the Bayterek, which is a space-aged looking tower. It basically looks like the World Cup trophy. I eventually went and visited the Bayterek and went up to the observation deck," he said. It has a great view of the rest of the city, the capital, of all the constructon that's going on because there's tons of new investment, oil money coming in.

From one side of the new tower you see the new presidential palace, and then in the other direction, four years ago when Suchsland was there, they were building the largest tent in the world.

"I think today [it's] now a shopping mall and a water park. This view is unreal because, when you come from a small village, I mean the tallest building is just 2 stories high, and all the building are old Soviet style buildings. But when you go to the capital, it's new architecture going up everywhere, so its really interesting to experience the Bayterek."