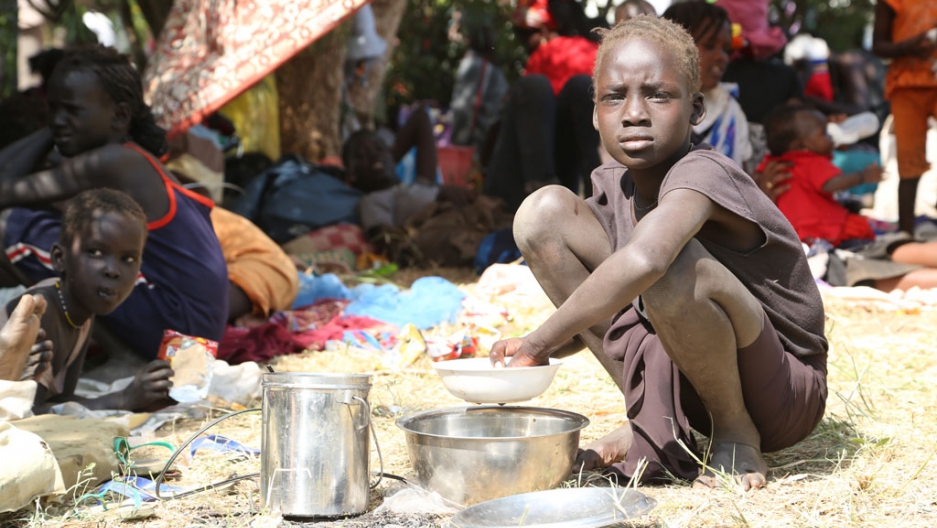 A young girl displaced following recent fighting in Juba, South Sudan, prepares a meal inside the UNMISS compound on December 17, 2013 on the outskirts of the capital.
Credit: STR
Share

“The forces of Gatdet are fighting civilians,” he said. “There’s anxiety, there’s panic, there’s everything. I am afraid another massacre may have been committed here in Bor.”

India's UN envoy said three Indian peacekeepers were killed in an attack on a UN base at Akobo in Jonglei. Ambassador Asoke Mukerji said the three were "targeted and killed" by Nuer rebels at the base where 30 civilians had sought refuge.

Bor was the site of a massacre in 1991, when hundreds of people belonging to the Dinka tribe were killed.

The government — headed by President Salva Kiir — has accused Machar of attempting to stage a coup on Dec. 15. Machar denies the allegations.

Some 500 people have been killed in clashes between Machar loyalists and government soldiers in Juba, the capital, over the past week.

New York-based Human Rights Watch released a statement Thursday, warning that government soldiers were targeting civilians belonging to Machar’s Nuer ethnic group in the clashes in Juba, while rebel soldiers in Bor targeted civilians who are Dinka, like Kiir.

A team of mediators from the Addis Ababa-based African Union arrived in Juba on Thursday to try to put an end to the fighting with a peace deal.

Kiir, who fired Machar along with his entire cabinet in July, said Wednesday that he’s willing to meet with Machar. “I will still sit down with him so that we talk,” Kiir told reporters in Juba. “As to the outcome of the talks, I will not be able to tell you.”