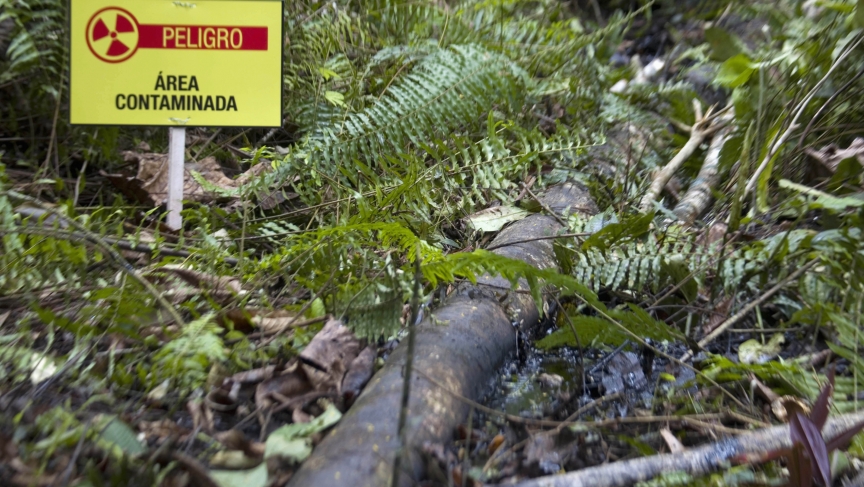 A pollution warning sign is seen near a contaminated oil pool, said to be caused by Chevron-Texaco, in Aguarico, 298 miles east of Quito, September 17, 2013. Ecuador's President Rafael Correa appealed for global solidarity to force the oil company to assume its responsibility to the small Andean country.

It's a legal battle spanning decades and countries.

The residents of Ecuador's Lago Agrio region have been pursuing a case against Chevron oil company.

This week, a judge ruled that the Ecuadorians can pursue their case against Chevron in Canada. The residents are trying to collect damages that were awarded to them by a court in Ecuador.

They had originally sued Chevron after the company was found guilty — in Ecuador — of contaminating a large area of the Amazon jungle. Chevron was ordered to pay $18 billion in damages.

The company refused, saying the ruling in Ecuador was influenced by fraud and bribery. But now a Canadian judge has ruled in favor of the plaintiffs, giving them a green light to seek a reduced payment of $9.5 billion.

"Before the judgment was earned against Chevron in Ecuador, Chevron and Texaco removed all their assets out of Ecuador, so there are no assets of Chevron's in Ecuador," said Christopher Gowen, a member of the legal team working with the Ecuadorians. "So to collect on this judgment for the people of Ecuador, to have their water cleaned, they have to go to other countries where Chevron has billions and billions of dollars in assets. And Canada is one of those countries that have assets."

The Court of Appeal for Ontario said the 47 villagers have the right to pursue Chevron’s Canada assets. The decision reverses a previous ruling that stated the company did not have any assets in Canada.

A court in Ecuador in 2011 found the company liable for about three decades of soil and water pollution near oil wells that ruined the health and livelihoods of the Amazon rainforest dwellers.

"They built these giant pits in Ecuador and dumped them and those pits leaked into the Amazon and the water is completely contaminated," said Gowen. "The judge wrote that Chevron's spokesperson has said that they would fight this case until hell freezes over, and then they would fight it on the ice. The judge said that Ontario is where the ice is and you're going to have to fight it in Ontario."

Chevron contends that Texaco, which it acquired, had signed an agreement with Ecuador in 1998 and paid $40 million to clean the pollution, and the company was then absolved of any future liability.

Villagers argue that the agreement does not exempt the company from third-party claims.

"It's certainly discouraging when you see how much money Chevron has and the amount of delay they can achieve with all the money they have," said Gowen. "But maybe by the time my 3-year-old has graduated from law school, she can enforce this judgment. It's going to take time."

In a statement, Chevron Corp. said it is considering its next steps, including an appeal to the Supreme Court of Canada.

This story has been updated with additional information and a link to Chevron's position in the case.