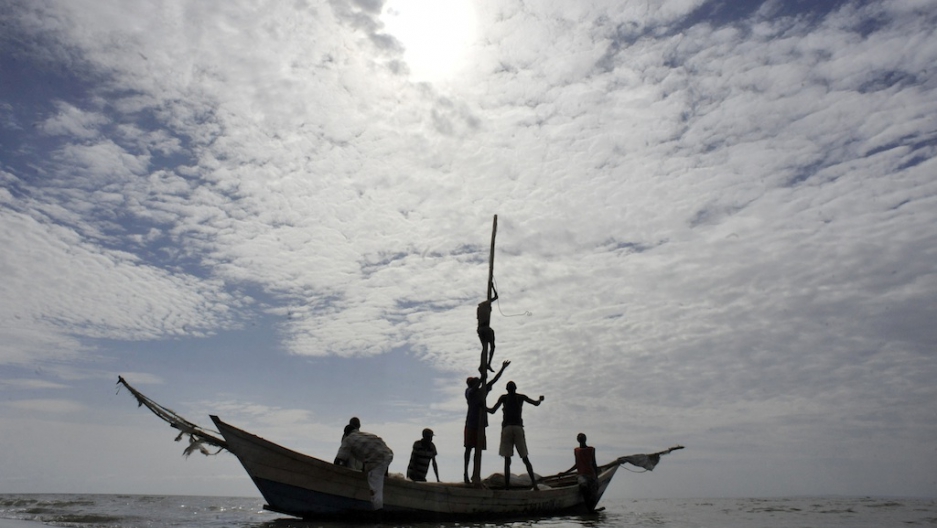 Fishermen in Lake Turkana head out for their daily catch on August 10, 2011.
Credit: Simon Maina
Share

NAIROBI, Kenya — In the rugged and remote expanse of land that spreads across the border between Kenya and Ethiopia a modern dam is killing an ancient lake.

Lake Turkana is the world’s largest “desert sea," a vast turquoise ocean in an unremittingly harsh place of wind, heat and dust.

Its waters keep the cattle of semi-nomadic pastoralists alive in times of drought and its fish feed the people.

It is one of the origins of mankind where, according to the fossil record, the earliest human ancestors rose up on two legs and began to walk, and it has been designated a UNESCO World Heritage Site.

Yet it is threatened with extinction by Africa’s largest hydroelectric dam which is already around three-quarters built and likely to be completed in 2014.

The Gilgel Gibe III Hydroelectric dam on the Omo River in southern Ethiopia will be 243 meters high. The project is expected to generate up to 1,860 megawatts of energy, and to supply enough water to irrigate 150,000 hectares of agricultural plantations.

The dam is key to the economic future that Ethiopia’s leaders have mapped out for their country. But experts say it will also destroy Lake Turkana just across the border in Kenya.

“The result could be another Aral Sea disaster in the making,” writes Sean Avery, a Nairobi-based hydrologist in a new report published by the Africa Studies Centre at the University of Oxford.

The Aral Sea in Central Asia was one of the world’s largest lakes until Soviet irrigation projects diverted the rivers that fed it, reducing the lake to a tiny fraction of its original size.

For its part, Lake Turkana is slightly salty and shallow.

Only 30 meters deep on average, Avery predicts water levels could fall by 20 meters, turning the lake into two separate, outsized puddles — one fed by the remnants of the Omo, the other by the smaller Kerio and Turkwel rivers.

Salinity levels are expected to rise as the surface area shrinks, making the lake unlivable for fish, hippos and crocodiles and undrinkable for cattle and people.

“Lake Turkana depends on the Omo River for 90 percent of its water,” said Ikal Angelei, director of Friends of Lake Turkana who was awarded the 2012 Goldman Prize in recognition of her efforts to save the lake and the livelihoods of the people who depend on it.

“If you reduce the freshwater coming in you change the chemical composition of the lake,” she told GlobalPost. Up to 300,000 people rely on the lake to survive, she added.

Ethiopia’s government says that once the Gibe III dam is filled up in two and a half years, a constant stream of water will be permitted to flow down the Omo valley and into Lake Turkana.

But Angelei said this will not solve the problem.

“It’s the natural increases and decreases in water flow that allows the ecosystem to survive,” she said.

Fish breeding cycles as well as seasonal farming on the river’s floodplains require times of high and low water.

Avery’s report also stated that 30 percent of the Omo’s flow was to be diverted for the irrigation of huge new agricultural plantations.

The rights group accused the Ethiopian government of “arbitrary arrests and detentions, beatings, and other violence” as it forced indigenous people off their lands to make way for state-run sugar plantations, irrigation canals and processing factories.

“Ethiopia’s ambitious plans for the Omo valley appear to ignore the rights of the people who live there,” said the report’s author, Ben Rawlence.

Angelei says the dam threatens people's rights in Turkana too. Kenya’s government has done nothing to defend them.

The governments of both countries have contentious relations with pastoralist people who are frequently derided as backward and uncivilized.

Their very existence is seen as an affront to the sophistication, modernity and forward-leaning economies that the centralized authorities in Addis Ababa and Nairobi seek to project.

The pastoralist people frequently carry guns and disdain the sedentary life of towns and cities, preferring to move with their animals through the wilds.

Despite the expected impact on its people, successive Kenyan governments have raised only muted objections to the dam.

A parliamentary resolution in August 2011 called for construction to be stopped.

But the resolution was not acted on and was then quietly shelved when, 11 months later, the World Bank provided a $684 million loan for the building of a 1,000 kilometer transmission line that will allow Kenya to benefit from the power generated.

Angelei and others hope the scenario they envisage is a worst-case projection, but fear it is also the most realistic.

“Lake Turkana is a [UNESCO] protected area but it’s not being protected. It’s a safe zone in drought periods, it supports fishermen and pastoralists, it has traditional and cultural value and is the cradle of mankind, but it is being ignored,” she said.