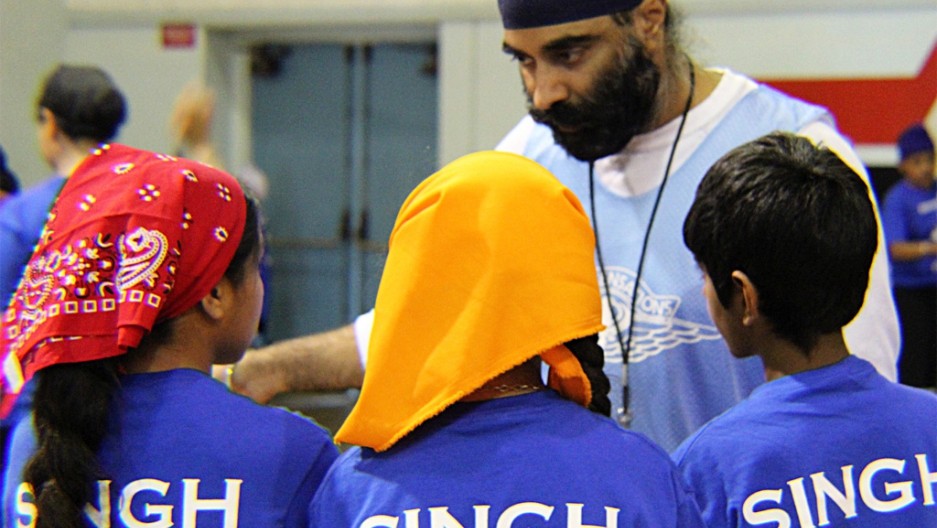 LOS ANGELES — Prateek Singh could not wait to get out onto the court.

With his friends and family packed tightly into a small high school gym, the basketball-obsessed, turban-wearing Prateek took the floor to warm up for his first high school game. It was 1992 and Singh was a sophomore at Burbank High School, a public school in north Los Angeles.

But his first taste of high school sport was interrupted by a brand of bigotry all too familiar to adherents of the Sikh religion living in the United States, including the diasporic hub of Southern California.

“One of the referees came up to our coach and said, ‘That kid over there — with that thing on his head — can’t play in the game,’” said Prateek, now in his mid-30s. “I still hold that to heart.”

That “thing” was Prateek’s dastar, or turban, a staple amongst devout male Sikhs that represents piety and self-respect. For the rest of the season, Prateek had to present a letter from the California Interscholastic Federation (CIF) each game that allowed him to play in his turban.

Today Prateek is the treasurer of a top-tier mortgage company and a coach at the Singh Sensations Basketball Camp, a free, annual workshop for young Southern California Sikhs.

He knows well that Sikhs living in much of the Western world are often scapegoated, sometimes confused for Muslims because of their turbans, their facial hair and the way they dress. In the US, the sight of a turban-adorned man can conjure images of Iran’s ayatollahs or more recently Al Qaeda’s deceased figurehead, Osama bin Laden.

In addition to teaching basketball skills, coaches at the Singh Sensations camp — a play on an extremely common Sikh last name, derived from the world for “lion” in Sanskrit — boost players’ confidence in themselves and their Sikh identities.

“We want to encourage the kids to maintain their appearance, and stress to them that you can be a full Sikh and still do everything that everyone else does,” Singh said at this year’s camp, which hosted roughly 100 local Sikh boys and girls ages eight to 18.

“That’s the message that we have for the kids,” he said. “And at the same time, do those things with love, with care and with respect.”

In the wake of the 9/11 terrorist attacks, misinformation about the Sikh community has contributed to an uptick in discrimination and violence, according to the Sikh Coalition, a non-profit advocacy group. The violence reached a crescendo last year when Wade Michael Page, a white supremacist and US Army veteran, fatally shot six people at a gurdwara — or Sikh house of worship — in Oak Creek, Wisc.

In lieu of the Oak Creek shooting, the FBI announced this June that it would, for the first time, begin tracking hate crimes against Sikhs, Hindus, Arabs and other minority groups in 2015, the first such database of its kind in the US.

While a major victory for those who champion Sikh rights, Vinay Lal, a professor of history at UCLA, said the fundamental problem Sikhs face is that there is a colossal unawareness of who they are and what they represent.

“The Sikhs today are the most visible in the US because of the way they look… but they are also the least visible, because they are an unknown entity,” Lal, who lectures on the Sikh diaspora, said. “It is the great irony of the Sikh community.”

For Bhajneet Singh, a principal organizer for the Singh Sensations Basketball Camp, visibility is paramount to help the broader community understand and accept Sikhs.

“Sports are that unifying device,” Bhajneet, 31, said. “Sometimes we can’t escape prejudice, or racist mentalities. But, all of a sudden, you put someone on the basketball court. Then everyone is equal because you’re after the same goal.”

Standing at center court inside the Portola Middle School gym this past May, Bhajneet lectured to 100 attentive camp attendees, flanked by members of the Singh Sensations team sporting powder blue jerseys, silver wristbands and kirpans, the ceremonial Sikh dagger. He likened obstacles faced in team sports to those in real life, using metaphors to illustrate broader points about Sikhism: One’s basketball coach is like the Guru, for example, each capable of instructing.

The children then broke off into groups by age, accompanied by a member of the Singh Sensations basketball team leading drills, five-on-five scrimmages and shooting contests. After an impressive shooting display, Gurchit Singh, one of the older camp attendees, explained how his love for basketball mirrors that of many American youths, something he says makes him like every other American child.

“Before I get on the court, people wouldn’t really consider me someone who could play basketball,” said Gurchit, 18, who grew up in the US. “And in my eyes, that’s like someone saying I’m not American.”

Gurchit experienced considerable mistreatment while at school because of his turban, he said, particularly when he played sports. “That usually ended when they saw me play,” he said with a smile.

But bullying is not limited to just young boys. The Sikh religion requires that both men and women refrain from cutting their hair. Due to societal pressures, young Sikh women are often chastised in school locker rooms because of visible body hair, Bhajneet said.

“When girls change in locker rooms during physical education, they often get laughed at for having hair on their legs,” he added. “But it’s very important to inspire confidence in our young girls… and sports is among the best ways.”

Playing in a three-on-three scrimmage, Bandagi Kaur, a high school freshman, caught a wayward pass from one of her teammates and subsequently drained a three-point shot from the right corner.

“Just because I’m a girl, doesn’t mean I can’t play basketball,” Bandagi said. She added that it’s important for young girls to come to events like the Singh Sensations basketball camp because it encourages them to play in their school teams.

“Normally we think team sports are just for the guys,” she added. “But it’s not.”

Unlike the prejudice Prateek faced as a child, discrimination against the Sikh community today is more implicit and subtle. Sikh children in Southern California today can participate in high school sports while wearing clothing essential in their faith, like the Sikh turban, but they do so with the understanding that they may be harassed.

“We never want any of our kids to feel like we did… that they are lesser or lower than anyone else, because they are not,” Prateek said. “We do the camp because we want the kids to see, with their own two eyes, that there are no barriers.”