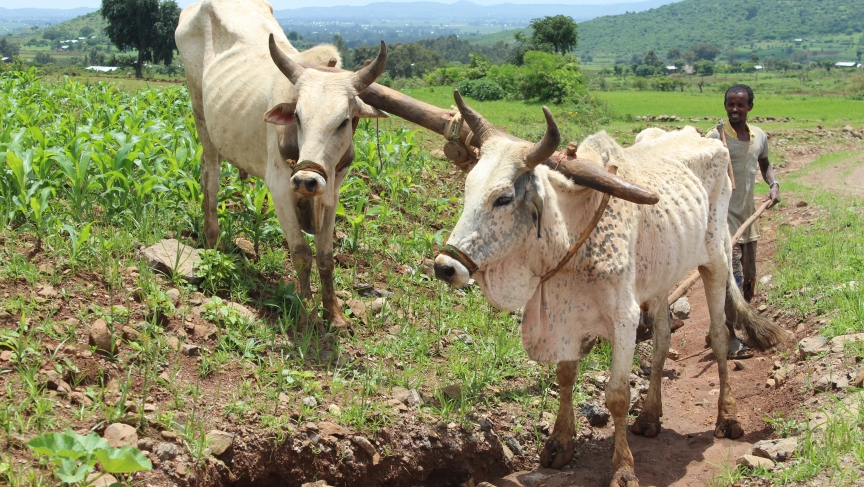 A man from Awra Amba plows the land adjoining the village.

Northern Ethiopia is rugged and poor. It is a place where people mostly get by as subsistence farmers. The government and international organizations like the World Bank have tried and failed for years to improve the well-being of locals. But then, one village went and did it all on its own.

The community is called Awra Amba. About 500 people live here in simple wattle and daub houses, and they keep busy in a variety of money-making activities.

The village has a mill, where grain is crushed into flour. There is a textile factory, where villagers make clothes for themselves and to sell. You will also find a café, a tourist hostel, and two stores that cater to people from outside the village.

With all of these businesses, Awra Amba has managed to pull itself out of poverty. Compared with the rest of the region, the average income here is more than twice as high. Literacy rates are higher than in neighboring villages. Mortality rates are lower.

“Everyone here dreams of becoming more prosperous — that's a big reason why our economy has grown faster than others,” says Zumra Nuru, who founded the village 40 years ago as a kind of utopian community. He says at the time, he was dissatisfied by the injustice he perceived in traditional Ethiopian culture and wanted to organize a society along more egalitarian lines. He also saw the community as a way to increase wealth.

“We use all our time for work and to improve our village,” he says.

One reason the people of Awra Amba are able to work so hard is that they do not follow organized religion.

In neighboring Christian and Muslim villages, residents respect the Sabbath and holidays. “They have quite frequent religious days, so on those days, they don't go to [do] farming work,” says sociologist Ashenafi Alemu of Ethiopia's University of Gondar. “But for Awra Amba, this is not the case. They work every day.”

The lack of religion is not the only competitive advantage for Awra Amba. The village invests a lot of energy in educating its children and diversifying its economy. It also embraces gender equality. You will see women here doing what is traditionally considered “men's work,” like plowing, which effectively doubles the workforce.

But by ignoring the region's customs, Awra Amba has found itself under attack. Neighboring communities view the residents as heretics.

“They threw a grenade right into the center of the village once, but luckily, no one was hurt,” says village founder Zumra Nuru. “They've tried shooting members of our village. They've sabotaged our harvest on occasion.”

In recent years, the grenades and assassination attempts have more or less stopped, but anger and frustration remain.

“The Awra Amba community doesn't have any spiritual beliefs — not a mosque or a church,” says Abraw Argew, a farmer from a neighboring Christian village. “This makes them selfish. I hate the people of Awra Amba.”

The village may be unpopular among its neighbors, but it is becoming a darling of development experts. They say Awra Amba has a lot to teach poor communities about how to reduce poverty. The problem is that few will listen to those lessons, as long as the hostility continues.

In an effort to soothe relations between the village and its neighbors, meetings are being held monthly between residents of Awra Amba and residents of the surrounding villages. They talk about their differences.

"If you embrace religion, this place would be very colorful," said a man from a nearby Christian village at a recent meeting.

A woman from Awra Amba responded, insisting that her community is spiritual and moral, even if it is not part of an organized religion.

“What is religion?” she asked rhetorically. “I don't get it. You see the work we do. We care for each other and help each other. Awra Amba helps to build our country. Our neighbors are unreasonable to hate us.”

And that hatred is diminishing. People from neighboring villages have begun sending their children to the schools that Awra Amba built. They come to get their corn milled. They buy clothes from the factory and goods from the shops.

Through this day-to-day trade, a quiet revolution is happening. Slowly, the hatred is dispersing and is being replaced by a kind of curiosity. “How did this village climb out of poverty?” the people of neighboring communities are starting to ask.

Development experts hope those people will soon ask a related, more promising question: "How can we climb out of poverty, too?"

Credit: Some audio for this story is courtesy of the Awra Amba Experience/Write This Down Productions.