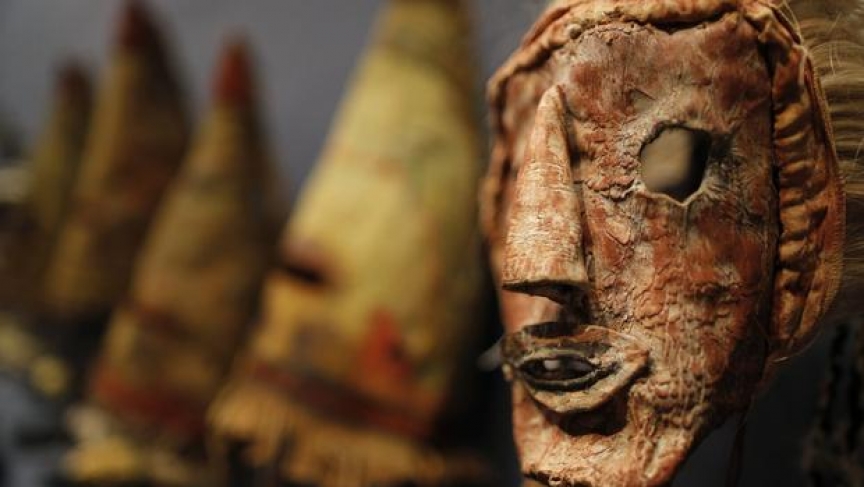 A rare antique tribal mask, circa 1910-1920, revered as a sacred ritual artifact by the Native American Hopi tribe in Arizona is displayed at the Drouot auction house in Paris before auction, December 9, 2013. The Hopi believe the bright, mostly fabric masks are imbued with the spirits of divine messengers.

An American charity, the Annenberg Foundation, and an anonymous donor successfully bid more than $500,000 for two dozen sacred Native American masks. They bought the masks to return them to the Hopi Nation and the San Carlos Apache tribe.

The masks had fallen into private hands. The Hopi sued in French court to stop the auction and the US Embassy protested to France, as well. But the court rejected the claim that the masks were part of the a culture heritage that belonged to the Hopi.

Gregory Annenberg Weingarten, director of the Los Angeles-based Annenberg Foundation, said, "These are not trophies to have on one's mantel. They do not belong in auction houses or private collections.''

Pierre Servan-Schreiber, a lawyer for the Hopi, says the French auctioneers had no idea why the American bidders wanted the masks. "No, they did not, and they did not know that we were coordinated, so as not to bid against one another."

Servan-Shreiber says "it's a very nice outcome for the Hopis, but it's not the end of story." He says there are many such sacred masks, called kachinas. "At some point, there will be the need for a law which will recognise that these katchinas are not to be purchased or sold."

For the Hopis, the masks represent messengers to the spirits of their ancestors. They are used during sacred dance riturals, says Servan-Shreiber. He explains that the Hopi believe humanity has gone through several worlds. "During the last exodus from one world to the other, the spirits of the ancestors were unhappy with the unethical behavior of man, so they  took their children."

The Hopis were sad to see their children go, so they requested the spirits not to do that again, he explains. In exchange they agreed to host sacred dances in which the spirits would be represented by the kachinas. These kachinas are the way the Hopis communicate not only with the spirits of their ancestors, but "between the living and the unliving worlds, between what is, what was, and what will be. It really goes to the heart of their existence," Servan-Shreiber says.

The announcement that the masks would be returned to the Hopi Nation in Arizona and the San Carlos Apache tribe made Sam Tenakhongva smile. The Hopi cultural leader said his "old friends" will be coming home.

"This is a great day for not only the Hopi people, but for the international community as a whole," Tenakhongva says. "The Annenberg Foundation set an example today of how to do the right thing. Our hope is that this act sets an example for others that items of significant cultural and religious value can only be properly cared for by those vested with the proper knowledge and responsibility. They simply cannot be put up for sale.”

Editor's note: We've limited our use of photos for this story to only one. The Hopi prefer to keep these religious objects out of public view and consider it offensive for images of their "old friends" to appear. The AP does not publish images of the objects, though Reuters and AFP news agencies do.