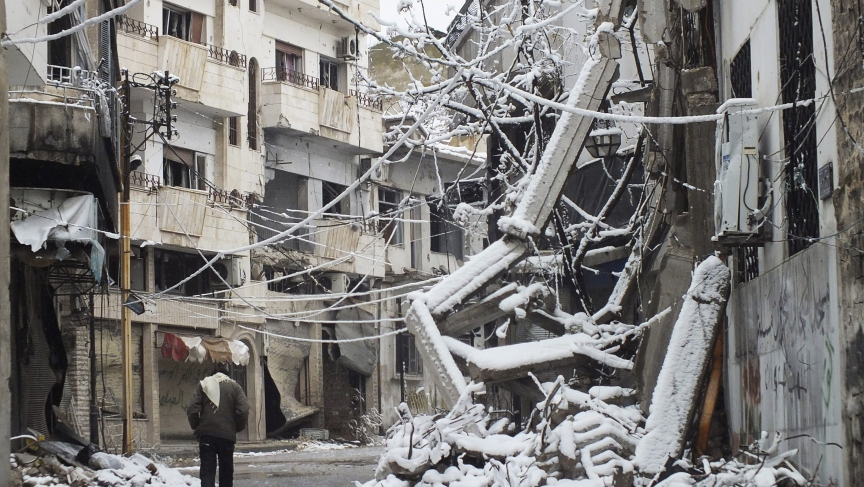 A man walks past debris from damaged buildings covered with snow in the besieged area in Homs, December 11, 2013.

It's been a trying week for Syria. The United States and Britain suspended providing even non-lethal aid to the country. A prominent Syrian opposition leader has gone missing. And now winter has brought snow and cold weather.

The aid was halted, officials say, because Islamist rebels took over bases that belonged to the Western-backed Free Syrian Army (FSA). The foreign aid that was captured consisted of communications equipment, vehicles, and medicines.

BBC's Lyse Doucet, who is in Damascus, says the Syrian government's reaction to the news has been "smug."

"This has been their narrative from even before there were Islamist groups operating in Syria. They have been saying they have been fighting, in their words, against armed groups and terrorists," she says. And the Syrian government has been cautioning the international community about these "terrorists," calling them a threat not just to Syria, but also to the world.

While it's very difficult for independent journalists to get detailed information on the opposition groups, Doucet says, there is a general perception that Islamist forces are prevailing over other rebel groups because they're better armed and organized.

Adding to that, a new alliance called the Islamic Front was formed a few weeks ago, bringing together multiple Islamist groups. It was the alliance that took over the bases.

The Syrian opposition is not happy with the reaction of the US and Britain. They have constantly requested more help from the West.

Doucet says some places, like the city of Homs, are ghost towns. "I've walked through neighborhoods where not a single building is left unmarked by the shrapnel, aerial bombardment. Nothing lives in those areas," she says.

Meanwhile key Syrian opposition leader Razan Zaitouneh was kidnapped. Fellow opposition members are anxious for any news from her.

"She was the one who had still held onto the idea of peaceful protest and trying to bring about peaceful change. There are very few of these people left," says Amr Al-Azm, professor at Shawnee State University in Portsmouth, Ohio, and a member of Zaitouneh's opposition group.

No one has officially claimed her abduction so far, but Al-Azm believes she was taken from an area that was under the control of the Islamic Front.

"If we know who has her, and we know that for sure, then we can bring pressure on them, but the fact that she is missing in this void is of great concern," he adds.

Editor's note: This story was updated to identify Homs as the place Doucet describes as a ghost town.