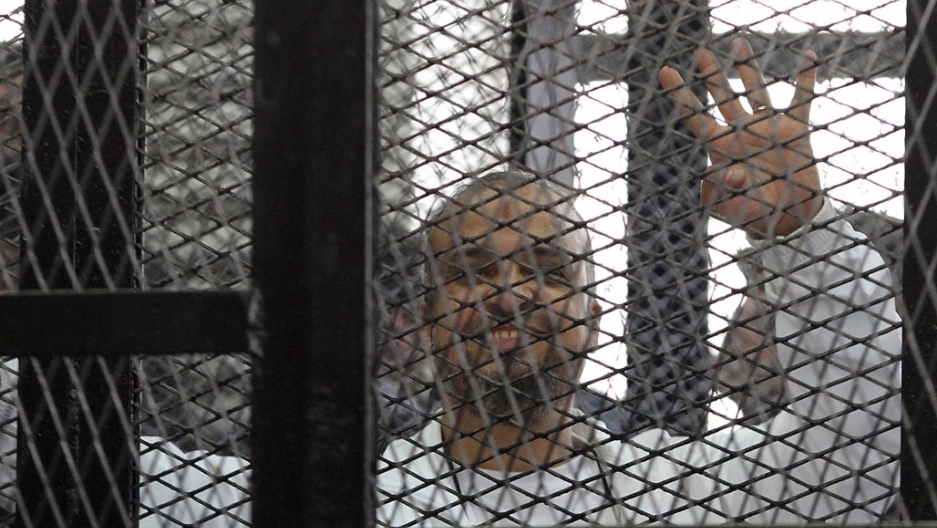 Muslim Brotherhood member Mohamed Beltagy holds up four fingers, called rabaa (four) in Arabic, from the defendants' dock in a Cairo courtroom December 11, 2013. The trial of Egypt's Muslim Brotherhood chief Mohamed Badie and his deputies came to an abrupt end when judges walked out, citing chaos in the dock.
Credit: AFP
Share

Protests spilled from the streets into Egypt’s courts on Wednesday, with Muslim Brotherhood leaders disrupting proceedings with such fervor it led to judges recusing themselves from proceedings.

In all, 34 members of the Muslim Brotherhood face charges from murder to rioting, Agence France-Presse said.

On Wednesday, the three leaders shouted and refused to cooperate as their trials continued.

“The Egyptian people tasted freedom after the revolution (to oust strongman Hosni Mubarak), and since the election of Mohamed Morsi,” Badie shouted at judges. “They will not give up this freedom.”

He also accused Egypt’s leading general, Abdel Fattah al-Sisi, of killing protesters as they prayed during an Aug. 14 crackdown on camps erected to protest Morsi’s arrest.

Judge Mustafa Salama said the case will be transferred to a Cairo appeals court, Reuters reported.

This is the second false start for the Islamist leaders, whose case was delayed in October after many accused refused to attend court.

A panel of three judges to hear that case also quit then.

Egypt’s interim president, Adly Mansour, also said on Wednesday that a constitutional referendum date would be announced this weekend.

State news agency MENA reported the 50 members of a charter reform committee are to witness the announcement Saturday.